The Tegernsee lake is one of the most popular day-trip destinations from Munich as well as being a holiday location in its own right.

It also lies directly on the German Alpine Road tourist drive as it heads south from Bad Tölz. 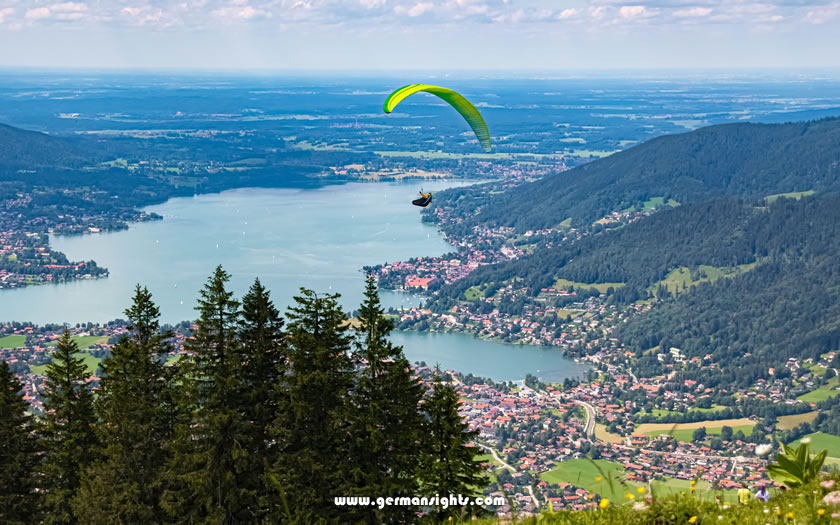 View over the Tegernsee lake in Bavaria

The lake has three main resort towns towards the southern end, including the historic settlement of Tegernsee itself. More information about access and accommodation in the various settlements is available on the lake travel page here:
Tegernsee Hotels & Travel

The Tegernsee lake itself was formed during the expansions and contractions of the glaciers during the various ice ages.

Although evidence of Bronze Age movement through the area has been discovered, even the Romans didn't create any permanent settlements in this valley off to the side of the main transalpine routes. 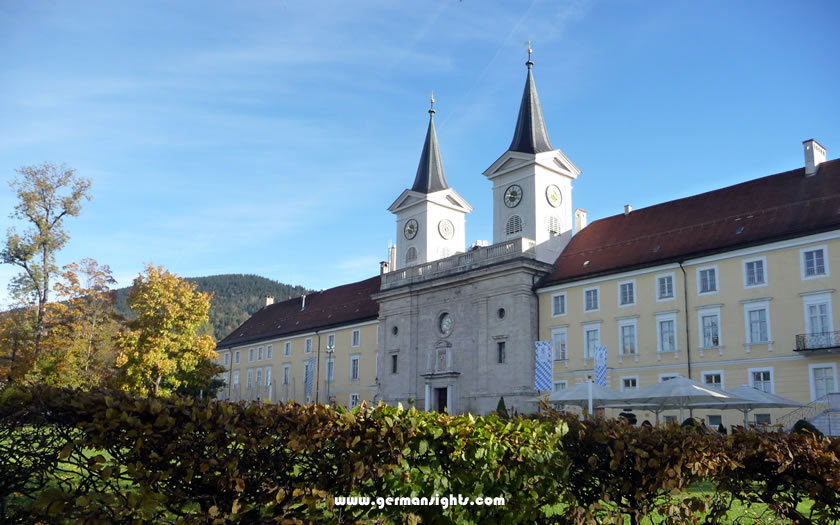 The former abbey in Tegernsee

The first real permanent habitation in the region came in the 8th century, when monks founded the Benedictine monastery at what is now the town of Tegernsee.

Monks from the religious centre of St Gallen (in what is now Switzerland) started with a wooden chapel in the early 8th century and the stone structure was finished in 746 - the date traditionally used for the founding of Tegernsee and the abbey.

There are a number of different stories about the foundation, varying from religious legends through to a hardheaded decision to keep the land out of the hands of outsiders. But most agree that it was two noble brothers who ordered the abbey to be built and it was their services to Rome which enabled the grant of the remains of St Quirinus to the abbey.

Although relatively unknown these days, St Quirinus was an important saint of early Christianity and the fact that his relics were interred at the Tegernsee abbey was important both for prestige and income from pilgrimages to the site.

The abbey soon grew to be the most important religious institution in Upper Bavaria and was protected from the worst effects of religious wars and the plundering of invaders by the location away from the main trade routes and power centres.

Tegernsee abbey also became a centre for religious art and learning. Stained glass windows in the Augsburg cathedral (the oldest in Germany) and the bronze doors of Mainz and Hildesheim were all manufactured here. The abbey library was at one point bigger than that of the Vatican.

The look of the present-day buildings dates from the Baroque period although the planned renovation was stopped from completion by the Napoleonic wars and the eventual secularisation of the abbey.

After the defeat of Napoleon, the abbey fell into the hands of the Wittelsbach ruling family of Bavaria (where it remains).

It was originally used as a summer residence and the fact that the nobility spent time at the lake helped to make tourism fashionable. They also attracted artists and writers hoping for patronage, which increased the prestige of the resorts around the lake.

Nowadays the abbey buildings house a gymnasium (grammar school) and the Tegernsee brewery.

The railway from Munich was opened at the start of the 20th century and the Tegernsee became one of the favourite excursion destinations for those who spent the rest of the week in the big city.

Over the decades it has also become a favourite place for holiday homes or weekend breaks and one of the big challenges of the communities around the lake has been handling the competing demands of tourism and infrastructure.

Despite the fact that its nickname is "Lago di Bonzo" (the meaning 'lake of the fat cats' playing on the popular Italian lake destinations to the south), the lake and shoreline are still mostly accessible to the general public - something that the more residential suburban lakes to the north cannot always claim.

Ferry services operate in the summer months - the most popular being the routes at the southern end between Tegernsee, Bad Wiessee and Rottach-Egern.

The tourist office is located just off the main road in Tegernsee and is open Monday to Friday:
Website: www.tegernsee.com