Sigmaringen is a small town on the banks of the upper Danube river in southern Germany.

It is best-known for the imposing Sigmaringen castle, which forms the centrepiece of the town on a rock outcrop above the banks of the river, and which belongs to the descendants of the Hohenzollern dynasty.

The town is a worthwhile stop for anyone exploring the upper Danube region, especially those who are on a walking or cycling trip along the Danube valley. 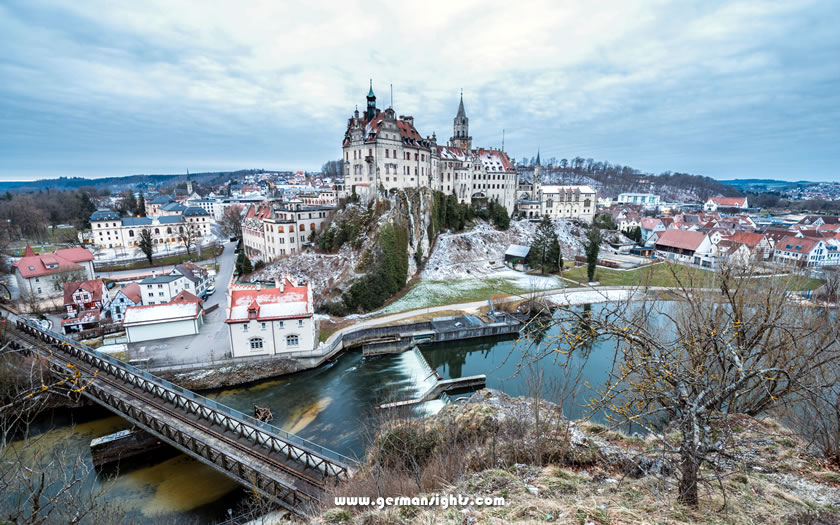 View of Sigmaringen castle and town on the upper Danube

Despite being a relatively small town, Sigmaringen train station actually hosts three different rail connections with services up, down and away from the river. More information about how to get to Sigmaringen and the nearest airport is available on our Sigmaringen travel page along with some options for accommodation:
Sigmaringen Hotels & Travel

Archaeologists have discovered remains of prehistoric settlements in the Danube valley around Sigmaringen. The area has been a route for trade and travel for many centuries and the Romans valued the area to the south of the Swabian Alb for its agricultural potential.

According to the town legend the name stems from an Alemannic leader called Sigmar, who decided to settle where the castle now stands. (The Alemanni were a confederation of German tribes in the later days of Roman rule.) 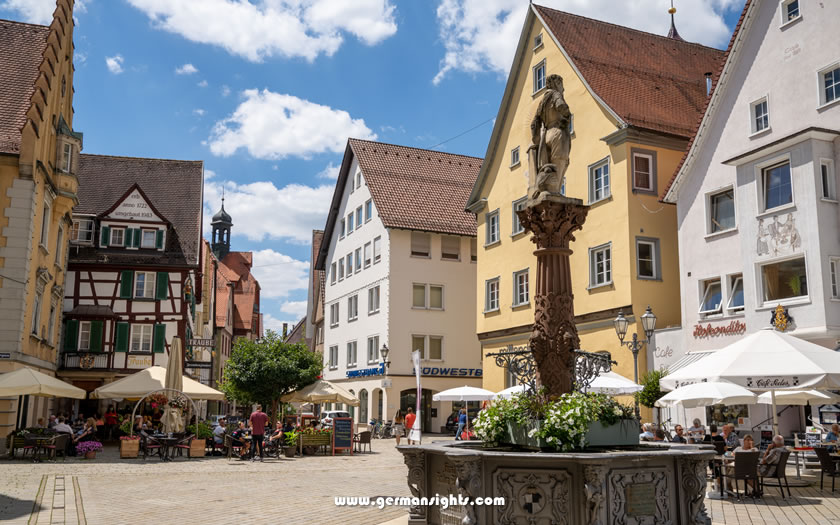 The town centre of Sigmaringen in southern Germany

The first mention of the town was back in the 11th century, when the fortress above the town was attacked by a local king and rescued by the Holy Roman Emperor Henry IV.

Sigmaringen gained its town charter in the 13th century with the year 1250 marking the foundation of the town.

The town and castle, with its strategic importance for the trade routes along the Danube river valley, were frequently the target of attacks during the wars that plagued the Middle Ages.

The town came into the hands of the Hohenzollern dynasty in 1540 and the castle became the seat of the Swabian Hohenzollern family.

The town and castle were captured by Swedish forces during the Thirty Years War but reverted to Hohenzollern rule with the conclusion of hostilities.

The tiny independent state of Hohenzollern-Sigmaringen ruled by its own prince survived the Napoleonic reforms in the early 19th century because of the close connections of the Hohenzollern family to Napoleonic circles.

However it fell victim to the effects of the upheavals in 1848 when Sigmaringen came under the control of Prussia and became known as the "Hohenzollernsche Lande".

The connection between France and Sigmaringen took a far darker turn in the last months of the Second World War, when the Hohenzollern family was forced to move out of its home to make way for the fleeing leaders of the French Vichy government.

Marshal Pétain was given quarters in the castle and Sigmaringen's population swelled as French collaborators fled their country and the advancing Allied troops. The 'Sigmaringen enclave', as it was known, lasted from September 1944 until April 1945, when Allied French forces occupied the town.

Nowadays the town is a popular tourist destination for visitors to the Hohenzollern castle and to the Upper Danube Nature Park, with its hiking trails and bike paths.

The tourist information office is just under the castle in the centre of the town. It is open from Monday-Friday year-round and seven days a week in the summer months.
Tourist Office Website: www.sigmaringen.de (German only, some brochures in English)

Sigmaringen castle stands at the centre of the town on a limestone rock spur above the Danube. It has been the seat of the counts and later princes of Hohenzollern-Sigmaringen since 1535.

The imposing building is an impressive example of how a medieval castle developed into a princely residence. Much of what can be seen today dates from later renovations, mostly in the 17th and 19th centuries, although the original outlines of the fortification still served as a base for the architects in later times. 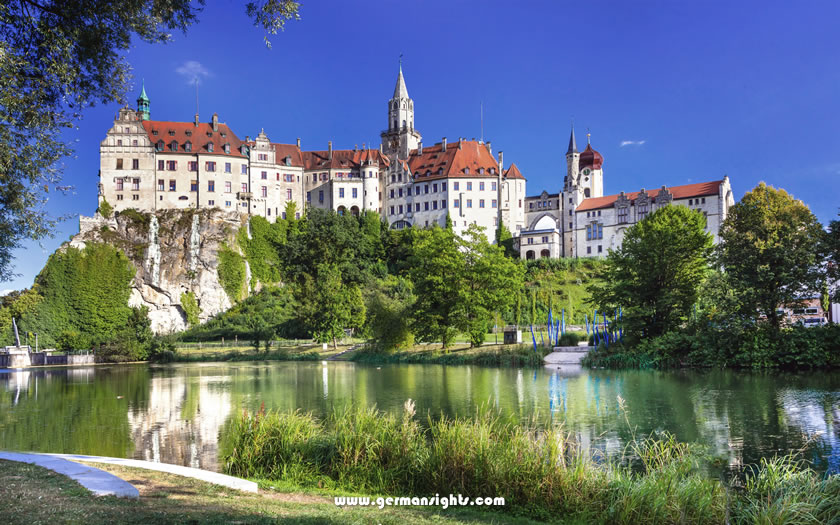 The Hohenzollern castle at Sigmaringen

Visitors can explore the castle on a regular hour-long guided tour of the interior with the precious furniture, porcelains, miniatures, clocks, precious tapestries and paintings. There are several tours each hour available in German, but with pamphlets in other languages. The palace also has one of the largest private collections of weapons in Europe with around 3,000 objects.

Those who enjoy the castle might want to take a rail trip to the other impressive Hohenzollern Castle just outside Hechingen.