Saxon Switzerland (or 'Sächsische Schweiz' as it is known in German) is one of Germany's national parks.

It is located near the border of Saxony with the Czech Republic and Poland and forms the end of a much-loved and -frequented tourist route from Dresden into the sandstone rock formations along the Elbe river.

Over the border, the Czech Republic houses the Bohemian Switzerland National Park and the neighbouring Elbe Sandstone Mountains Conservation Area.

All in all, the total area of the combined protected areas covers more than 700km². 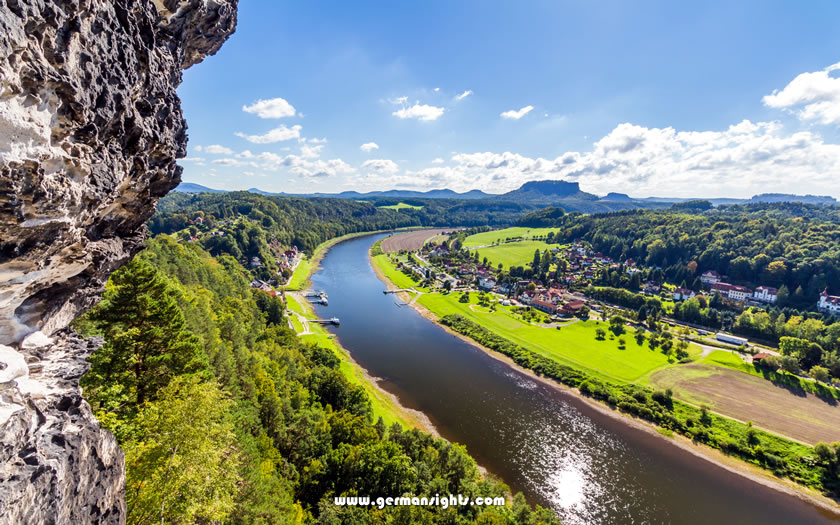 The Elbe River near the Saxon Switzerland National Park

The distinctive rock formations of the Elbe Sandstone Mountains made the area a favourite with artists of the Romantic era in the early 19th century, but before that many of the peaks had been fortified and were used to protect the trade routes running through the region.

Nowadays the Malerweg is a popular hiking trail of six to eight days which links up some of the most popular sights of the sandstone mountains and the views which were popularised in the paintings. It runs from Pirna through to the national park and Bad Schandau before returning along the other bank of the Elbe. The walking tour is signposted with a white square painted on trees and rocks with an 'M' in the middle.

Where is Saxon Switzerland in Germany?

The Saxon Switzerland conservation area is located to the southeast of Dresden along the river Elbe in the state of Saxony.

Where is the Saxon Switzerland National Park in Germany?

The Saxon Switzerland National Park is the part of the Saxon Switzerland conservation area southeast of Dresden in Saxony which is closest to the border with the Czech Republic. The core zone also covers some of the area around the sandstone formations on the northern side of the Elbe between Pirna and Bad Schandau.

How do you get to Saxon Switzerland from Dresden?

The villages along the Elbe river can be reached via the S-Bahn S1 or S2 railway lines or by local bus service from Dresden. Alternatively visitors can take river ferries for a day trip along the Elbe from the city.

The Saxon Switzerland National Park was created in 1990 and covers 93km² of the Elbe sandstone mountains.

Although a fairly recent addition to the list of German national parks, it has been protected in some form or another since the beginning of the 20th century.

It is split into two different sections: the western part covers the famous Bastei Bridge and the Lilienstein while the eastern part is located near the Czech border on the northern side of the Elbe and Bad Schandau. 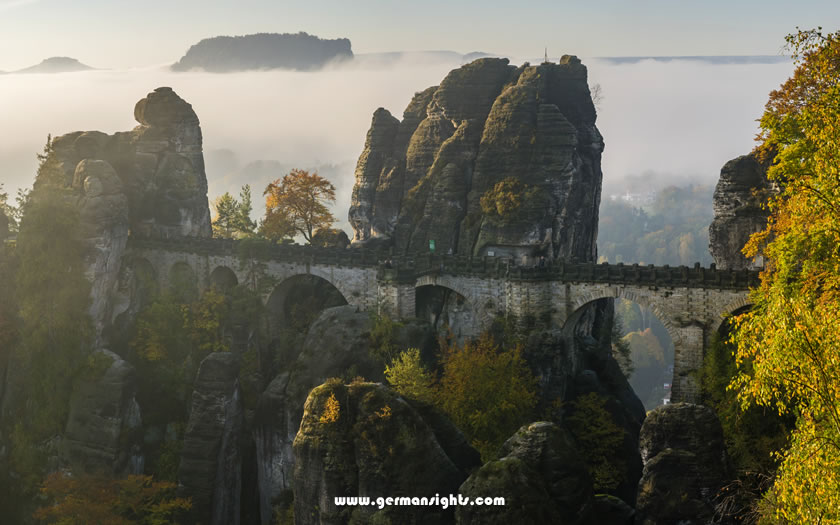 The park is tremendously popular for hiking and rock climbing, although the nature of the sandstone cliffs often leads to closures of hiking trails and routes because of erosion.

The park headquarters is located in Bad Schandau and houses an information centre and exhibition which is open every day in the summer months (closed on Mondays in the winter period).

Towns and Villages along the Elbe River

The main centres for those wanting to spend a night or two in the Saxon Switzerland National Park are Pirna or Bad Schandau, although the smaller settlements offer closer access to some of the main rock formations. 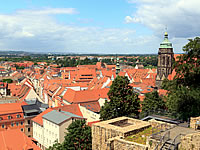 Pirna
Pirna is a decent-sized town of around 30,000 inhabitants which calls itself 'the gateway to Saxon Switzerland'. It has a historic old town and is a good base to explore the area for those who do not fancy staying in the nearby 'big city' of Dresden. It can be reached by the lines regional train lines S1 and S2 from Dresden main railway station. 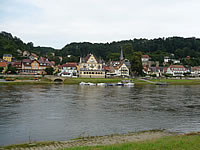 Stadt Wehlen
Wehlen is on the edge of the Saxon Switzerland National Park and a departure point for walking trails and public buses to the famous Bastei rock formations. The village of under 2000 inhabitants can be reached by river ferry and train. The S-Bahn station from Dresden is located on the opposite side of the river with a frequent passenger ferry. 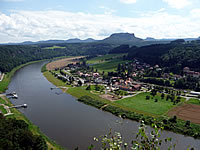 Kurort Rathen
Rathen is the tiny village (population of less than 400) at the base of the Bastei rock. Houses and tourist accommodation are split on both sides of the river. The train station for the S-Bahn services from Dresden is on one side (Oberrathen) while the steep climb up to (or descent from) the Bastei starts on the other bank of the Elbe (in Niederrathen). The two parts of the village are connected by a passenger ferry. 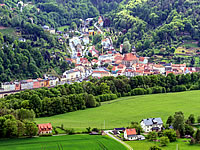 Königstein
Königstein lies at the base of the famous fortress of the same name. Built on a rock plateau the original fortifications date back to the 14th century althoughmost of the current structure is from the 17th and 18th centuries. The fortress is now a museum visited by many thousands of people each year. The small town of Königstein also houses a train station on the regional S-Bahn line. 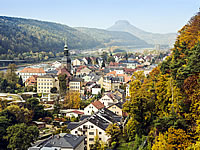 Bad Schandau
Bad Schandau is the last town on the S-Bahn rail line from Dresden and is situated near the Czech border. This spa town of just under 4000 inhabitants also houses the headquarters of the Saxon Switzerland National Park. Among the other sites in the town is an unusual steel elevator in Art Nouveau style which featured in the Hollywood film 'The Grand Budapest Hotel' and an 8km-long tramway which runs to a nearby waterfall.

Getting to the Saxon Switzerland National Park

Those staying in Dresden will find that it is extremely easy to use the public transport system. The S-Bahn regional train service has a line which stops all along the river and where the final stop is close to the Czech border inside the National Park, while there are also public bus services which are included on certain Dresden public transport day passes.

The only transport which is not included is the minimal cost for the passenger ferries to get across the river from the S-Bahn stations to and from, for example, sights such as the Bastei.

Because of the lack of bridges across the Elbe and the general mountainous country terrain it is probably better for car drivers to park up somewhere and then use the rail or bus services.

The alternative way of viewing the area is via a ferry excursion up and down the Elbe River, although this is with the disadvantage that time to leave the ferry and explore different villages is restricted.