Konstanz is the largest and most historic town on Lake Constance and is known for its role in the religious disputes in the Middle Ages.

It is located on the border with Switzerland - the neighbouring town of Kreuzlingen is on just the other side of the customs posts - and lies at the western end of the lake, near the start of the Rhine. 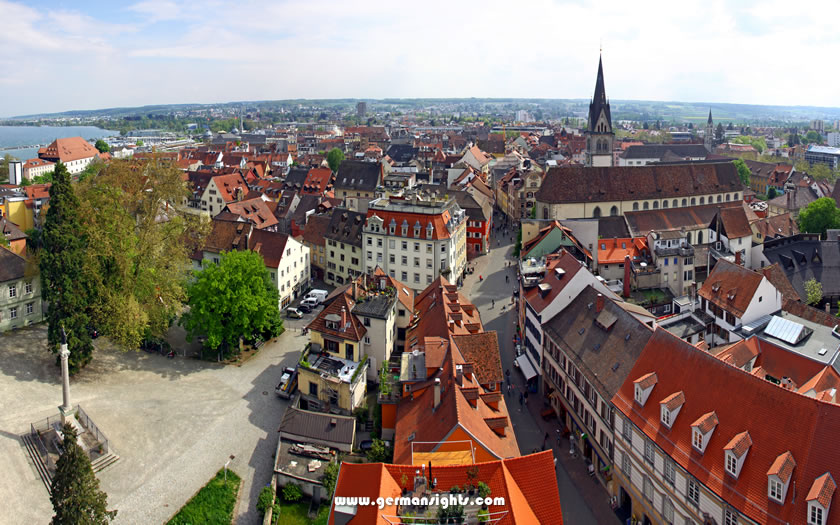 An aerial view of the old town in Konstanz

Konstanz is a busy commercial and university student city as well as being a tourist base for visitors looking to explore Lake Constance and the other lakeside towns such as Meersburg, Lindau, Bregenz and Friedrichshafen.

It can however be difficult to work out the best way of getting there and how to get around the lake. More details about hotel accommodation and travel can be seen on this page:
Konstanz Hotels & Travel

The flower island of Mainau welcomes well over a million guests each year to its gardens and displays. More information about visiting the island can be found here: Mainau Island

Traces of settlers from the later Stone Age have been found around Konstanz, although the earliest permanent habitation is thought to have been by the Celts in the 1st century BC.

The Celts were defeated by the Romans, who built a fortress in the area of the Konstanz Minster in the 1st century AD. The name 'Constantia' is thought to have come from the Roman era, although there is some debate about which Emperor Constantine the town was named for. The first time the name of the town is mentioned in a document was in the 6th century.

With the fall of the Roman Empire, Konstanz came under the control of the various Germanic kingdoms which appeared in the area. 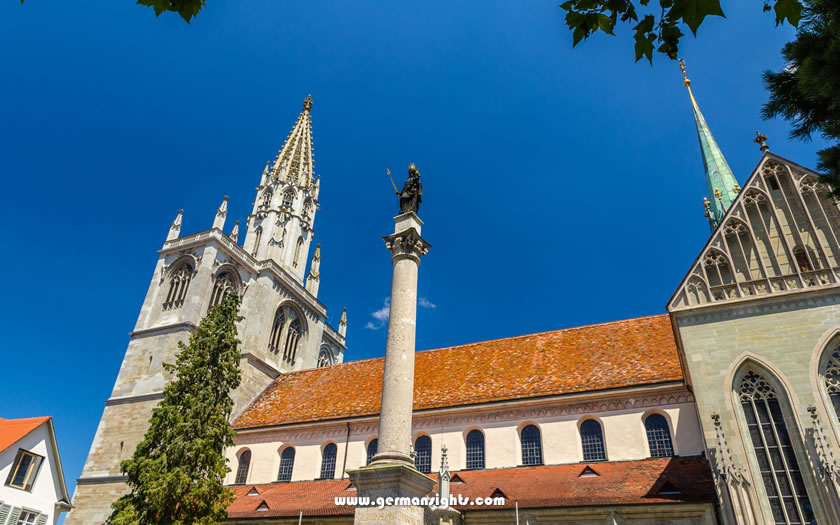 The minster at Konstanz in Germany

Konstanz became a religious centre under the rule of the Bishop of Konstanz and an important strategic point on the trade routes between north and south. It was the location of a major Rhine crossing and became an important base for the linen trade. Konstanz received the right to hold a market at the start of the 10th century.

At that time only the bishop's residence was fortified with the merchants eventually being protected by the expansion of the town walls in the 12th century.

The town won the right to mint its own coins and became an important stopping point for merchants trading in linen, but also furs, herbs and spices.

But even at the point of its most successful commercial performance, Konstanz suffered a body blow as the connection of a trade route over the Gotthard pass meant that the town became irrelevant for merchants looking to transport their wares to Zurich and Basel.

The Council of Konstanz

The Council of Konstanz marked the high point of the town's power and influence. At the time, the church in Europe was bitterly split, with three opposing popes supported by different factions and a reformist group of philosophers and clergy who were undermining the established power structures within the Catholic church.

It took place between 1414 and 1418 and involved more than 400 high-ranking ecclesiastical figures, as well as retinues of various kings and princes, especially King Sigsmund, the Imperial Protector of the Church (later Holy Roman Emperor).

The council resulted in the resignations of the three existing popes, the election of a new pope (Pope Martin V), and the execution by burning at the stake of the church reformers Jan Hus and Hieronymus of Prague. 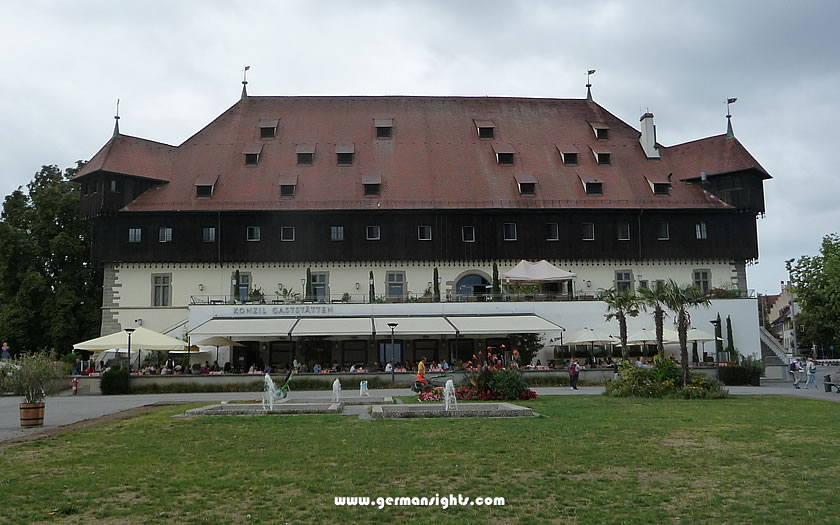 The medieval council hall building at Konstanz in Germany

Konstanz had been chosen because of its position on trade routes, meaning relatively easy access for the important visitors, and the capability to feed the visitors with local fish from the lake as well as other goods which would need to be transported.

At the time, Konstanz had a population of around 6000, so the fluctuating number of visitors had a massive effect. Estimates reckon that there were more than 70,000 people attracted by the council. Apparently, many were forced to sleep two to a bed and commentators from the era remarked on the flourishing trade in the brothels which sprung up around the town.

The most important decision of the four-year Council - the election of a new Pope - took place in the merchants' trading house on the lakeshore, which had been built some decades before to deal with the flourishing commerce between Germany and Italy.

The trading house became known as the Konzil ('council building') and was renovated in 1970. It now houses meeting and seminar facilities and a restaurant.

After the Council of Konstanz

Although the Council of Konstanz was partly notable for the burning at the stake of two renowned campaigners for church reform, Konstanz later became a city which supported the Reformation.. Unfortunately, during the Counter-Reformation, that led to Konstanz having to surrender to hostile forces and becoming part of the Hapsburg provinces in Austria.

By the 17th century Konstanz was a sideshow used by the Austrians to block any efforts at Swiss expansion. The Napoleonic wars brought even more hardship, with the city being occupied by French revolutionary troops and then by Napoleon during his various campaigns against Austria.

However this did mean that the city came under the control of the German state of Baden, later to become part of Baden-Württemberg.

Although Konstanz was an important industrial centre, involved in weapons production and radar components research, it remained untouched by the Allied bombing raids which destroyed so many other German population centres.

The reason was the Swiss border with the neighbouring town of Kreuzlingen, which runs through the centre of the city, and the fact that in contrast to other German cities, Konstanz left its lights on at night to mask the border with Switzerland.

Konstanz tourist information office is situated in the same building as the main railway station near the city centre opposite the northern edge of the old town. It is open seven days a week in the summer (with slightly restricted hours at the weekend) and open on weekdays only during the winter.
Website: www.konstanz-tourismus.de