Oberammergau is a sizeable and attractive village of around 5,000 inhabitants in the Bavarian Alps where the tourist numbers go mad every ten years when the local Passion Play rolls around.

It is also famous for its woodcarving and for the painted houses decorated with frescoes. It housed an American army installation for a while, and presently is home to a NATO training centre, which has increased the popularity of the village.

It is also one of the stops on the German Alpine Road tourist route and makes a good centre for a short breather if taking a leisurely approach to the drive. 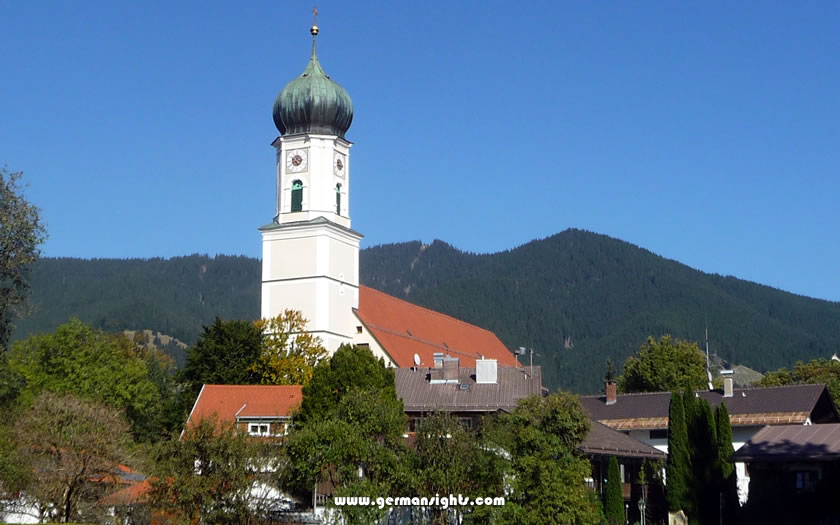 The parish church in Oberammergau

Oberammergau has a good range of hotel and guesthouse accommodation - it has to in order to deal with the tour groups that flock to the Passion Play. More about the choice and about how to get there are on our travel page:
Oberammergau Hotels & Travel

Oberammergau may be the administrative centre of the area these days, but in times gone by the religious settlements in Unterammergau and Ettal were more important.

The area was settled by the Celts and there is evidence of battles between them and the Roman legions passing through southern Germany.

The first settlement, in Unterammergau, was from a Count Ethiko who founded a cloister. 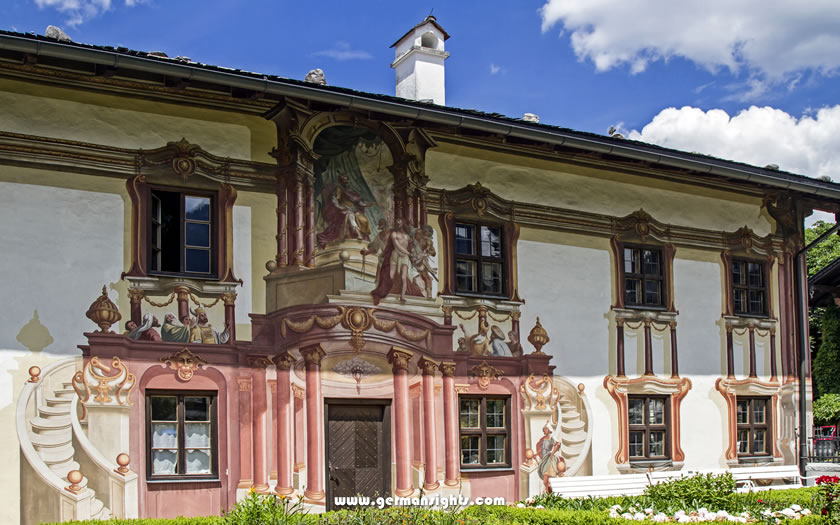 The Pilatus House in Oberammergau with its fresco paintings

A small farming community established itself in the area and, with the foundation of Ettal Abbey in the 14th century and the increase in trade from north and south, found a source of income apart from the forestry and tough mountain agriculture.

Porters from the Bavarian village, known as 'Kraxenträger', transported goods along the trade route through southern Germany and into Austria but also helped the local industry by carrying the woodcarvings produced from the area. Some of them were religious in nature, such as crucifixes, but the carvers also diversified into children's toys and other decorations.

The village and the trade route was badly affected by the wars of the Middle Ages in central Europe and by bouts of the plague (which led to the establishment of the Passion Play, described in more detail lower down this page).

Eventually the influence of the local religious establishments on the village lessened with the secularisation undertaken in Bavaria in Napoleonic times and the forerunners of the current administrative structure were put into place.

The village was connected to the rail network at the beginning of the 20th century and this helped increase the numbers of visitors to the village (although already in the 19th century more than 100,000 spectators were coming to watch the Passion Play each decade).

Oberammergau was used as a base for alpine troops and, following the Second World War, as a US Army base. Tourism has continued to be extremely important for the village, with its history, the Passion Play and the wood- and wax-carving and distinctive frescoes on the houses, although nowadays outdoor activities such as hiking and skiing in the Ammergau Alps are becoming as important as the bus tour groups.

Although there are equivalents in other villages and other countries, the Oberammergau Passion Play is by far and away the most famous passion play.

The 2010 play saw more than half a million visitors to the small town during the summer season of performances and brought in, according to the local press, more than 25 million Euros to the region. 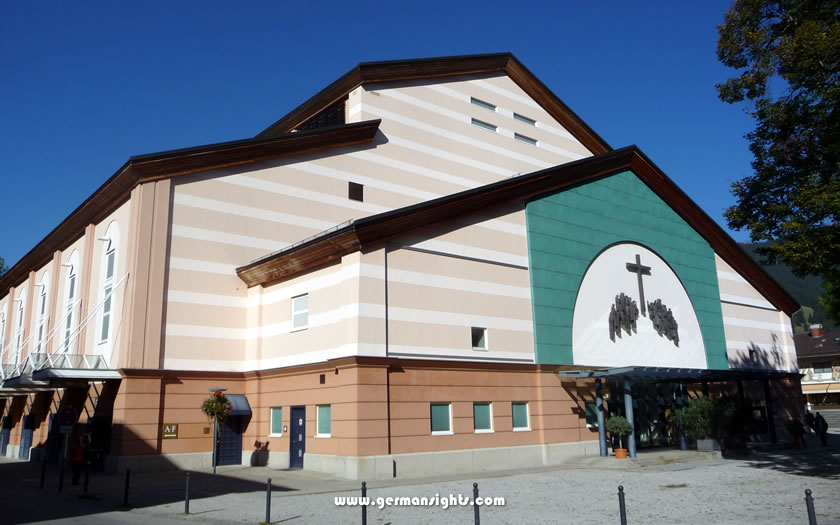 The Passion Play theatre in Oberammergau

The history of the Passion Play is well-known: essentially a worker in the village broke a quarantine in the 17th century to go and see his nearby family and brought the plague back to Oberammergau. After more than 80 inhabitants had died, the community swore to re-enact end of Jesus's life every ten years and, from that point, no others died.

At the time this was not an uncommon pledge - records show that there were hundreds of passion plays being held in those days. The first Oberammergau play was held in 1634 in the graveyard where the plague victims had been buried.

By the end of the 17th century the play had moved to the 10 yearly cycle on the start of the decade. Occasionally there have been special plays put on outside these years. For example, after the final defeat of Napoleon (who had secularised many of the religious establishments in Bavaria) the play was held in 1815.

The play has been controversial through the 20th century, with the original text being accused of anti-Semitism and various different versions having been performed according to the prejudices of the time. In 2000, in what was described as a 'new generation' of actors and performances, the text was almost completely rewritten to address the concerns and to modernise the interpretation of the main roles.

The characters are still played by inhabitants of the Bavarian town (almost half the population are involved) and there is much interest and no little controversy about the choice for the main roles. For example, there were complaints when a married mother was chosen to play Mary for the first time in 1990.

Men who appear in the play have to start growing beards the year beforehand on Ash Wednesday and rehearsals commence in the autumn of that year after the choice of actors for the roles has been announced.
Website: www.passionsspiele-oberammergau.de

The Passion Play theatre can be visited outside the play years and nowadays is also used for other musical performances. It is possible to buy a combined ticket for entrance into the Oberammergau Town Museum (which covers local history), Pilate's House (with displays by local craftspeople and a collection of painted glass) and the Passion Play Theatre (with an exhibition of the history of the play).
Website: www.passionstheater.de

The Passion Play theatre and village of Oberammergau are also popular spots on day tours from places like Munich, with the location often being combined with the fairytale castles of 'Mad King Ludwig' of Bavaria. The impressive Linderhof Castle is only a few kilometres away from the village, and Ettal Abbey can be visited on the route back to Munich or Garmisch-Partenkirchen.

The tourist office in Oberammergau is located just outside the central area near a coach and car park. It is open weekdays and on Saturday mornings.
Website: www.ammergauer-alpen.de