Kloster Andechs is one of the most famous monasteries in Bavaria - not only because of its history and lovely location on a hill above the Ammersee but also because of the food and drink served there.

Andechs monastery is renowned for its brewery - and especially its dark double bock beer - and is well-known for the roast pork knuckles served in the brewery restaurant that many reckon are the best to be found in Bavaria.

Easy access from Munich makes it a popular day trip even for those who are not seeking culinary delights. 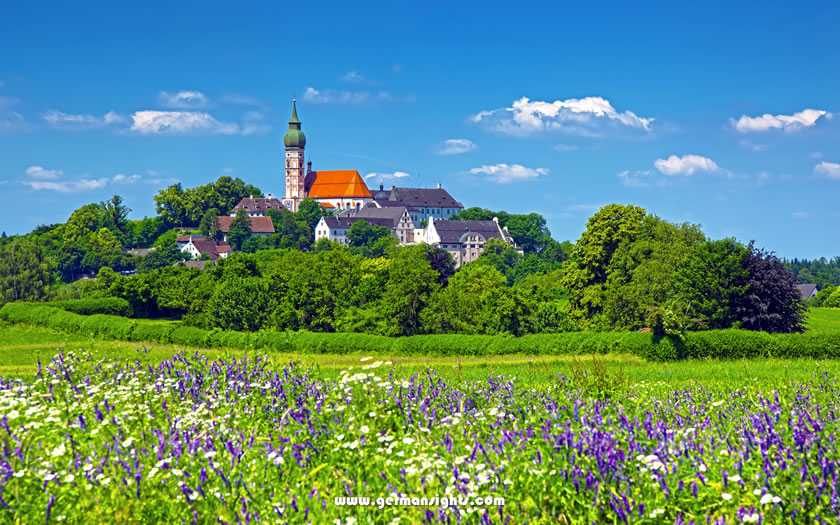 Kloster Andechs near the Ammersee lake

The location where Andechs monastery now stands was originally a residence for the local ruling family. The strategic position, overlooking the Ammersee, where Andechs stands was chosen as their home by the Counts of Dießen, a settlement on the lake shore back in the 12th century.

The family changed their title to the Counts of Andechs and became an influential power in the Holy Roman Empire. One daughter was later canonised as a saint (St Hedwig) and was married to the King of Poland.

The rise of Andechs led to conspiracies from competitors and the family was virtually destroyed by the rival Wittelsbachs, losing most of their holdings in the 13th century and dying out with the lack of a male heir.

The Wittelsbachs destroyed the castle on Andechs hill and, it was thought, the relics which had made the location a place of pilgrimage.

However, these were 'rediscovered' in the 14th century and the hill became known as the 'Holy Mountain'. In the 15th century the monastery was founded under the stewardship of the Benedictine monks of the religious centre at Tegernsee.

The monastery survived through the travails of the Reformation, the Black Death and the Thirty Years' War but was burned to the ground following a lightning strike. It was rebuilt once again and much of what it is possible to view today was created as part of the 300th anniversary celebrations in 1755. The rococo decorations of the interiors, for example, date from this period, as does the distinctive bell tower which can be seen from around the Ammersee.

The monastery was forced to close in the period of secularisation in the Napoleonic era and the monks left the Holy Mountain. In 1846 Ludwig I, the Emperor of Bavaria, bought the site and bequeathed it to the Benedictine monks of St Boniface in Munich, who still run it to this day.

In 1929 Andechs received the skull of St Hedwig as another relic and, after the Second World War, pilgrimages to see the Holy Mountain increased as exiled Silesians traveled to see remains of their patron saint that remained accessible to them.

Kloster Andechs is one of the only remaining breweries in Bavaria which is independently operated by a monastic order. The beer that is brewed there is renowned amongst enthusiasts with the dark double bock style receiving high ratings on beer-tasting websites.

Originally monks brewed the beer for their own consumption and that of visitors and pilgrims. The Benedictine order especially has the concept of hospitality as part of their credo. Apparently there were three strengths of beer which were brewed: the weakest for the guests, then the normal strength for the monks, and the stronger version for the higher-ranking members of the Kloster Andechs community. 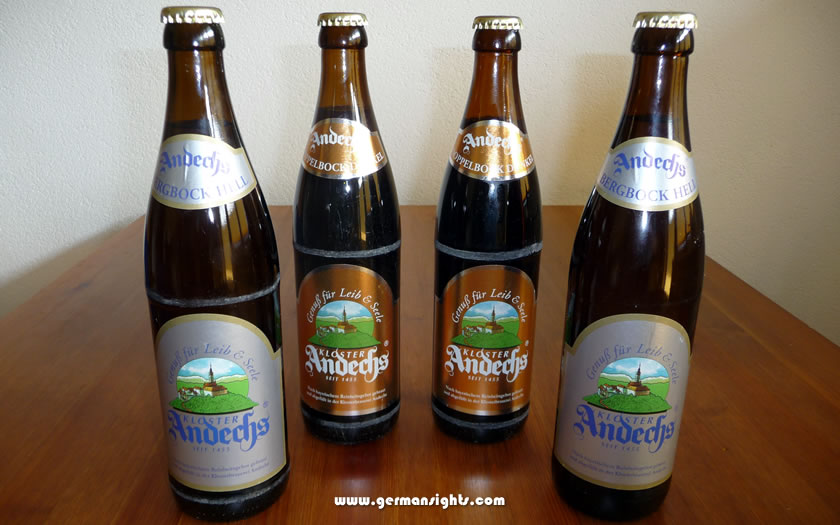 Beer from Andechs monastery near the Ammersee

The brewery also offers seasonal strong beers, such as the winter beer, which are only available on draught from the Bräustuberl at the monastery. Around 5% of the total production is consumed on site at the Bräustuberl or at the nearby Klostergasthof restaurant.

The Bräustuberl rooms and terrace are also well-known for their local culinary specialities. The Benedictine rules of hospitality mean that anyone can arrive, sit at a table and eat their own food.

But many visitors take advantage of the extremely hearty meat dishes on offer from the kitchens in the self-service area. Roast pork knuckles and pork belly are favourites alongside cold cuts and cheeses from the monastery's own production.

It should be noted that the very popular pork knuckles are only served whole and that single visitors should be prepared to leave a good portion or to take it away with them. 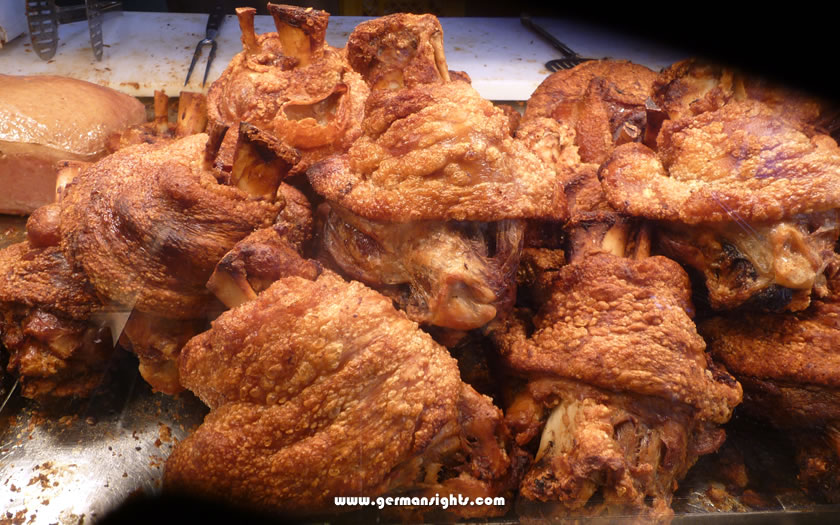 Roast pork knuckle from the Bräustuberl at Andechs monastery

Those who would like waiter service and something a little bit more refined than self-service, beer and meat can try the Klostergasthof a little way down the hill to the monastery.

Getting to Andechs Monastery

Andechs is close enough to Munich to be a popular day trip from the Bavarian capital. The S-Bahn regional train service runs to the town of Herrsching on the eastern shore of the Ammersee. From there it is possible either to catch a bus to the monastery or to hike through the Kiental valley up to the complex (around 4km).

Those driving to Andechs monastery from Munich will probably take the motorway south to the Starnberg exit and then via the northern end of the Starnberger See up into the Andechs area. Driving from the south, the easiest route is probably via Weilheim.

Map of the Andechs Area Accommodation