Ravensburg is a town of 50,000 inhabitants in the southeastern region of Baden-Württemberg just to the north of Lake Constance.

It was once a Free Imperial City back in the days of the Holy Roman Empire and was a major trading centre in the Middle Ages.

Nowadays it is also famous in another field - with the Ravensburger games company (renowned for its jigsaw puzzles) being named after and headquartered in the town. 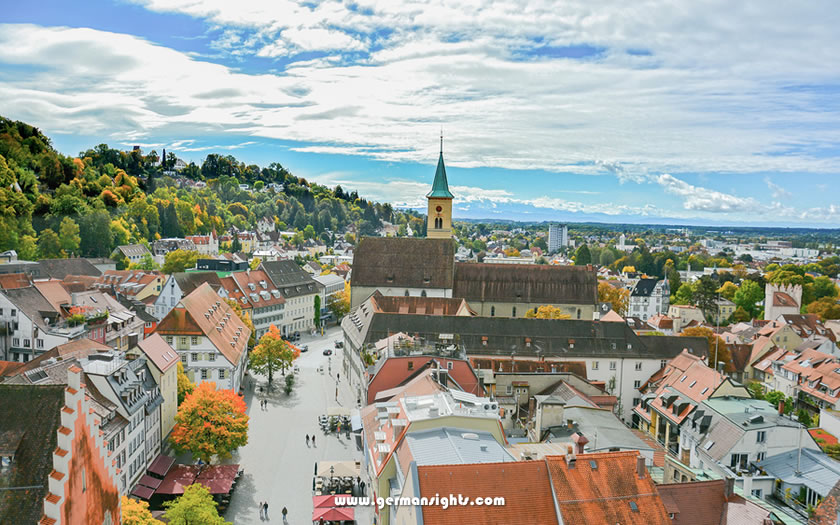 View over Ravensburg in southern Germany

Details of how to get to Ravensburg and a selection of accommodation can be seen on our travel page: Ravensburg Hotels & Travel

The Ravensburg region was, according to archaeological finds, settled in the Stone Age and in Roman times.

But the first written record of it as a town was a settlement which grew at the base of the massive fortification on the nearby hill (now known as the Veitsburg).

The town developed a certain degree of independence - becoming a Free Imperial City - while the fortifications remained in the hands of imperial authorities. 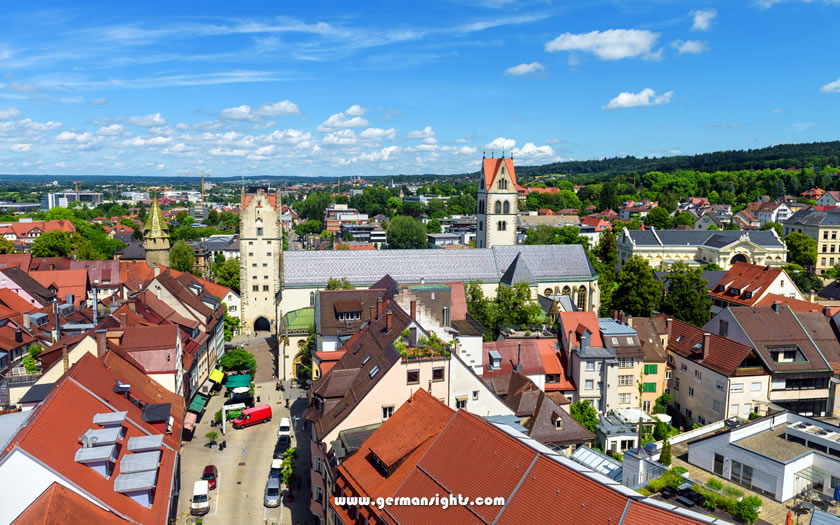 An aerial view of Ravensburg

This later led to the building of the most imposing tower in Ravensburg, the cylindrical white Mehlsack ('flour sack') so that the inhabitants could keep an eye on the goings-on on the hill.

Before that, however, Ravensburg had flourished as a trading location. Merchants imported spices, metal ores and wine from different parts of the known world from the 15th century onwards and exported cloth and paper. The "Grosse Ravensburger Handelsgesellschaft", formed from merchants in the Lake Constance area, became one of the most important commercial organisations in Europe.

Even when the riches from the trade routes started to diminish, as new ones were opened up via towns such as Augsburg, the paper production remained important through to the 19th century.

Ravensburg was not spared from the religious strife of the Reformation and Counter-Reformation but did became one of the towns in southwestern Germany with guaranteed religious equality in the 17th century.

Ravensburg lost its position as a Free Imperial Town in the Napoleonic wars at the beginning of the 19th century and became first part of Bavaria and then taken over by the Kingdom of Württemberg.

Industrialisation and the building of rail links first to Friedrichshafen and later to Ulm in the mid-19th century helped with the expansion of the town. Most of the industry was light engineering and textile production but was never bombed in the Second World War and was surrendered to the French forces with no damage to the old town.

The Towers of Ravensburg

Most of the historic towers and town wall surrounding the city centre of Ravensburg date from the 14th and 15th century.

The original town fortifications stretched only to the present-day Marienplatz but as the settlement became more prosperous and attracted more inhabitants the defensive walls were extended outwards to the structures that can be seen today.

The oldest of them is the Obertor and the tallest, at 51m in height, is the neighbouring Mehlsack, both of them located on the southeastern edge of the old town. 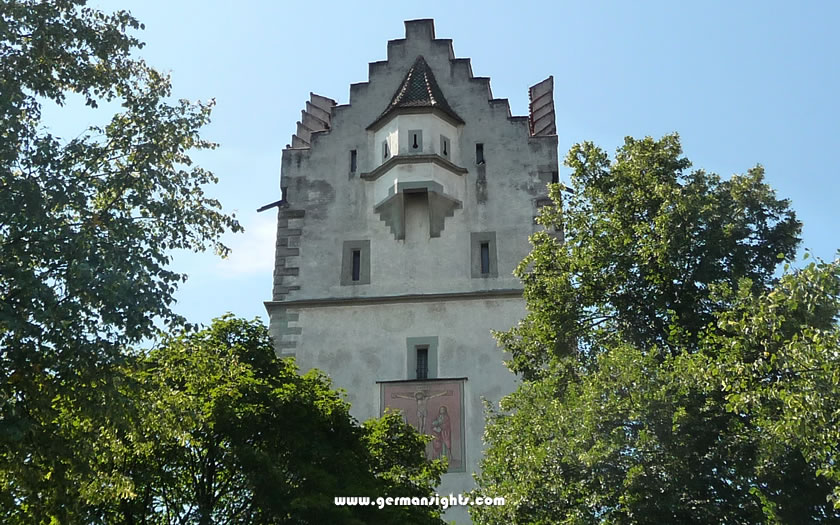 The Blaserturm, almost as high as the Mehlsack, stands on its own in the city centre. It used to be part of the old walls before the town expansion. The 212 steps to the lookout point can be climbed in the summer months. The Mehlsack can be climbed in August and September on the weekend.

Those who are into their jigsaw puzzles might well be already familiar with the blue triangle which is the trademark of Ravensburger AG, one of the leading puzzle and game publishers in the world.

The company was started, as the name suggests, here in Ravensburg in the late 19th century by the son of a book publisher.

Originally the company published instruction manuals for handicrafts enthusiasts but branched out into board games. The first board game, 'Journey Around The World', was brought out in 1884. 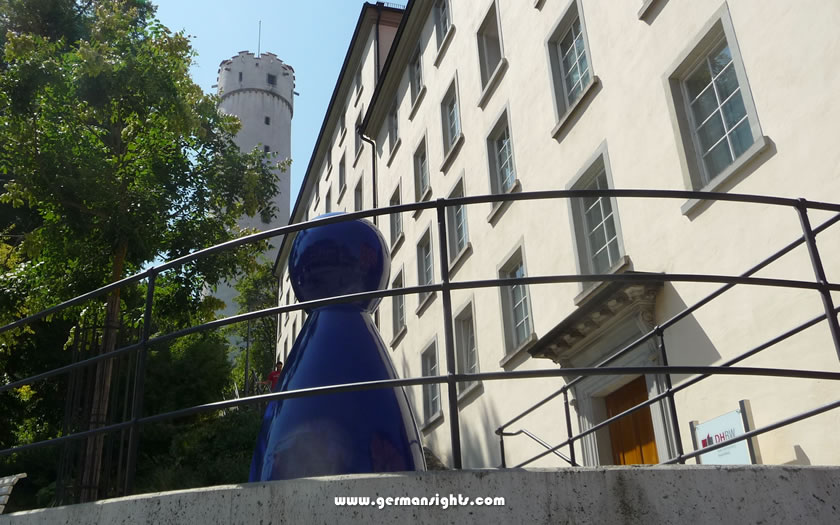 The Blue Game Piece in Ravensburg

The company later specialised in children's books and games and expanded into other European countries in the 20th century. The first jigsaw puzzle was introduced in the 1960s.

The company runs a museum in the centre of the town as well as a children's fun park near Lake Constance. The Ravensburger Museum is part of the Museum Quarter, which also includes the Local History Museum, the Art Museum, and the Business Museum.

The Ravensburg Tourist Office is located in the central Marienplatz square. It is open all day from Monday to Friday and until the early afternoon on Saturdays.
Website: www.ravensburg.de