Eisenach is a pleasant small town in Thuringia with connections to some very famous people.

It is one of the locations where Martin Luther spent his formative years and can also boast of being the birthplace of composer Johann Sebastian Bach. 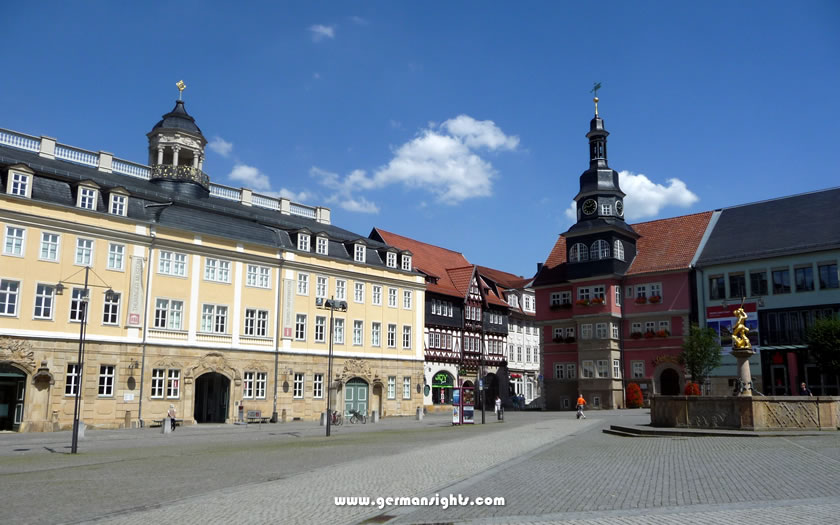 The market square in Eisenach, Germany

Eisenach is located to the west of Erfurt. Ways of getting there and accommodation options on arrival are available on the following page:
Eisenach Hotels & Travel

Eisenach is also called the "Wartburg town" and its history is closely linked to this UNESCO-listed German fortification. The Wartburg was built by the rulers of Thuringia in the 11th century before any major settlement in the area.

The original village nearby, settled by the Franks, was at the foot of the Petersberg to the east of the present town.

The church of St George in the market square of Eisenach

Eisenach is first mentioned in the next century as an administrative region combining three markets. Trade was an important source of growth and income, as Eisenach lay on the Via Regia east-west trade route.

The Wartburg became the seat of the rulers of Thuringia and Eisenach, as the local town, became even more prestigious. The fortified city walls were built around this time.

In the Middle Ages, Eisenach was heavily involved in the Reformation and the subsequent wars between opposing beliefs. As a strategic point on the trade routes and a military 'bottleneck' it was also a particularly prized possession.

It actually became capital of its own dukedom in the 16th century, when the small duchy of Saxe-Eisenach was created during the inheritance problems of the ruling family. (This was later combined into Saxe-Weimar and later into the state of Thuringia.)

The town was invaded by French troops in the Napoleonic wars (some of the most important battles took place nearby at Jena and Leipzig) and during their retreat a massive explosion destroyed many buildings in the town.

Following the Napoleonic era, the concept and the demand for German unification became stronger and one of the first important meetings was held by the student fraternities at the Wartburg. (The Burschenschaftsdenkmal monument above the town commemorates this original festival.)

The town benefited from industries settling in the area - workshops produced textiles and, at the end of the 19th century, the country's first car plant was opened and started to produce the 'Wartburg' - the forerunner of the famous East German car.

Eisenach was bombed heavily at the end of the Second World War and occupied by American troops. However following the treaty at the end of the war, the town became part of the Russian-occupied zone and later part of East Germany (with the border running only a few miles away from the town).

The connections with Bach and Luther, as well as the historic significance of the Wartburg (now listed as a World Heritage site by UNESCO) and the proximity of the popular Rennsteig walking route through the Thuringian forest, have meant a big upswing in tourism for the area.

The tourist office is located in the main Markt square and is open 7 days a week, with slightly shorter opening times at weekends and holidays:
Website: www.eisenach.info

Martin Luther has a close connection to Eisenach, having lived in what he described as the 'beloved town' during his childhood and again when he was forced to hide during the turbulent years of the Reformation.

The Lutherhaus in Eisenach is a old timbered artisan's house where Luther is supposed to have lived from 1498 to 1501. The dwelling was owned by the Cottas, an influential and religious family in the town.

Luther left Eisenach to study at the nearby university in Erfurt. 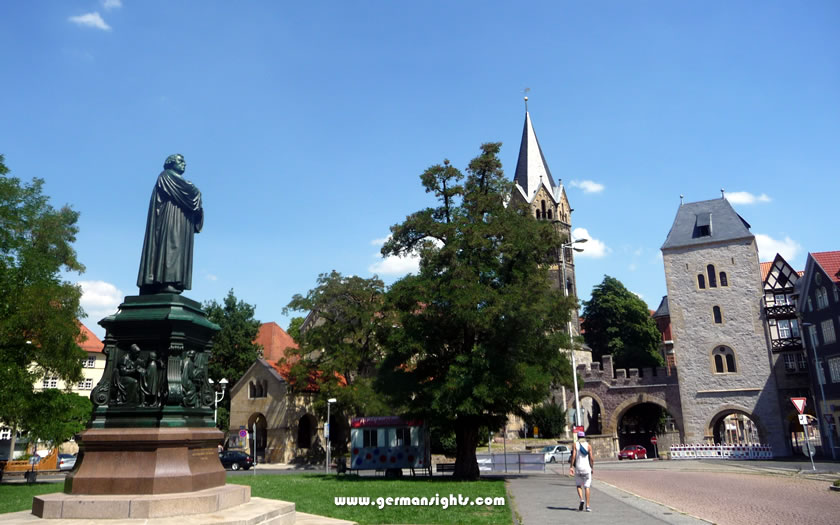 The Lutherhaus, located just off the Markt square in the centre of the town, has now been restored and is home to the permanent exhibition 'Luther and the Bible'.
Website: www.lutherhaus-eisenach.com

Luther's second stay in Eisenach came after he had refused to repudiate his writings on the Reformation in front of the Imperial Diet. He was taken into protective custody by sympathisers and hidden in rooms in the Wartburg fortifications.

During his time there, he translated a Greek copy of the New Testament into German. Because there was at the time no standard 'German' language, he used the Saxon diplomatic language (which was familiar to other nations) but was forced to invent words for which he found no equivalent expression.

The first New Testament in German was printed in 1522 following his return to Wittenberg. The Old Testament followed 12 years later.

Composer Johann Sebastian Bach was born in Eisenach in 1685. His father was the musical director of the town pipers and generations of the family had a close connection to the town.

Bach stayed in Eisenach until he was nearly ten years old. He learned to play different instruments from his relatives and sang in the school choir.

His mother and father both died in the same year and Bach then moved to Ohrdruf, a town to the southeast of Eisenach, to live with one of his brothers. 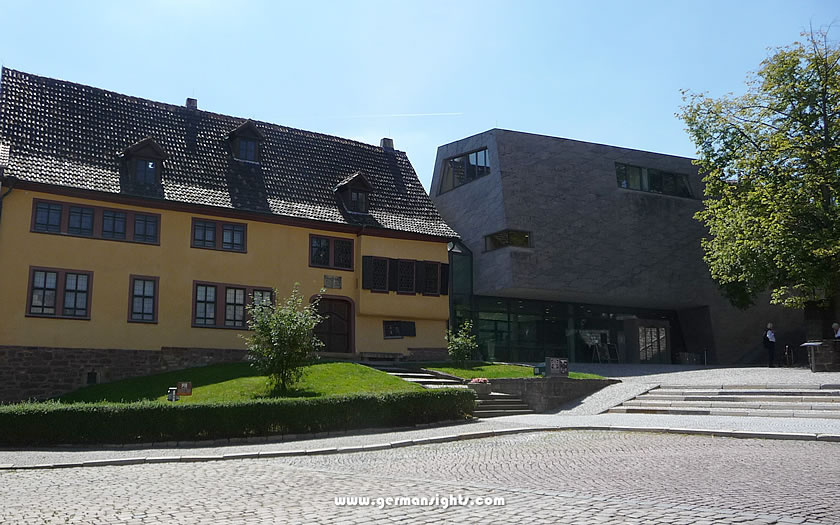 The Bach museum in Eisenach

Eisenach now houses the Bach Museum in one of the oldest houses in the town, known as the Bachhaus.

Originally the Bachhaus was thought to be the family residence where Bach spent his early years. Although this identification led to the Bach Museum being installed on the premises at the start of the 20th century, a search of town records decades later showed that Bach's father actually owned another house in a different nearby location.

A more modern section of the museum was built as an extension to the original historic house and houses multimedia exhibits.
Website: www.bachhaus.de