Wittenberg is a town of 50,000 inhabitants in Saxony Anhalt that is renowned for its role at the heart of the Protestant Reformation at the start of the 16th century.

Since 1922 the town has been known as 'Lutherstadt Wittenberg' - it was here that Martin Luther took the famous stand of nailing his '95 theses' to the church door.

Sites related to Luther and to his colleague Philip Melanchthon are listed, along with those in nearby Eisleben, as part of the UNESCO World Heritage site. 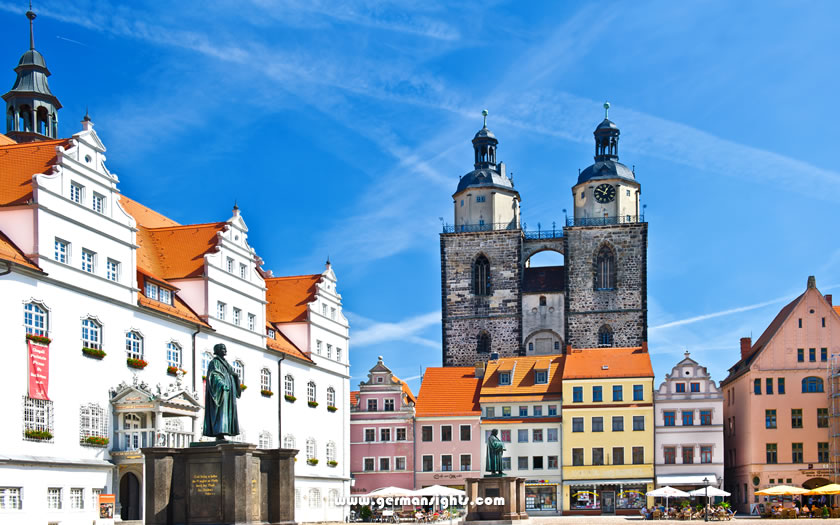 The market square in Wittenberg

Wittenberg is a major destination for package tours based around the history of Protestant Reformation and the town offers hotel and other types of accommodation to cater for those visitors. More details can be seen on our travel page:
Wittenberg Hotels & Travel

While Wittenberg is best-known for being one of the centres for the Protestant Reformation, it does have a history both before and after those events.

It was once the residence of the rulers of the region - the Dukes of Saxe-Wittenberg - and was later renowned for its university, which was so well-known in those days that it was the location for Hamlet's studies in the Shakespeare play.

Its position on the Elbe River also made it an important location for tradesmen and markets. 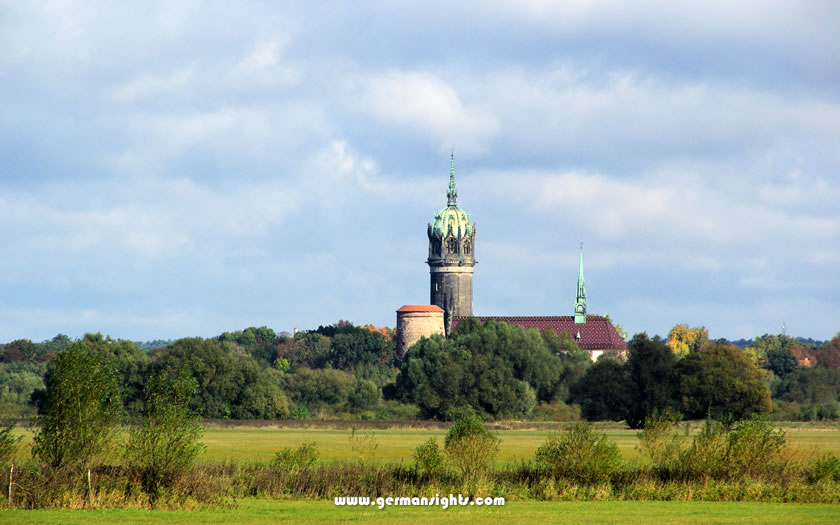 The first use of the name Wittenberg is towards the end of the 12th century, although archaeological sites prove that the area had been settled thousands of years before.

Within a century the town had become the residence of the Saxe-Wittenberg ruling family, one of the many squabbling small states in this part of Germany created by inheritance and dynastic arguments. The settlement also obtained its town charter and around 50 years later the right to hold a market.

The statelet also became the Electorate of Saxony (also sometimes termed Upper Saxony) with Wittenberg as its capital. Electorate meant that the rulers of the town had a vote in the election of a Holy Roman Emperor, a very prestigious position in the Middle Ages.

The original ruling family died out and the Electorate passed into the hands of the Wettin dynasty, who controlled much of what is now Saxony, Saxony-Anhalt and Thuringia.

It was members of this family who started the contruction of the Wittenberg castle as their residence and the castle church of All Saints, which became famous through the later actions of Martin Luther. They also founded the University of Wittenberg for the study of law, theology and medicine, later also to feature heavily in the history of Protestantism.

Since the 1920s Wittenberg's official title has been 'Lutherstadt Wittenberg' - literally 'Luther Town'.

Not only did Martin Luther spend much of his life here, but his actions in the town against the traditional church were central to the growth of the Reformation and Lutheranism.

Luther came to Wittenberg near the start of the 16th century and took up a position in the theology faculty, a faculty he later chaired.

His first and major action during his time in Wittenberg was to write the document that became known as 'the 95 Theses'. 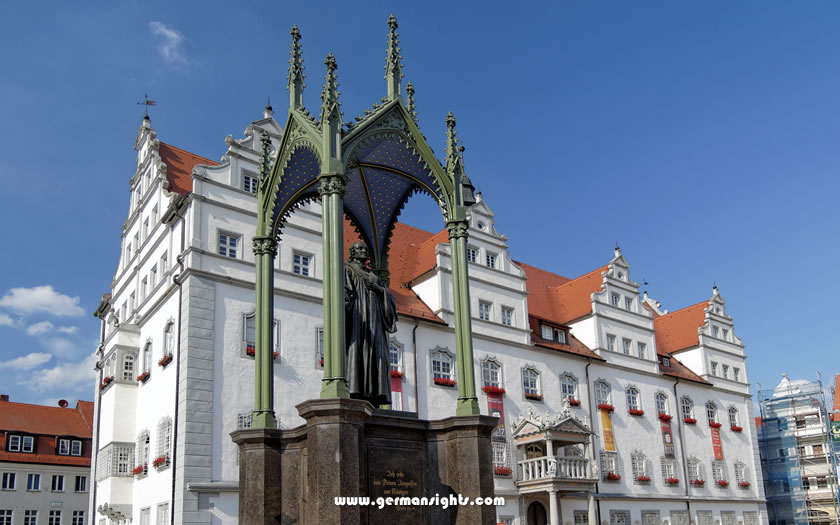 The Luther memorial statue in front of Wittenberg town hall

At that time, the church was trying to raise money for rebuilding St Peter's Basilica in Rome. One of the ways that they attempted to do this was by selling what were called 'indulgences'. Essentially, what you could do was buy (in the form of a donation to the church) forgiveness for sins that you may have committed.

Martin Luther wrote to his superior, the Bishop of Mainz, protesting against this practice. Allegedly, he nailed a copy of his arguments against the sale of indulgences to the doors of the castle church in Wittenberg although some current historians believe that this action never took place. (The church door visitors see now are replicas from the 19th century - the originals were burned during fighting during the Seven Years' War.)

But it was not until the 95 Theses were translated into German that the protests which would result in the Lutheran Reformation really took off. Luther himself became a tremendously popular preacher who drew large crowds from around Europe. As his personal popularity and support for his beliefs grew, he became a threat to the established church who sent him orders to recant his teachings or face excommunication.

Luther's response was to burn the letter along with other religious writings that he disapproved of on what is now the site of the 'Luther Oak' in Wittenberg. He was promptly excommunicated and went into hiding at Wartburg Castle in Thuringia disguised as a young nobleman ('Junker Jörg').

After his exile in hiding, Luther emerged in Wittenberg once again to become a moderate force in the Reformation where more radical believers were pushing even further against the religious and social structures at the time. He rejected the violent attempts to overthrow the 'natural order' of society which resulted in the Peasants' War and the defeat of the radicals.

Martin Luther preached in the Church of St Mary (the 'town church' as opposed to the 'castle church') in Wittenberg and held the first mass in German there. Luther's marriage to Katharina von Bora, a former nun who he had helped escape from a convent, was also celebrated in the church.

He lived in Wittenberg in the former 'Black Monastery', now known as the Luther House and where there is a Luther Museum with exhibits and some of the rooms that Luther used to spread his teachings.

Martin Luther died in nearby Eisleben where he had been born but his body was returned to Wittenberg and he was buried in the Castle Church.

Martin Luther was not the only important Protestant to have lived in Wittenberg. Another theologian, Philip Melanchthon (born as Philipp Schwartzerdt), was a principal collaborator of Luther's and the two are considered to be the founding fathers of Protestantism. His former house can also be visited and his tomb is also in the Castle Church.

Although it remained the centre of the German Reformation, Wittenberg suffered in the religious wars that followed by losing its status as the residence of the rulers of the area.

Like many cities in the area it was also hit by bouts of the plague and by subsequent wars - the Seven Years' War was when much of the old City Castle and Church were destroyed.

In Napoleonic times it was occupied by the French and was again damaged badly, this time by the Prussian Army, who took control of the city after the defeat of Napoleon.

It became a garrison town and, later, an industrial centre. From the 19th century onwards, its status as a memorial to the events of the German Reformation began to be recognised and nowadays tourism is a main factor in the economy of the town.

The Luther Decade started in 2008 and reached its culmination in 2017 - the 500th anniversary of the year that Martin Luther posted the 95 Theses on the church door.

The Wittenberg tourist office is situated near the Schlosskirche at the opposite end of the old town to the main train station. The tourist office is open seven days a week with shorter opening hours at the weekend.
Website: www.lutherstadt-wittenberg.de