Berchtesgaden is one of Germany's most famous mountain resorts - the spectacular alpine setting means that one of the country's national parks is located just to the south of the town.

Berchtesgaden is also the location of the Eagle's Nest - the mountain retreat on the Kehlstein that was built for Adolf Hitler and which has proved a magnet for visitors since the end of the Second World War.

And it is the final stage on the German Alpine Road tourist route - at least if driving the more popular west-east route. 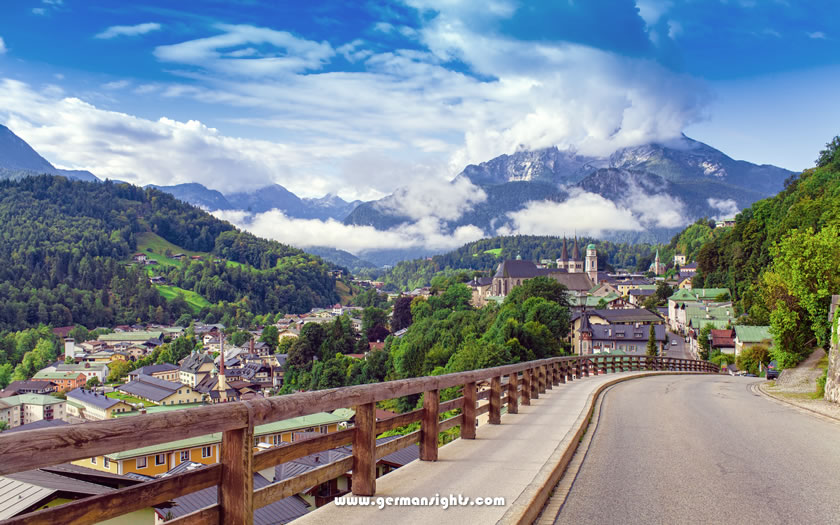 View over the famous mountain resort of Berchtesgaden in southern Germany

There is a wide range of Berchtesgaden accommodation, especially in the hotel sector, with the town having been a tourist destination for many years. More details about what is available and how to get to the town from nearby cities such as Munich and Salzburg can be seen on our travel page:
Berchtesgaden Hotels & Travel

Berchtesgaden is thought to have been settled in the Stone Age, according to the latest archaeological finds.

But as with so many other alpine towns and villages, the first settlement came with the establishment of a religious centre.

In this case, it was the Augustine provostry of Berchtesgaden, founded in the 12th century and raised to the status of an Imperial Abbey by the end of the century. 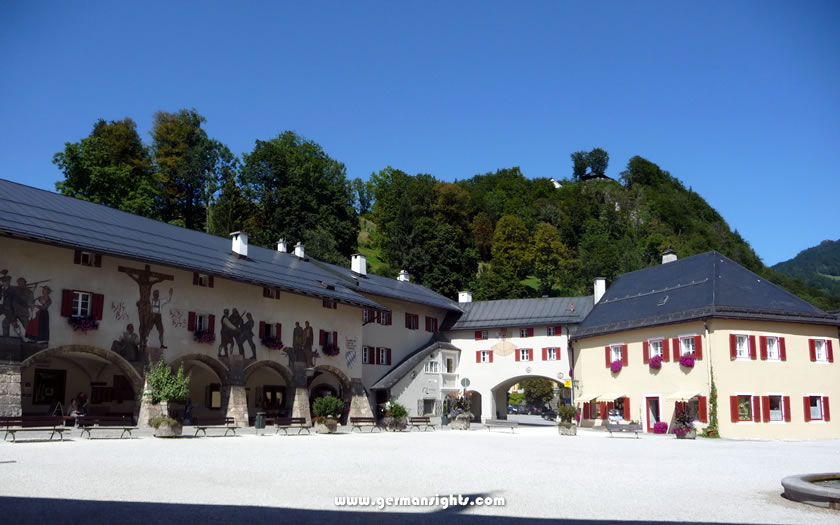 The courtyard of the royal palace in Berchtesgaden

A provost was a mixture of religious and secular titles, a little bit like the prince-bishops who ruled nearby Salzburg (but not as important). The leaders of the Berchtesgaden provostry - the prince provosts - had a vote in the assembly of the Holy Roman Empire.

The wealth from forestry and from the local salt mines led to a rapid expansion of the town and it was given rights to hold a market - an important step in the Middle Ages where a market guaranteed correct weights and measures and often its own legal tender.

The religious-secular mini-state lasted through to the Napoleonic era, when it changed hands a number of times before eventually ending up as part of Bavaria.

Berchtesgaden quickly became a favourite summer residence for the Bavarian rulers - and thus for a wider public - partly because of the hunting opportunities in the surrounding forests and partly because of the unspoilt mountain landscape. The small town attracted artists and writers and tourism boomed. The first guesthouse was opened in 1877 and Berchtesgaden was connected to the rail network with its own train station a few years later.

The Eagle's Nest and Berchtesgaden

The Eagle's Nest (or, as it is known in German, the Kehlsteinhaus) is one of the main attractions for visitors in the Berchtesgaden area.

Although memories of the Second World War may be ebbing, a trip to Hitler's mountain eyrie was and is an frequent part of a vacation itinerary for American tour groups staying in Berchtesgaden or nearby Salzburg. 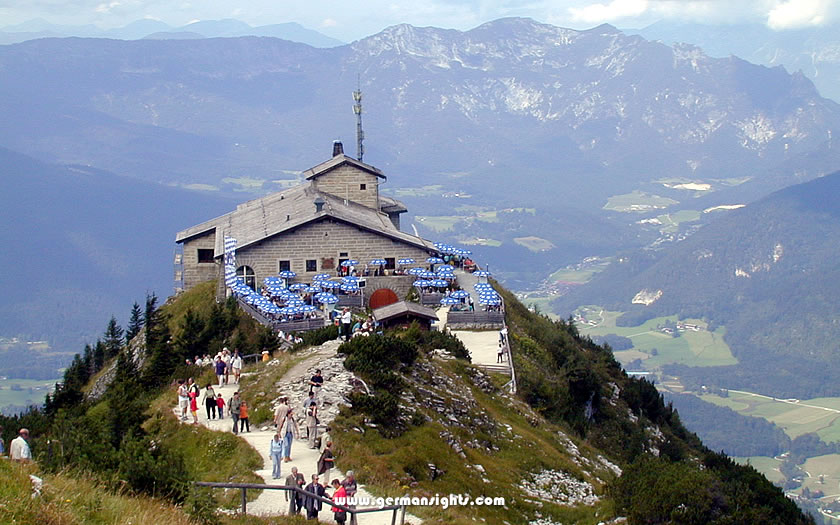 The Eagles Nest on the Kehlstein above Berchtesgaden

Obersalzberg, the hamlet where Hitler originally stayed on his visits to the area, had become popular with the wealthier levels of society and with artists towards the end of the 19th century. Visitor numbers had risen more than fivefold between 1890 and 1921.

But the scenic mountains of the area were also tied into Germanic myth - the Watzmann mountain and the Untersberg, both visible from the peaks above Obersalzberg - and these legends of sleeping giants waiting for a reawakening exerted a powerful pull to those seeking to topple the established order.

Hitler had first rented and then bought and remodelled a farmhouse in Obersalzberg. By the end of the 1930s the original inhabitants had been bought out or pressured to give up their properties and move away. Obersalzberg was now the preserve of the high-ranking officials in the Nazi government.

In the meantime tourism boomed - thousands of people (up to 5000 a day) travelled to Hitler's mountain home in the hope of seeing their leader.

The Eagle's Nest building on the Kehlstein was constructed as a present to Hitler for his 50th birthday (in 1939). A special road was blasted out of the mountainside and a lift inside the rock whisked visitors from the top parking place to the structure on the ridge.

Ironically Hitler spent very little time at the Eagle's Nest since he did not enjoy heights, preferring to stay down in his farmhouse in the valley. However, both during his rule and post-war, the building of the Eagle's Nest took on a symbolic weight.

At the end of the war Obersalzberg was heavily bombed, although the tunnel network which had been built prevented many deaths and Hitler's Eagle's Nest was untouched. Post-war some of the land was used as an Armed Forces Recreation Area for the US army.

Nowadays it is only possible to reach the Eagle's Nest on foot (by means of mountain walking trails) or on the private road where only official buses are allowed. The road, lift through the mountain and Eagle's Nest are only open in the summer months.
Website: www.kehlsteinhaus.de

In the hamlet of Obersalzberg, the wartime bunkers can still be visited as part of a visit to the Obersalzberg Documentation Centre near the start of the bus services up to the Kehlstein. (The Berghof, Hitler's residence in Obersalzberg, was razed to the ground.)

The Documentation Centre was built in 1999 and, as their website says, is "a place of learning and remembrance relating to the history of Obersalzberg and the National Socialist dictatorship". As well as the exhibitions for visitors, the centre attempts to counter right-wing extremism by means of education and research.

It is open all week from April until October and closed on Mondays in the winter.
Website: www.obersalzberg.de

The Berchtesgaden National Park was opened in the 1970s and is Germany's only alpine park.

The area around the Königssee lake and the Watzmann mountain had been protected by earlier projects but in the 1960s the plans were threatened by proposals by the local communities to build a cable car up the Watzmann.

The National Park was implemented by the state of Bavaria and thwarted those plans, which led to criticism from locals and a still occasionally tense relationship with the communities affected by the park. 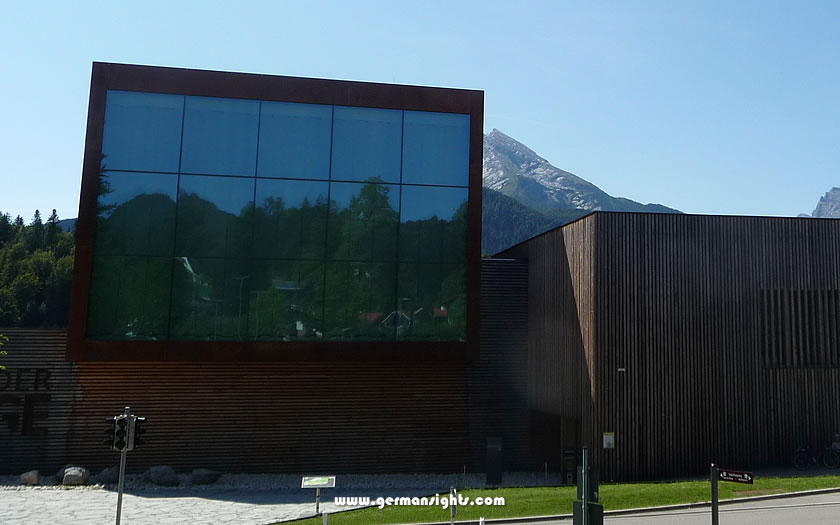 The Haus der Berge centre for the Berchtesgaden National Park

The National Park area is bounded by the buffer zone of the larger Berchtesgaden Alpine Park (with a set of less strict conservation rules).

The park covers an area of 210km² in the Berchtesgadener Land and welcomes around 1.5 million visitors each year. There are 260km of marked walking trails within the park and a programme of educational guided walks offered by the park management.

The modern National Park tourist office - the Haus der Berge - is located further out of the centre past the train station. It is open every day and has regular exhibitions and films about hiking in the Bavarian Alps.
Website: www.haus-der-berge.bayern.de

The tourist office is situated just off the main street through the town and is open on weekdays all year round and at the weekend in season. They produce a pamphlet for walking tour of Berchtesgaden history, mainly through the old town. (Another themed walk is produced by the salt mine.)
Website: www.berchtesgaden.de