Meiningen was once the capital of its own independent region and has remained the cultural hub of the southwestern part of Thuringia.

It is located to the south of Eisenach and Schmalkalden on the edges of the Thuringian Forest. It is very close to the border with Hesse and Bavaria and, like its neighbour Schmalkalden, is regarded as part of the Franconian region which spans parts of those three states.

The parish church of Meiningen in Thuringia

Methods of travelling to Meiningen and accommodation options on arrival are available on the following page:
Meiningen Hotels & Travel

The history of Meiningen goes back to the 10th century when it was first mentioned in legal documents.

The town remained something of a backwater for centuries as a centre for clothmaking but in the 17th century it suddenly sprung to a degree of prominence.

Succession problems with the regional ruling family meant that a number of small duchies were created. 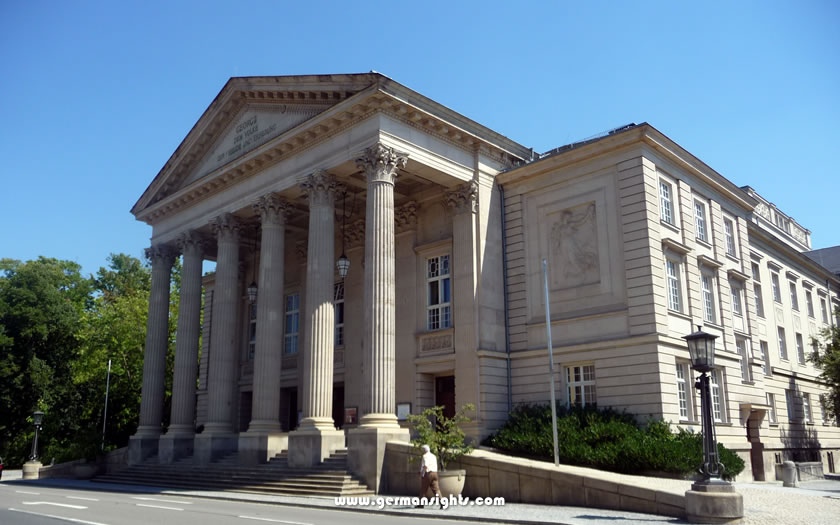 The theatre in Meiningen

The Duchy of Saxe-Meiningen was given to one of the sons and he made Meiningen the capital, giving it the status of a ducal residence town (a 'Residenzstadt').

The actual residence building where the duke lived was built during this time and the Elisabethenburg castle still stands on the edge of the town centre, housing art collections and the Meiningen Museum.

Some of the cultural heritage of the town dates back to these days - the English gardens were created in the late 18th century and the original court theatre was built in the early 19th century.

The Meiningen theatre has an important historical role in German culture and the location is known as the 'theatre town'. Encouraged and financed by Duke George II, the Meiningen theatre and its principles took a leading part in creating a more democratic and historically authentic style of production. Its productions toured around Europe for 16 years in the late 19th century and some of the original stage sets can be seen in the Meiningen Theatre Museum.

The tourist office is situated in a small office near the church in the centre of the pedestrian area . It is open all week except Sundays with slightly restricted opening times on Saturdays:
Website: www.meiningen.de