Amberg is a medium-sized town in the Upper Palatinate area of Bavaria situated on the Vils river to the east of Nuremberg and to the north of Regensburg.

The former ore-mining settlement has an attractive and well-preserved old town dating from the Middle Ages which is less known and certainly underrated compared to its better-known neighbours. 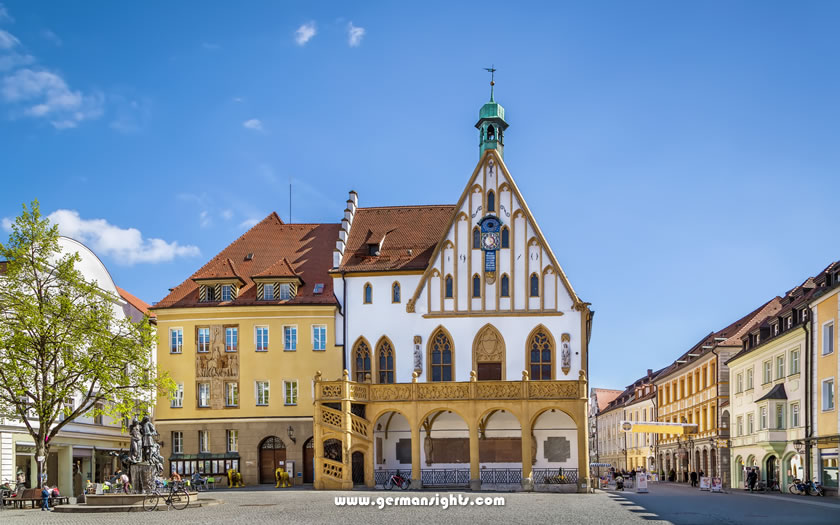 The Gothic town hall in Amberg

Perhaps that is the reason that the town doesn't have a massive choice of hotel accommodation - more information about what is on offer and travel to the town is available on the travel page:
Amberg Hotels & Travel

Settlement in the Amberg area is thought to have begun in the 8th and 9th centuries, although the first written mention of the town is from the 10th century, when it is referred to as 'Ammenberg'.

The town became a centre for mining the local iron ore deposits and a transport and trading hub down the Vils river to the Naab and from there south through Bavaria to the Danube and Passau. The iron ore was mostly transported downstream to Regensburg and the return journey loaded up with salt. 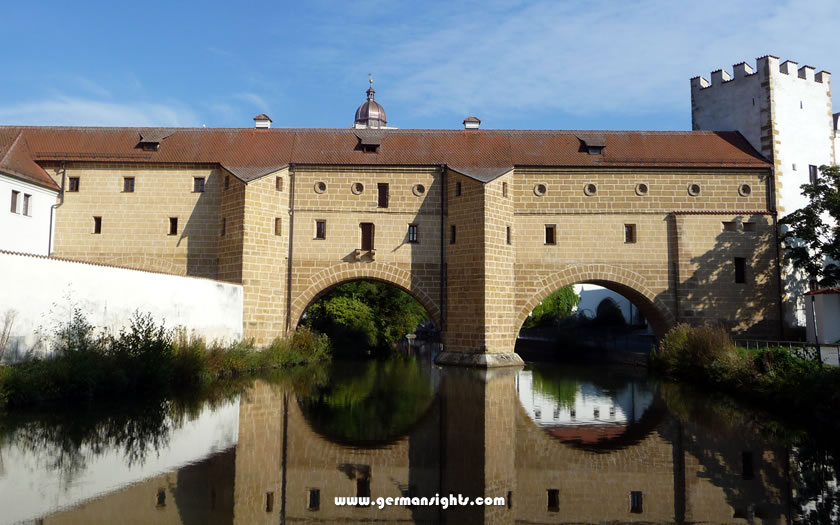 The 'Stadtbrille' in the city walls of Amberg

Like other towns in Germany, Amberg suffered through the turbulence of the religious disputes of the Reformation and Counter-Reformation. Amberg managed also to have an armed dispute between the Protestant followers of Luther and those of Calvin.

Eventually the town became strongly Catholic once again and Protestants were either expelled or left for the neighbouring cities of Nuremberg and Regensburg, which retained more religious freedom for their inhabitants.

Amberg has been a garrison town since the beginning of the 18th century but the historic centre and city walls were spared major bombardment and destruction in the Second World War.

Post-war refugees and displaced persons increased the size of the town's population by a third to around 40,000, a number which has remained relatively constant up to this day.

In recent years, the historic centre has been renovated and the town is becoming a regional tourist attraction and a visitor magnet, with tourist attractions such as the remaining city walls and the baroque architecture.

The Amberg tourist office is located near the Marktplatz behind the Gothic town hall. It is open from Monday to Friday and on Saturday mornings in the summer season:
Website: tourismus.amberg.de