The sprawling city of Ingolstadt is often over-shadowed by its better-known and larger neighbours: Munich, Augsburg, Nuremberg and Regensburg.

Nowadays it is known for being the headquarters of Audi but once it was the capital of a short-lived independent statelet and is the seat of the first university to be founded in Bavaria.

It was also the location of the original proclamation of the renowned Bavarian state beer purity laws (which existed in one form or another until weakened by a European court decision in the 1980s). 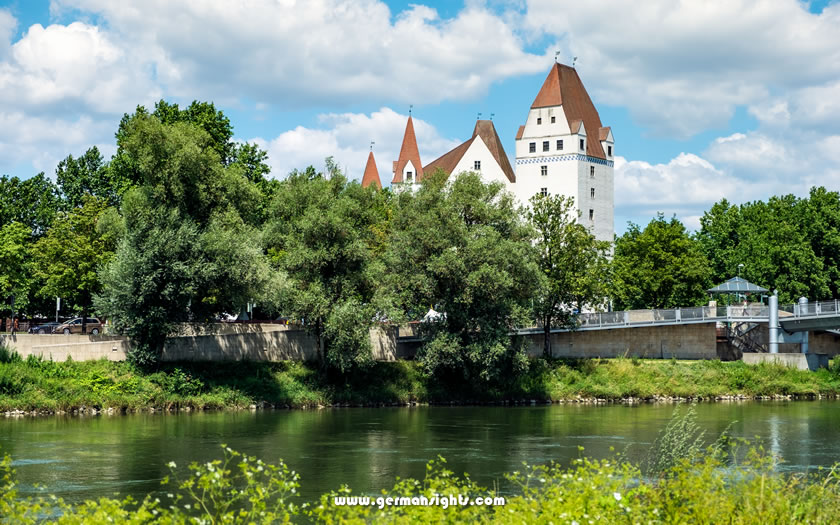 The Danube and the Neue Schloss in Ingolstadt

Ingolstadt is located on the main A9 motorway between Munich and Nuremberg and has its own Intercity train station. Transport information and accommodation details can be seen on our travel page: Ingolstadt Hotels & Travel

Settlement in the Ingolstadt region can be dated back to the Stone and Bronze Ages, with one of the largest Bronze Age grave sites being discovered nearby.

The first mention of a settlement came at the start of the 9th century and, by the time of the 13th century, it had grown large enough to be awarded a town charter.

Ingolstadt itself became the capital of a small duchy when the province of Bavaria suffered inheritance problems and was split up in the 14th century. 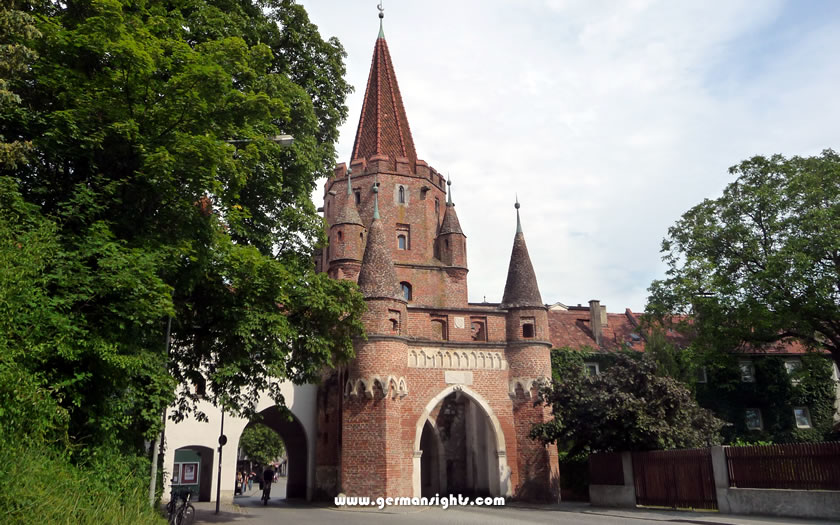 The Kreuztor tower in Ingolstadt

The independent duchy lasted less than a century before it was taken over by a rival state based in nearby Landshut. However some of the oldest buildings in Ingolstadt date from this period, including the former ducal residence, the Neue Schloss and the Ingolstadt Minster.

The loss of independence did not diminish the importance of the town, however. The first university in Bavaria was founded here in the 15th century and became one of the most important in the German-speaking world before it was eventually moved to Landshut and then to Munich.

Nowadays it is perhaps better known as the setting for Mary Shelley's novel Frankenstein and as the location where the secret society of the Illuminati was founded.

Ingolstadt lay at a junction of major trading routes - the river Danube was already important as a commercial artery - and the strategic position of the city was recognised when construction was started which extended the walls and castle and eventually in the 16th century turned the city into a state fortress. 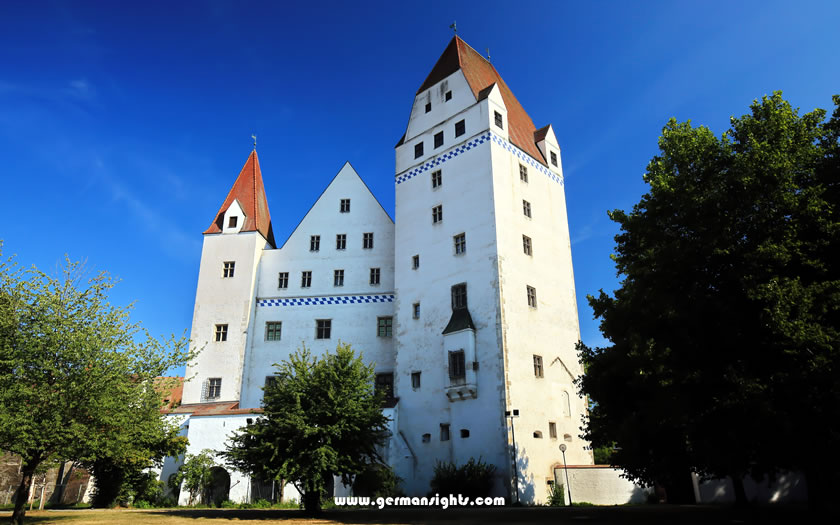 The Neues Schloss in Ingolstadt

The Neues Schloss, or 'New Castle', was the important original part of the fortified city but the walls and redoubts surrounding the city were extended and expanded over the centuries up until the 20th century.

The cleared areas in front of the former fortifications are now part of the character of the city, with parks and open areas creating an unusual amount of green space in the centre of the settlement.

Those interested in military history can pick up a leaflet giving details of a walking tour of the old fortifications from the tourist office.

Meanwhile the New Castle is still related to the military: it is the site of the Museum of the Bavarian Army. Outside it are a row of cannons from various epochs - the oldest date back to the 16th century.

Through the baroque clock tower gate linking the castle courtyard to the former parade ground is the fountain and statue dedicated to Ludwig the Bavarian and, beyond, the main shopping street of Ingolstadt with its gabled houses and baroque facades.

Most of the historic sights in the inner city can be seen in a couple of hours of leisurely walking. Again, a leaflet detailing the main sights is available from the tourist office in various languages.

There are three tourist information offices in Ingolstadt. The main one is located in the Altes Rathaus in the centre, while the other two are at the main railway station and in the Ingolstadt Village outlet centre. The main tourist office is open every day in summer (until early afternoon on the weekends) and closed on Sundays in the winter months.
Website: www.ingolstadt-tourismus.de