Lichtenstein Castle was built on one of the most spectacular settings on a cliff face above the surrounding countryside in southern Germany.

Despite its turrets and defences that appear to date from the Middle Ages, it is actually one of the 'Gothic Revival' type of castle which was built during a surge of nostalgia for the age of knights and chivalry in the 19th century.

But the castle, on the edge of the Swabian Alb south of Reutlingen, is well worth a visit for its stunning location and the scenic drive through the lovely Baden-Württemberg countryside. 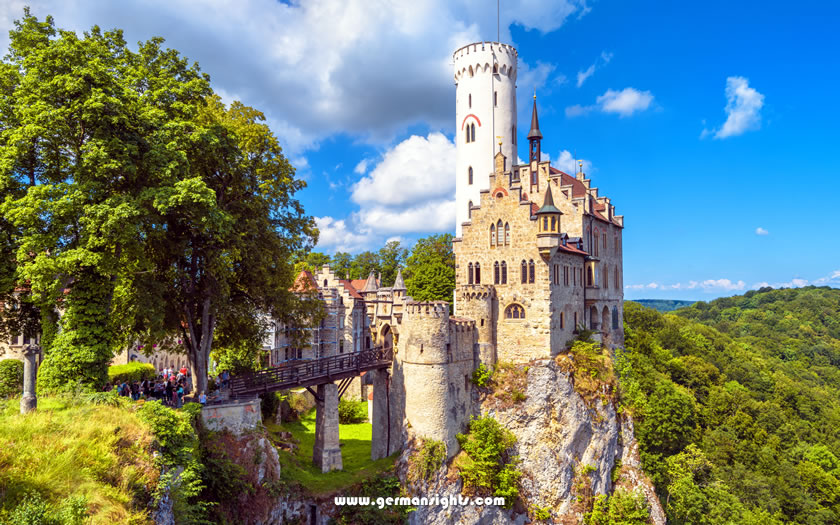 Where is Lichtenstein Castle located in Germany?

Schloss Lichtenstein is located in the German state of Baden-Württemberg south of Reutlingen near the village of Honau on the edge of the Swabian Alb mountains.

When was Lichtenstein Castle built?

The current castle was built in the mid-19th century but it stands on the foundations of a castle from the 14th century.

Lichtenstein Castle was built by Duke Wilhelm of Urach and remains in the hands of his descendants.

How far is Lichtenstein Castle from Stuttgart?

Lichtenstein Castle is in Swabia around 60 kilometres south of Stuttgart and about an hour's drive from the city.

How do you get to Lichtenstein Castle?

The castle can be reached via the B27 and B213 roads just south of the village of Honau. There is a large car park in the castle grounds a short walk from the entrance.

The original Lichtenstein castle stood around 500 metres away from the current building and is thought to have been built at the beginning of the 12th century.

The medieval castle was owned by the Dukes of Lichtenstein and was destroyed twice in local wars before being rebuilt on the current position in the 14th century.

It came into the hands of the Imperial Austrian Habsburg family when the line of Lichtenstein nobles died out and, at the start of the 19th century, was mostly dismantled by the King of Württemberg, who replaced it with a hunting lodge on the original foundations.

The exterior of Lichtenstein Castle

During the Romantic revival of the 19th century, writer Wilhelm Hauff wrote the novel 'Lichtenstein', which dramatised the life of one of the medieval dukes of Urach.

A descendant of the family, Count Wilhelm of Württemberg (later to become Duke of Urach himself) had been looking for a suitable location for a summer residence and was fascinated by the novel.

He purchased the land where the hunting lodge stood and ordered the building of the new castle on the old castle foundations. It was built between 1842 and 1844 and is considered one of the best examples of the Gothic Revival style of castle in southern Germany. 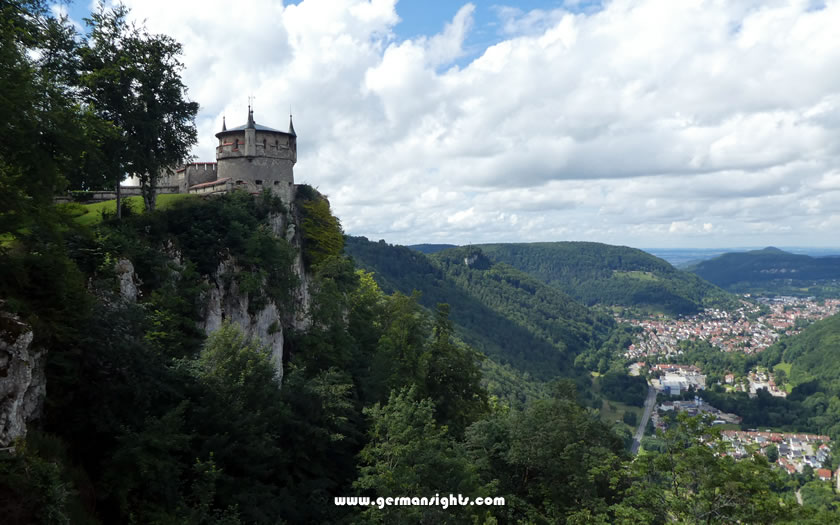 View from Liechtenstein Castle to the Echaz valley

The castle is still owned by the Urach family and visitors can tour the exterior courtyard area and much of the interior on guided tours.

Those who enjoy this castle may wish to take the short journey to tour the impressive Hohenzollern castle, around 40 kilometres to the southwest in the Swabian Alps.

The map below shows the location of the castle and some of the accommodation available in the Swabian Jura region. The map can be zoomed in and out by using the '+' and '-' markers.