The castle at Linderhof - sometimes also referred to as 'Linderhof Palace' - is part of the famed legacy of the Bavarian King Ludwig II. It is situated just off the German Alpine Road route in the Bavarian Alps.

It is one of the main sights in southern Germany and is only a few kilometres from Oberammergau, with its Passion Play theatre, and Ettal Abbey on the way between Oberammergau and Garmisch-Partenkirchen.

Although not as architecturally as impressive as Neuschwanstein Castle, Linderhof is the most approachable of Ludwig's palaces. More of a hunting lodge than a palace, it was the only one of his buildings finished in his lifetime.

Where is Linderhof Castle located in Germany?

Linderhof Castle is located about 14 kilometres from the Passion Play village of Oberammergau in the German state of Bavaria.

When was Linderhof Castle built?

Work started on the Linderhof Castle project in 1869 and finished in 1878.

Linderhof Castle was built by King Ludwig II of Bavaria (also known as 'the Fairytale King') as one of a number of castle projects which strained the finances of Bavaria. It is the only castle that was finished during his lifetime.

How far is Linderhof Palace from Munich?

Linderhof Palace is around 100 kilometres from Munich and about 90 minutes drive away from the city. There are regular day excursions on bus tours organised from Munich.

How do you get to Linderhof Castle?

It is possible to walk through the Graswang valley to Linderhof Castle from Oberammergau in under three hourse or to take a regular public bus from the centre of the village. There is also a large visitor car park near the castle entrance.

Originally, the building in the Graswang valley near Ettal was supposed to be inspired by the palace at Versailles built by the French 'Sun King' Louis XIV. (Some say that Ludwig II saw himself as the 'Moon King'.)

Space limitations in the mountainous terrain meant that these plans eventually were transferred to an island in the Chiemsee (and became Herrenchiemsee Palace).

Instead Linderhof Castle became the site of a planned royal 'retreat' - a country residence again inspired by Louis XIV's buildings, this time a more intimate and homely structure based on the former palace at Marly-le-Roi or the Petit Trianon at Versailles.

The location of the construction was an old forestry house that had been used by Ludwig's father on hunting expeditions in the valley. This was extended (and eventually moved) as the planned building became larger during the project, which started in 1869. The original buildings were wooden but in a later construction phase stone cladding was added to form the facades that visitors can see today.

Nearly 450,000 people visit the castle each year and it is a very popular location for coach tours in the summer months. Visits to the palace interior can only be made as part of a guided tour (the castle tour takes around 30 minutes). Tours in different languages at a particular time are allocated at the ticket office at the entrance to the grounds.

The interior is decorated in an ornate rococo manner and gives an idea of the daily life of the King, as well as his fascination with the French style of the previous century. 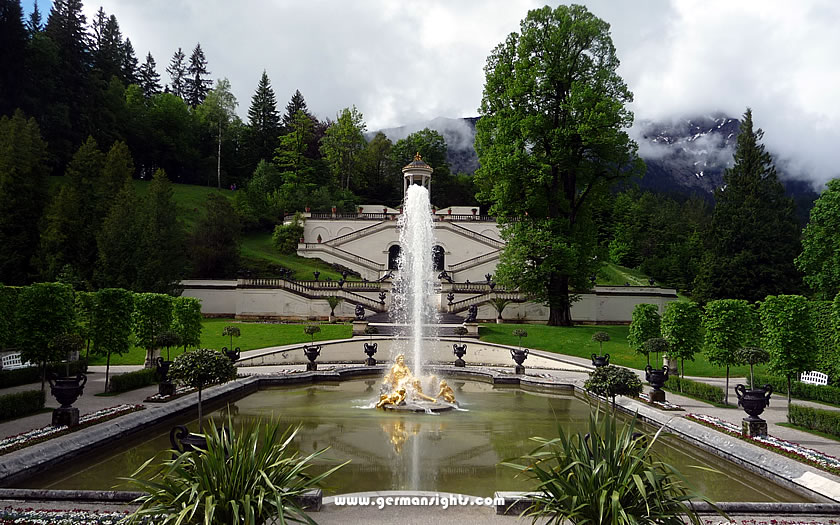 The gardens at Schloss Linderhof

The castle is surrounded by extensive formal gardens which are worth visiting if there is any time to kill before a tour. The fountain outside the main building (pictured above) plays on the hour and half-hour.

There are also a number of buildings in the palace grounds that it is possible to visit with an extended visitor ticket.

Perhaps the most popular is the Venus Grotto, based on a location in one of Wagner's operas and where Ludwig II let himself be rowed in a swan boat across a miniature lake with an artificial wave machine and rainbow effects. (These quirks were powered by the first electrical power station in Bavaria.)

Other buildings include a Moorish kiosk, a Moroccan house and two more wooden buildings based on Wagner's operas. Some of these were built further away from the castle in Ludwig's day but have been restored and placed in the current palace grounds.

The original forester's house - located on the path between the ticket office and the castle - now houses temporary exhibitions about the King and castle.