Lindau is one of southern Germany's most picturesque towns with an interesting old town located on an island off the shores of Lake Constance.

A favourite walk for almost every visitor in good weather is out to the lighthouse and the Bavarian lion at the harbour entrance with a stunning view back over the water to Lindau's old town.

There is plenty to see and do in the town itself, but it also makes a good base for exploring other towns along the lake shore both in Germany and across the borders in towns like Bregenz in Austria and even into nearby Switzerland.

The summer ferry services make it easy to visit other Lake Constance towns, such as Friedrichshafen, Meersburg and Konstanz, while admiring the backdrop of the Alps.

Lindau is also the starting point for those who are planning on doing the drive along the German Alpine Road tourist route. 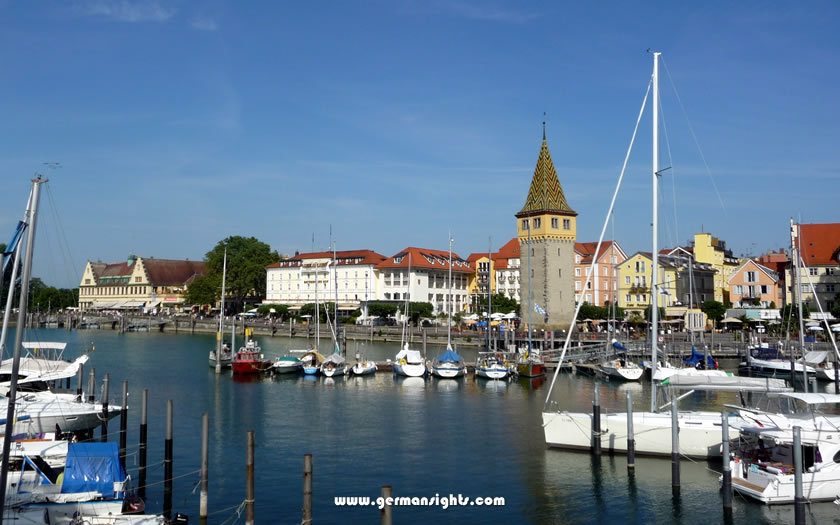 The harbour at Lindau

As a popular destination for tourists, Lindau has plenty of hotel accommodation both in the heart of the historic town on the island and, more conveniently for car drivers, on the mainland nearer the main land transport connections.

Information about hotel and apartment accommodation as well as details of the closest airport and ferry connections to other towns can be seen on our travel page:
Lindau Hotels & Travel

Evidence of Roman settlement has been discovered nearby on the mainland, but the first recorded mention of Lindau (the 'island of lime trees') is towards the end of the 9th century.

It is thought that a Benedictine convent had been established here earlier in the same century (which later became the Minster in the centre of the town).

At the time there was also a small fishing settlement near what was later the Peterskirche. 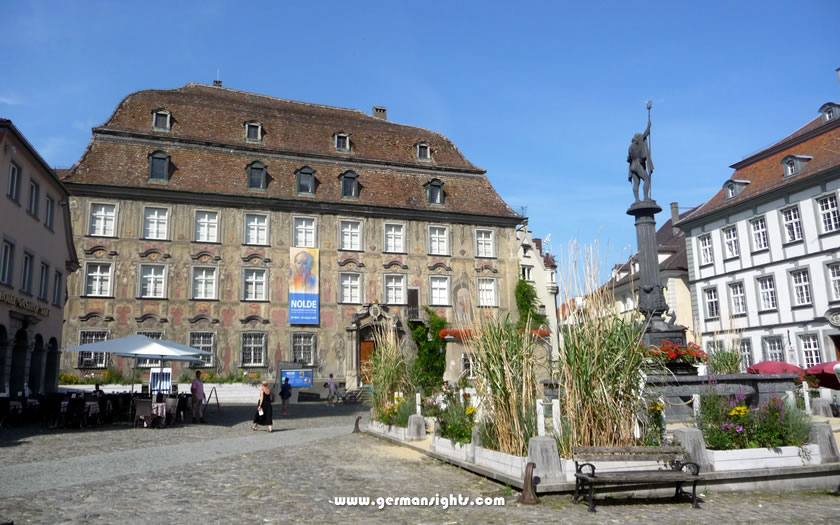 The museum in the historic town of Lindau

A big change, as with so many other successful towns, came with the move of the rights to hold a market to the island. Up until that point the market had been held on the mainland near the trade routes, but the island location meant that it was more secure in troubled times.

This led to a flourishing business settlement besides the convent and the fishing trade. By the time of the 13th century the relatively small town was important enough to be granted the status of 'free imperial city' (meaning that only the Holy Roman Emperor had power over it).

At the end of the 15th century an Imperial Diet (a governing assembly for the Holy Roman Empire) was held in Lindau - an event commemorated on the Old Town Hall in the town.

Trade from the Lindau area, with its moderate climate meaning that wine, fruit and flax could be grown, grew and eventually a regular commercial trading route was established between Lindau island and Milan (the 'Mailander Bote').

The island settlement was less damaged than other locations through the religious wars that plagued central Europe - it held out against a Swedish siege in the Thirty Years War - but was devastated by a fire which destroyed the centre in the 18th century.

Much of the 'look' of the historic buildings on the island dates from this Baroque period of reconstruction.

The religious buildings were handed to the state during Napoleonic times and Lindau lost its status as a free imperial city, becoming part of Bavaria when Napoleon was eventually defeated.

The 19th century saw the construction of important transport connections, with rail links to Augsburg and Bregenz and the new harbour.

Nowadays Lindau is a prosperous town of around 25000 inhabitants where the island lives mainly from tourism (for example, the German Alpine Road route starts here). Annually it reckons on around 800,000 visitor nights in the various levels of accommodation.

The agricultural and industrial areas, as well as the major shopping centres, are located in the surrounding area on the mainland closer to the main traffic arteries.

As a major tourist destination in southern Germany, there is plenty going on for the visitor to Lindau.

The town holds a number of festivals throughout the year - some of them important historically and some, like the Oktoberfest and the Carnival celebrations, which are local versions of wider festivals. 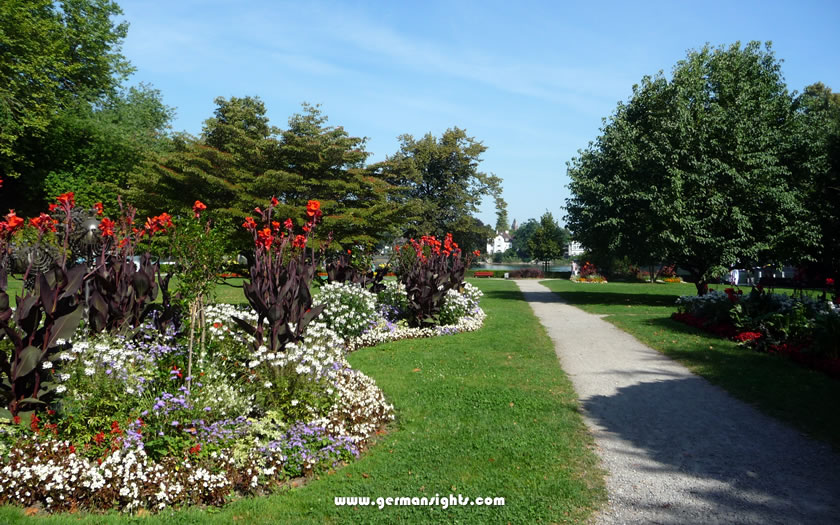 The Lindau Garden Festival is held for three days every year at the beginning of the summer.
Website: gartentage-lindau.de (German only)

The Lindau Children's Festival is one of the most important in the town. It dates back to the 17th century and is thought to have been started to encourage parents to send their children to school. These days it is held on the last Wednesday of the summer school holidays with a procession of schoolchildren led by young drummers to the Old Town Hall.
Website: www.kinderfest-lindau.de (German only)

The Lindau Nobel Laureate Meetings started in the 1950s. They are designed to foster communication and contact between leading scientists and students in the areas of physics, chemistry, physiology and medicine, and economics. Each year is devoted to a particular topic.
Website: www.lindau-nobel.org

The Lindau Oktoberfest is held on a weekend near the beginning of September and, like its more famous namesake in Munich, is devoted to the delights of beer, food and music.
Website: www.lindauer-oktoberfest.de (German only)

The Lindau Fasnacht is the local version of the celebrations - involving processions with traditional masks and costumes - which take place all over Germany in the period before Ash Wednesday and the hardships of Lent. Dating back to the Middle Ages, it was a time for people to let off steam before a period of abstinence.
Website: narrenzunft-lindau.de (German only)

The Lindau tourist office is located opposite the train station on the island and is open on weekdays morning and afternoon. Out of office hours a walking map for guests (with short descriptions of sights) is available from the foyer outside the office.
Website: www.lindau-tourismus.de