The Bavarian Forest is an area of ancient mountain woodlands on the border between Germany and the Czech Republic.

It stretches from the border with Austria near Passau up the eastern bank of the Danube to the Upper Palatinate region of Bavaria.

The area is famous for its mining towns, glassmaking and, in more recent years, for its tourist attractions, with climatic resort towns, networks of walking trails and plenty of opportunity for mountain bikers. 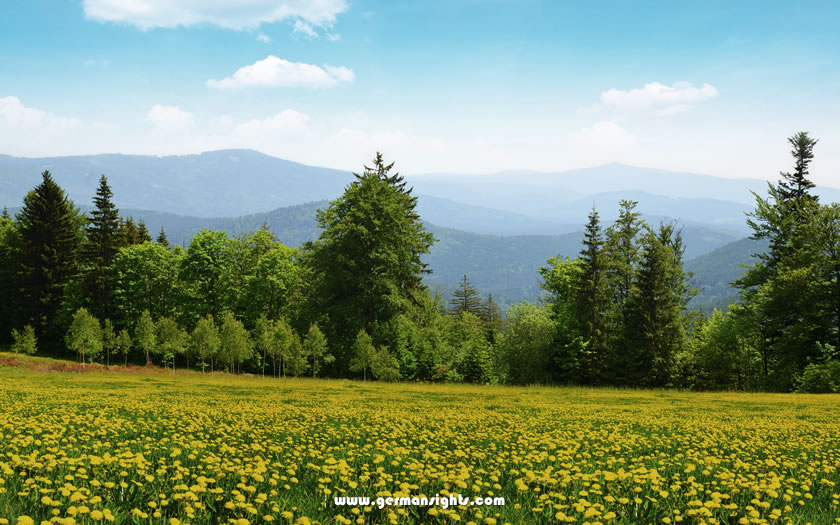 Reckoned to be the largest forest in central Europe, the region is made up of two nature reserves ('Naturpark') and Germany's first national park:

Over the border in the Czech Republic, the German national park is mirrored by the National Park Šumava, which is also surrounded by a larger nature reserve.

Sights in the Bavarian Forest

The Bavarian Forest is primarily a destination for those who love the outdoors, with its multitude of walking trails and bike routes and beautiful wooded hills and farmland.

But those who want to spend some less strenuous time in the area will find plenty to keep them occupied. Most of the towns in the area will have a local museum detailing the history of their particular region and how local inhabitants used to interact with the landscape. 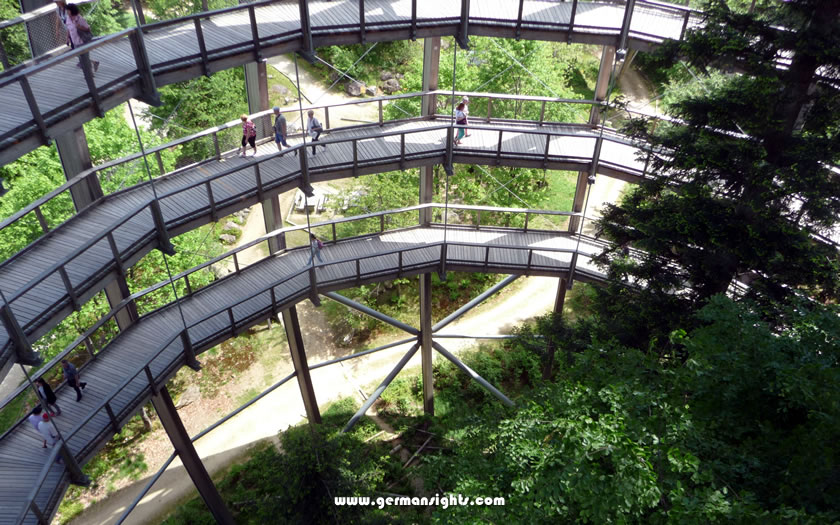 The Treetop Walk in the Bavarian Forest National Park

The Nationalparkzentrum Falkenstein can be accessed on both the Igelbus and Waldbahn (both stops named Ludwigsthal). The exhibition centre also has a 3D cinema and a restaurant as well as an open-air animal park.

The Nationalparkzentrum Lusen can be reached on the Igelbus (Neuschönau stop) and also has an exhibition centre as well as vegetation and geology trails. One of the most impressive features in the Bavarian Forest is the Treetop Trail ('Baumwipfelpfad', pictured above) with fabulous views out over the forest from the popular wooden walk.
Website: www.nationalpark-bayerischer-wald.de
Website: www.baumwipfelpfad.bayern

Elsewhere in the Naturpark Bayerischer Wald, there is another impressive forest-top trail (the 'Waldwipfelweg') at Sankt Engelmar in the hills above Deggendorf and Straubing with views out over the forest as well as the lowlands along the Danube.
Website: www.waldwipfelweg.de

Those looking for more activities could do worse than basing themselves at Bodenmais. This small town, at the base of the Silberberg and near the highest mountain in the forest, the Grosser Arber, is one of the ski resorts in the Bavarian Forest in the winter and is busy with walkers and bikers in the summer months. 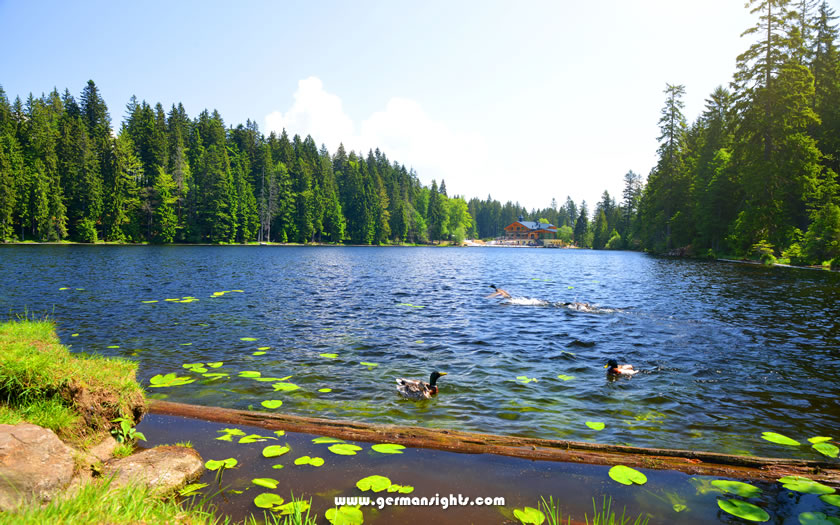 The Grosser Arbersee in the Bavarian Forest

The Grosser Arber can be recognised from some distance away with its distinctive round radar domes on the 1455m peak (these are a remnant of Cold War spying on East bloc flight operations!) and can be reached from Zwiesel, Bodenmais and Bayerisch Eisenstein.

For skiers interested in the Arber family ski area with its five lifts, Bayerisch Eisenstein on the border with the Czech Republic can be reached on the Waldbahn railway and runs a regular ski bus service to the lifts. The border railway station has its own rail museum and also offers train services to Pilsen (famous for its beer).

The Arber gondola also operates in the summer for hikers, but there are marked walking trails from both Bodenmais and Bayerisch Eisenstein.

Walking Trails in the Bavarian Forest

There are a number of long-distance walking trails which cross through the forests and meadows of the region. Probably the best-known is the Goldsteig, a circular route of 660km south from the Upper Palatinate Forest to the Danube at Passau and back through the Czech Republic. This historic salt and grain trading route is well-marked with its own signs.
Website: www.goldsteig-wandern.de

The Baierweg takes another trading route on a roundabout journey of 7 days and just under 160km from Straubing east through the Bavarian Forest over the Czech border and back into Bavaria at Furth im Wald.
Website: www.baierweg.de

The Böhmweg follows the trading route between Deggendorf and Bayerisch Eisenstein on the Czech border.

The Pandurensteig takes the route of the Panduren - plunderers who caused havoc in the region during the 18th century - from Waldmünchen in the north to Passau in the south.

The Gläserne Steig is a six-day hiking trail which links glassmaking settlements and museums in the border areas from Arrach through to Grafenau.

Map of Accommodation near the Bavarian Forest

Public Transport in the Bavarian Forest

The Waldbahn
The Waldbahn is a local rail service which links important parts of the Bavarian Forest region. The service runs from Plattling (a junction with the main rail services) and Deggendorf in the valley through to Zwiesel, where there are connecting services to Bodenmais, Bayerisch Eisenstein, and Grafenau. There is also a service which connects Viechtach to Gotteszell.

There is a day ticket available offering unlimited travel on the Waldbahn and the routes are also covered under the Bayern Ticket.

The Igelbus
The Igelbus ('Hedgehog Bus') is the name for a number of bus routes connecting more out-of-the-way locations in the Bavarian Forest with bus services run on natural gas.

More than 20 towns and villages in the forest offer a free ticket - the Bayerwald Ticket GUTi - to guests staying in their area. This ticket covers the entire public bus and local train services within the Bavarian Forest - the day ticket can be purchased by those staying in non-participating settlements or who are coming into the Bavarian Forest from outside.