Things to do in Stuttgart

Stuttgart is the capital of the province of Baden-Württemberg in southern Germany.

The sixth-largest city in Germany, it has grown into a hub for international companies and advanced technology but also has vineyards and hiking trails on the many hills within the city limits.

There are plenty of things to do in Stuttgart, both in the city centre and on a day trip out to the towns and historic sights in the greater Stuttgart area. 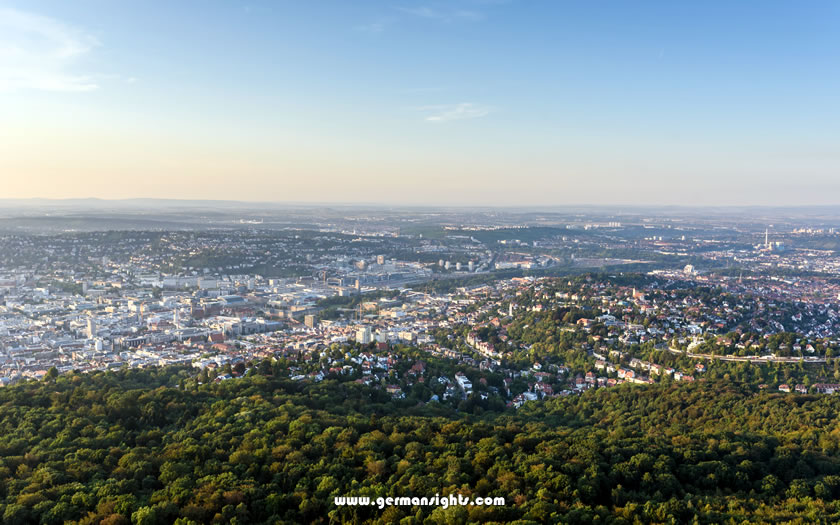 Things to do in Stuttgart city

The place where most visitors start from is the massive square in the city centre. Schlossplatz means 'palace square' and one side of the massive open area a short walk from the main train station is taken up by the New Palace, an impressive Baroque palace which was once the residence of the Kings of Württemberg.

The imposing building, started in the 18th century and almost completely destroyed during air raids in World War II was rebuilt and now houses government offices.

It is not the only palace on Schlossplatz as the State Museum of Württemberg is located in the Old Castle (which the New Palace was designed to replace). The museum features the provincial history as well as items such as the Württemberg crown jewels from the former rulers. 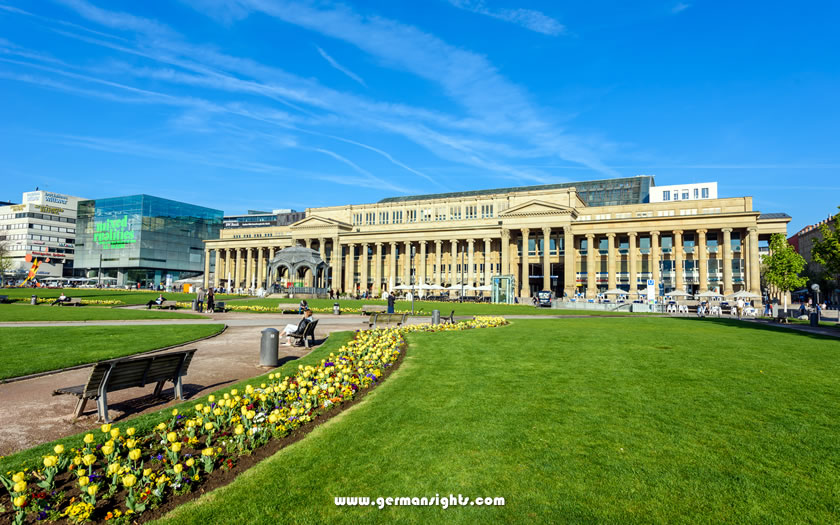 The New Palace in Stuttgart

Talking of museums, anyone who is loves car history will enjoy themeselves in Stuttgart. A car lover can choose from two different car museums: the Mercedes-Benz Museum or the Porsche Museum.

The Mercedes-Benz Museum is located along the Neckar river to the south-east of the city centre and can be reached by river boat, bike path, underground train or through the palace gardens.

A museum with a difference is just on the other side of the Neckar from the Mercedes-Benz Museum. The Schweinemuseum ('Pig Museum') - supposedly the largest in the world - is located in a former slaughterhouse and, as well as everything anybody would like to know about pigs, also has an outdoor beer garden and restaurant.

Over in the Bad Cannstatt region of Stuttgart, the Wilhelma is a combination of zoo and botanical garden in a historic palace built in the 19th century in the park area by the Neckar.

In fact, more active visitors go on foot from the central Schlossplatz through the palace garden ('Schlossgarten') down to the Neckar river for a visit to the Wilhelma or other riverside attractions. The walking distance is just over four kilometres and should take under an hour. 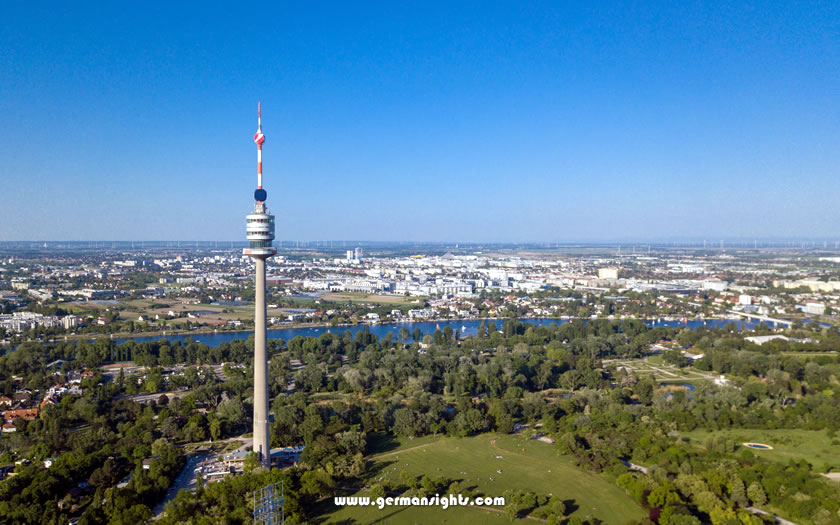 The TV tower in Stuttgart

The Stuttgart TV tower can be seen from almost everywhere in Stuttgart and offers fabulous views over southwest Germany. The television tower is on one of Stuttgart's hills to the south of the city centre (around three kilometres walking distance from Schlossplatz).

The tower, made from reinforced concrete and 217 metres tall, was a controversial landmark in the 1950s when it was built but seeing the views from the top is now one of the most popular things to do for visitors to the city.

Those wanting to explore the city centre in a more organised fashion can book a walking tour of downtown Stuttgart from the local tourist office. City tours using Segways and walking tours to some of the hills in the city can also be booked.

The hop-on hop-off bus routes can also function as a guided tour. The Stuttgart Citytour double-decker buses run on two different routes within the city centre.

The most popular, the Blue route, heads out to the river Neckar for the Wilhelmina and the Mercedes-Benz Museum. The Green route, which operates from Friday to Monday, visits the south of the city for the TV tower and some of the other less well-known attractions, like the rack railway and the funicular.

There is a third bus tour using smaller vehicles which visits the Stuttgart Museum of Viniculture and some of the wineries in the area. It also makes a stop at the burial chapel on the Württemberg hill.

Boat trips on the Neckar river can also be used to discover some of the city centre attractions and those a little farther afield.

One of the best ways to explore the Stuttgart region is by using the Baden-Württemberg Ticket. This deal on regional train journeys allows travel for 24 hours at a cheap base price for a single person and a few Euros more for each additional person.

The main train station in the city is Stuttgart Hauptbahnhof, which is currently undergoing massive redevelopment. From here regional, express and S-Bahn services span out across the Stuttgart area.

Ludwigsburg Palace is one of the most popular tourist attractions near Stuttgart. Built in the 18th century, it is certainly one of, if not the largest Baroque palace in Germany. It is only 15 kilometres to the north of Stuttgart near the Neckar river and can easily be reached by car or train.

The palace, a former residence of the Württemberg royal family, is a mixture of three very different architectural movements, with the Baroque combined with elements from the Rococo and Neo-Classicism periods.

It houses four museums covering fashion, ceramics, art and the royal private apartments. Children also have their own interactive museum where they can dress up and learn about life in days gone by.

As well as the residential palace, there are two other historic buildings to explore nearby: Schloss Favorite, used as a hunting retreat and in its own large parkland, and Monrepos, a lakeside palace a little way away from the other two buildings.

Schloss Solitude is another palace built in the rococo style in the 18th century and used as a hunting retreat by the royal family. It is around ten kilometres from the centre of Stuttgart. It can be reached by public transport.

Marbach am Neckar, Lauffen am Neckar and Besigheim are all towns further down the Neckar valley where visitors can discover the history on a stroll through the medieval buildings, city walls and towers remaining from the Middle Ages.

In the other direction, south towards the Swabian Alps, the old university town of Tübingen is well worth a visit. Around a third of the population of Tübingen are students, making the town the youngest in Germany.

Hohentübingen castle sits above the town on a rocky spur, while colourful buildings, many dating back to the Middle Ages, line the Neckar river.

Esslingen is another picturesque town in the Neckar valley southwest of Stuttgart with some of the oldest timber-framed houses in Germany, as well as fortifications dating back to the Middle Ages. 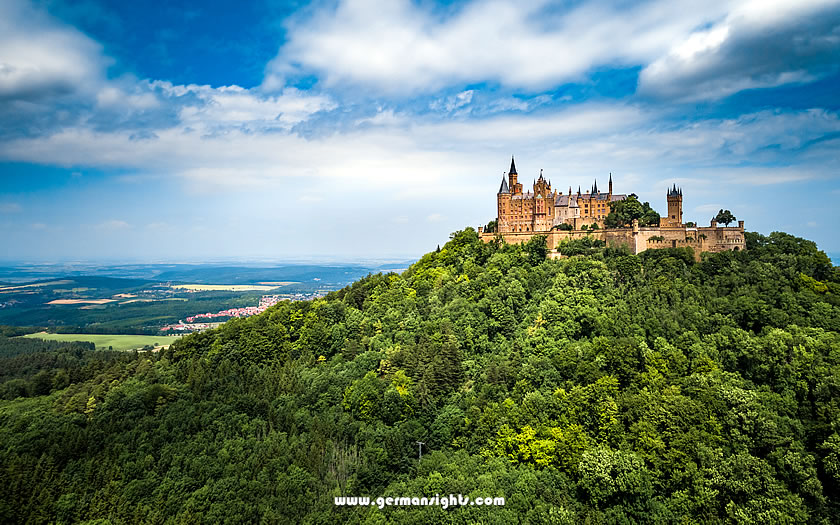 The Hohenzollern castle rising above the countryside just outside Hechingen is one of the more spectacular romantic castles in southern Germany. It is the family seat of a branch of the Hohenzollern dynasty and actually only dates back to the mid-19th century (although the original castle on this site is thought to have been built in the 11th century).

You may want to plan a trip for one of the local festivals. The Stuttgart Beer Festival (or, to give it its proper name, the Canstatter Volksfest) is the biggest festival in Baden Württemberg and attracts four million visitors each year.

It is the second-biggest beer festival in Germany.

Much like the largest, the better-known Oktoberfest in Munich, the beer tents are accompanied by one of the biggest funfairs in Europe.

The Stuttgart Christmas market is almost as big and is held during Advent in the main square outside the Old Castle. 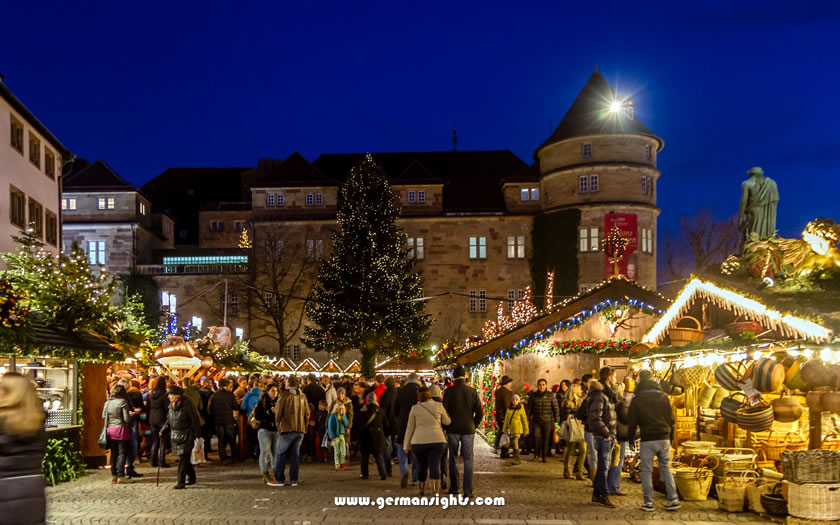 The Christmas market near the Old Castle in Stuttgart

The regular Stuttgart Summer Festival is popular at the beginning of August, although a little smaller than the two above. The programme of concerts and light shows takes place around the New Palace, the Opera House and the Eckensee in the palace garden, with plenty of food and wine options served under white pagodas.

Stuttgart tourism is dealt with by Stuttgart Marketing, who have a tourist office 'i-Punkt' opposite the main train station as well as another at Stuttgart airport.
Website: www.stuttgart-tourist.de