Reutlingen is a medium-sized city (population around 110,000) in Baden-Württemberg just to the south of Stuttgart.

Like its close neighbours Tübingen and Esslingen it acts very much as a dormitory community for the larger regional capital, but it does have enough history and sights to make a visit worthwhile.

Most of the sights of Reutlingen are along, or just off, the main axis of the Wilhelmstrasse, which passes through the main Marktplatz square and out to the other side of the main central part of the city. 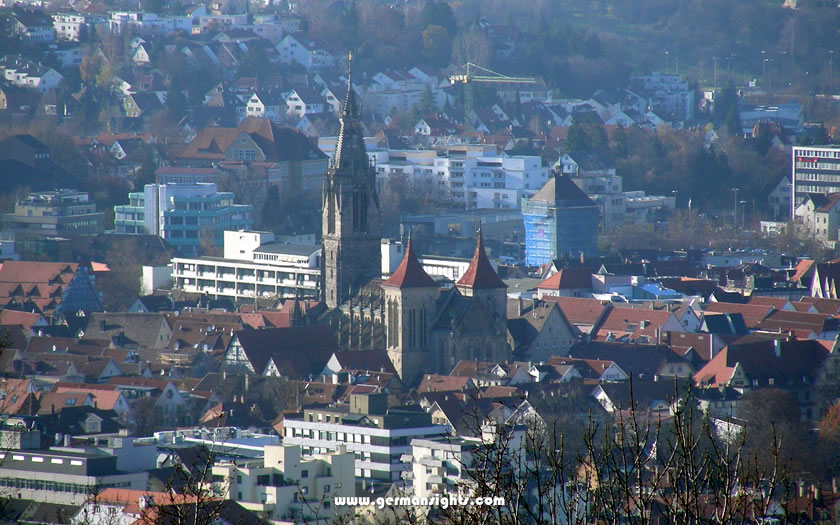 View over Reutlingen in southern Germany

Other interesting attractions can be seen on the outskirts of the historic centre, around what used to be the city walls and towers.

If you are looking for information about places to stay and the best way to get to Reutlingen then there are more details on our Reutlingen travel page:
Reutlingen Hotels & Travel

One of the original settlements near Reutlingen was on the Achalm, a hill which rises to just over 700 meters in altitude to the east of the city.

Archaeologists have found traces of a Celtic settlement from the 2-3rd century BC in the area, although there are indications of even older habitation within the city walls.

But the settlement which most authorities mark as the first of the town itself took place four or five centuries after the birth of Christ and during the fading power of the Roman Empire. 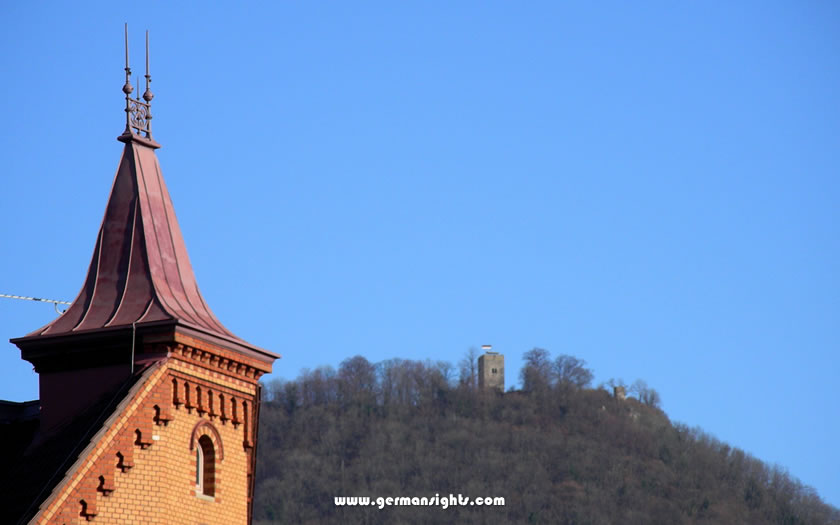 The Achalm fortifications above Reutlingen

The Alemanni tribes inhabited the area - their name remains in the French translation of Germany ("Allemagne") as well as the ending of the towns in the area ("-ingen" is a sign of an Alemannic settlement).

In the 11th century a local count built a fortress on the strongpoint of the Achalm and, in the following centuries, the town below received the right to hold a market and, later, the recognition as a town.

The history of Reutlingen in the Middle Ages is marked by attempts to retain its status as a "free city" with loyalty to the Emperor and attempts by local warlords, especially the county of Württemberg, to bring Reutlingen under their influence. Many of the town's fortifications and important buildings date from this time.

The Marienkirche, for example, was begun in the 13th century in gratitude for deliverance from a siege (and finished in the following century).

Eventually, however, Reutlingen came under the sway, both commercial and political, of Württemberg (even though the official decision was a few centuries away). 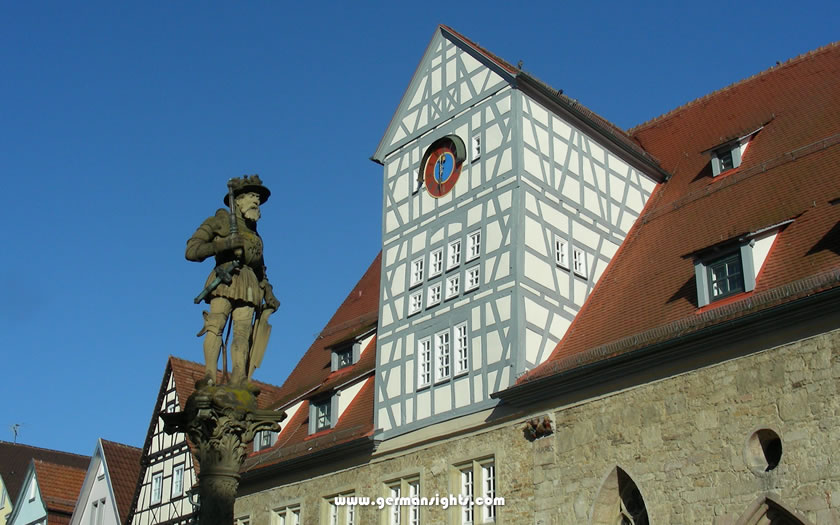 Reutlingen was one of the main centres of support for Luther during the Reformation and until the 19th century, adherence to the Augsburg Confession was obligatory if one wished to become a franchised citizen of Reutlingen (a "Bürger").

The city, like so many of its neighbours, suffered terribly during the 30 Years' War and lost a third of its population to disease and war.

The fire of 1726 destroyed many of the public buildings and townhouses during the three days that it burned and, although Reutlingen wearily rebuilt itself, it finally lost its official independence during the Napoleonic wars and became part of the Kingdom of Württemberg in 1802.

The town received a boost in the 19th century with the completion of a rail line and profited from light industry and the consequent influx of workers and inhabitants.

Reutlingen was badly damaged by air attacks at the end of World War II and lost 25% of its accommodation. The area was occupied by French troops and rebuilt under local commanders of the wartime resistance, one of whom (Oskar Kalbfell) was town mayor from 1945 to 1973.

Reutlingen reached the mark of 100,000 inhabitants in 1988 and has continued to grown since that time. It is the ninth largest city in Baden-Württemberg.

The Reutlingen Tourist Office is located in the central Marktplatz ('Market Square'). It is open Mon-Sat year round and daily guided tours of the town are offered in German in the summertime.
Website: tourismus-reutlingen.de