Weimar was once a fairly nondescript provincial town in the middle of Germany.

These days it is not only a former European City of Culture, it houses elements of two different UNESCO World Heritage sites and was once the capital of the German state of Thuringia.

It was also the site where the first democratic German constitution was signed and gave its name to the short-lived Weimar Republic between the World Wars.

And the town also played its part in the darker side of German history, with the site of the former Buchenwald concentration camp situated in the hills to the north. 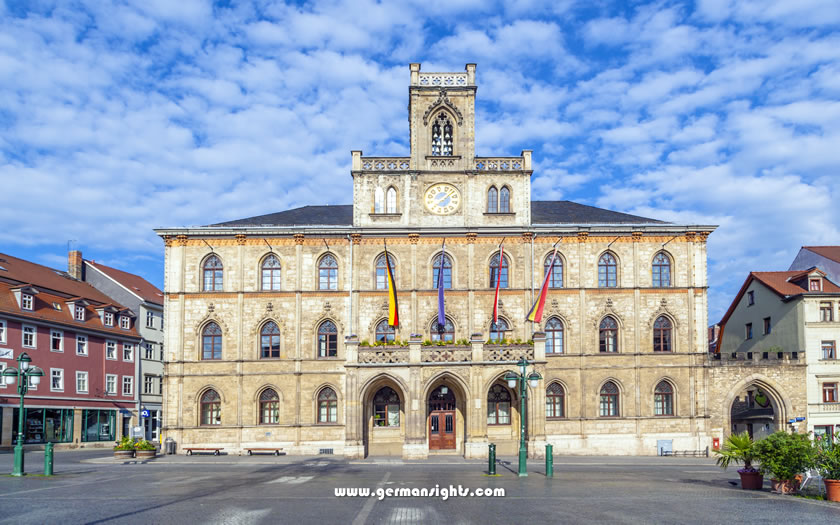 There are many different facets to the cultural history of Weimar. The town has been added to the list of UNESCO World Heritage sites twice. Once for the German cultural heritage of the town from the days of Goethe and Schiller, and once for the part it played in the architectural Bauhaus movement.

The Weimar period of German history refers to the interwar period in the 1920s, when Germany was racked by hyperinflation following the Versailles treaty and reparations at the end of the First World War. The Weimar constitution was adopted in the town at the start of the democratic German government in 1919. The Weimar democracy preceded Hitler's rise to power and the transition to Nazi Germany.

The phrase 'Weimar culture' refers not to the era of Goethe and Schiller but to this era of democracy in the Twenties with an explosion of creativity in art and architecture especially. (The Bauhaus movement also dates from this period.)

Weimar is in the centre of Thuringia and actually shares a regional airport with Erfurt - it might be easier though to fly into somewhere else. Transport information and accommodation details can be seen on our travel page:
Weimar Hotels & Travel

The area around Weimar was settled back in prehistoric times and a settlement later grew up around the fortifications of the local lord.

Although there are claims that what later became Weimar was mentioned in a document in the 9th century it wasn't until the 13th century that it was termed a town. The name Weimar possibly stems from the old German for 'holy lake' or 'holy moor'.

The official town charter was granted much later in the 15th century and, after a severe fire which destroyed much of the existing settlement, the castle fortifications were extended into a city wall - some of the remains of which can be seen today. 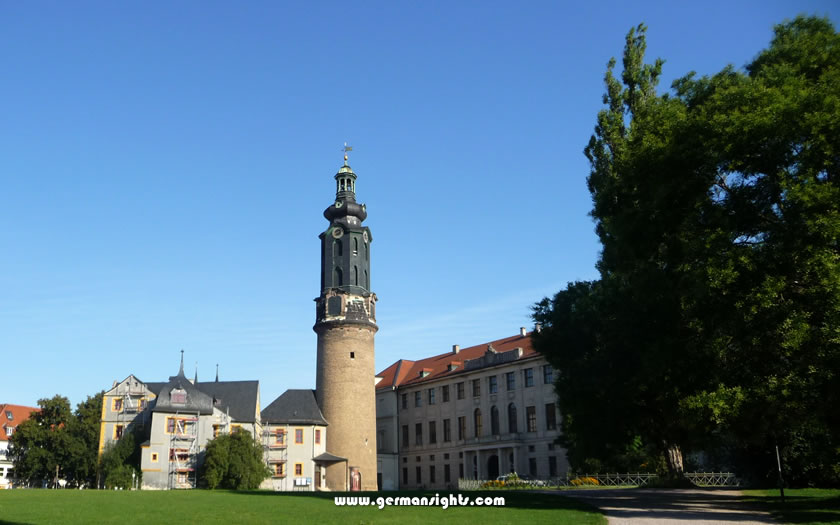 The 16th century is also when the history of Weimar starts to take off, because it became the capital of one of the many duchies caused by the split of what had been Thuringia into several different statelets.

It also became one of the centres of the Reformation - the ruler of Saxe-Weimar, as the duchy was called, was one of Luther's protectors. Martin Luther and other important figures such as the painter Lukas Cranach made the town into an important intellectual site for new religious ideas.

Later at the start of 18th century the liberal rulers engaged Bach as the organist and director of music at the court, although his stay ended with a short jail term and dismissal from his post.

One of the most important events in the history of the town was the death of Count Ernst August II in the mid-18th century. His widow Duchess Anna Amalia ruled as regent for her son Karl August and ushered in a golden era for the town - the period which later became known as Weimar Classicism.

The Arts in Weimar

As a ruler interested in the arts, Anna Amalia encouraged writers and poets to settle in the duchy and her interest was shared when her son took over the duties.

It is not an exaggeration to say that under their rule Weimar became a European centre of culture with important figures of German literature such as Goethe and Schiller settling in the town and becoming active participants in local life. 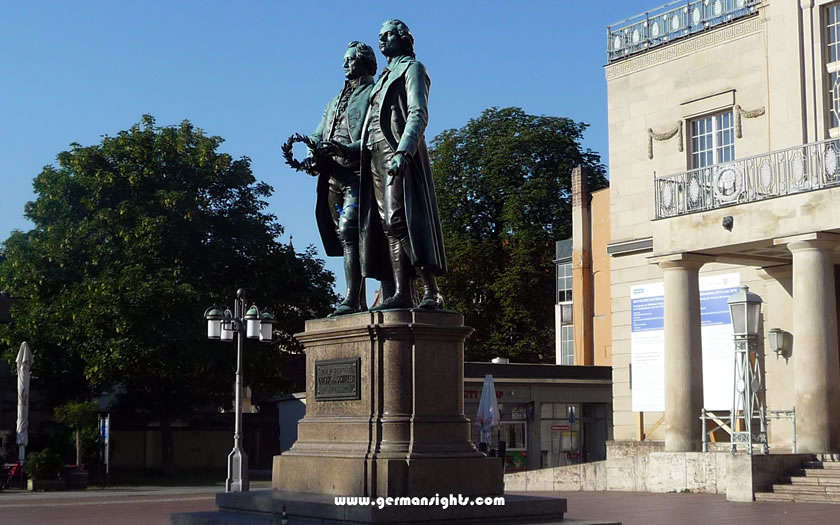 Statues of Goethe and Schiller in Weimar

Goethe was engaged (along with the German poet Wieland) as tutor/role model for the young future count but he was also the first director of the Hoftheater (the court theatre which is now the German National Theatre in Weimar). He also persuaded Schiller to move from Jena to Weimar and a number of Schiller's works were first performed in the town.

The period has been recognised by UNESCO as a part of the world heritage and a number of building connected with that period are protected, including parks, the town castle and church, and the former residences of Goethe and Schiller. UNESCO commented on "the outstanding role Weimar played as an intellectual centre of European life in the late 18th and early 19th century".

Weimar experienced a second cultural renaissance in the mid-19th century under the rulership of Grand Duchess Maria Palowna (a member of the Russian royal family). During this period, the focus was mainly (but not exclusively) on music, with Franz Liszt and Richard Wagner both being active in the town.

The Staatliche Bauhaus (School of Building) was founded by Walter Gropius in Weimar after the end of the First World War.

The aim of the art institute was to combine handicrafts with fine arts creating a 'complete' work of art.

Bauhaus became one of the most influential strands of modern architecture and Weimar is recognised as one of the birthplaces of the movement. 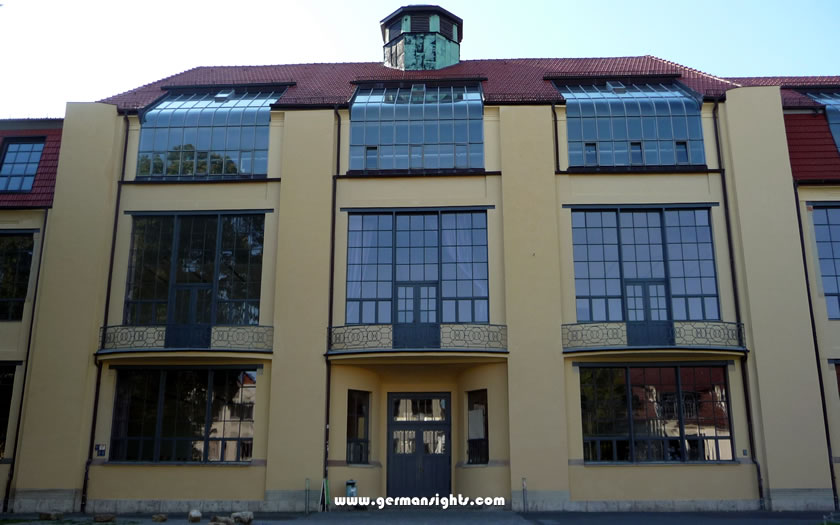 The Bauhaus University in Weimar

The Bauhaus in Weimar only had a short lifespan. It opened in 1919 as a fusion of two former schools and quickly attracted a prominent list of lecturers and teachers from the Expressionist movement (such as the artists Klee and Kandinsky).

Teaching in the Bauhaus was notable for its obligatory preliminary course discussing the principles of the movement and the practical work undertaken in crafts aimed at reuniting more high-flown artistic theory with practical talents and forms of production.

Considering its later effect on building design, the original Bauhaus did not have an architectural department - this was created in 1920.

Although many considered Bauhaus to be independent, the movement had close connections to the Social Democratic party and was funded by the state government. With the changes in political leadership during the turbulence of the Weimar Republic, the school's funding was slashed and the institution moved to Dessau.

The Bauhaus movement in Weimar is the second site in the town protected by UNESCO World Heritage designation. This covers the Bauhaus University buildings and the Haus am Horn (an early example of Bauhaus architecture).

The Weimar Tourist Office is situated in the centre of the town on Marktplatz. The office is open all week with slightly restricted hours in the winter months.
Website: www.weimar.de