Tübingen is an historic university town on the banks of the river Neckar in the Stuttgart region of southern Germany.

It is one of the youngest cities in Germany as around a third of the residents are students.

But it is also a major tourist attraction in Baden-Württemberg, with the medieval town centre with its winding streets, the castle above the town and the punt rides along the Neckar river. 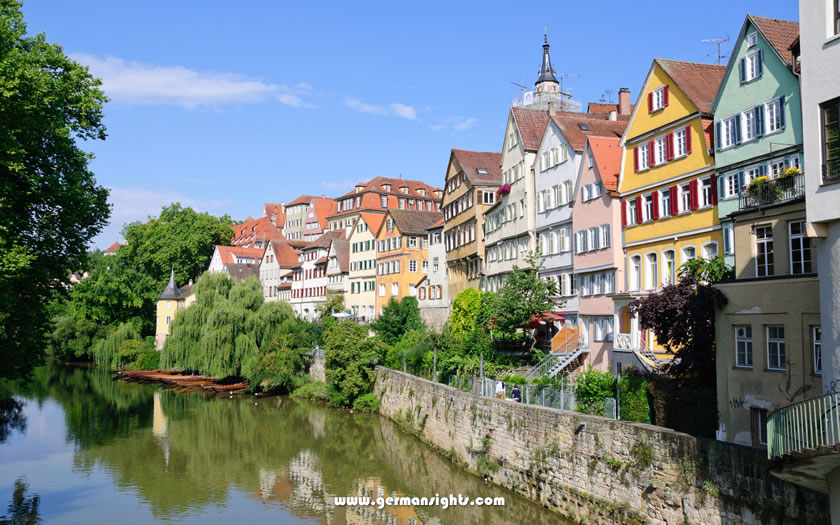 View of the historic houses along the river Neckar in Tübingen

More information about getting to Tübingen by road, public transport or air is available on our Tübingen travel page along with some options for hotel and other accommodation:
Tübingen Hotels & Travel

The popularity of the strategic position above two rivers over the centuries is shown by the numerous archaeological finds dating back to prehistoric times in the Tübingen area.

The castle, Schloss Hohentübingen, is the first written evidence of settlement in the area back in the 11th century. There are thought to have been merchants (and therefore a market) in the following century and the town charter is first mentioned in the 13th century (although the only preserved copy in the city hall is from the 14th century). 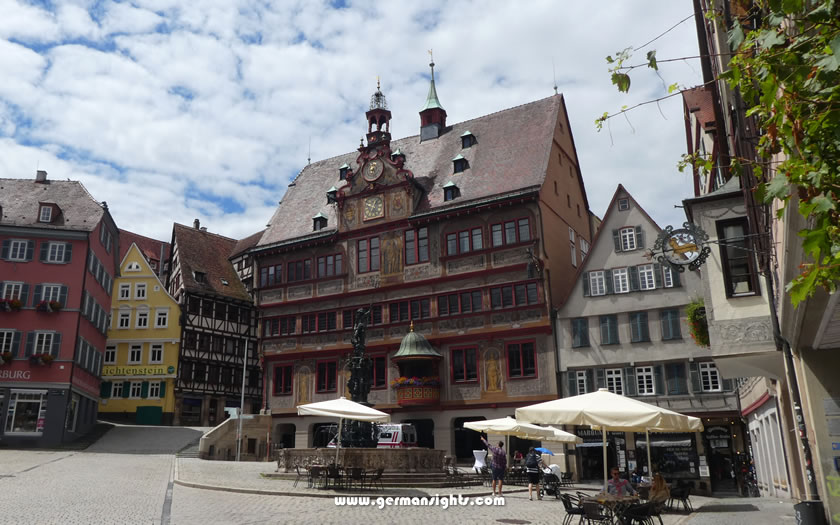 View of the town hall in the market square

The university in Tübingen has been a prestigious place to study for centuries although it has occasionally had a chequered relationship with the town, with the generally conservative student body and lecturers in the upper part of the town coming into conflict with the more radical workers in the poorer areas in the lower town.

Like many other towns in Germany, Tübingen suffered greatly during the era of the Thirty Years' War and the religious conflicts, with bouts of plague and great fires laying waste to the population and the infrastructure.

Although much of the town retains its charm from the medieval era - for example, the stunning Marktplatz square with the town hall - the city only really started to increase in size in the days of the Kingdom of Württemberg at the beginning of the 19th century.

But Tübingen was never a major centre for industry or engineering, which meant that it was not a target during later wars and that the medieval core of the city remained intact.

Although it is renowned for the sense of history in the tight alleys and rows of timber-framed houses, Tübingen remains a lively young city with its large student population and it makes a good base to explore the Stuttgart area.

The Tubingen tourist office is located next to the main bridge over the Neckar river and opposite the Neckar island with its views of the old town on the other river bank. It is open Mondays to Saturdays all year round and on Sundays in the summer months.

The tourist office offers a leaflet for a self-guided walking tour which takes around an hour and leads from the Neckar island past sights such as the Hölderlin tower and the castle through to the market place and the various historic churches at Tubingen's heart.
Tourist Office: www.tuebingen-info.de