Ruhpolding is a small town in the Bavarian Alps which is well-known for its winter sports and Olympic biathlon training centre.

The sprawling settlement of just under 7,000 is located in a wide bowl in the Miesenbach valley along the Weisse Traun river.

It is one of the final settlements on the German Alpine Road (when driving the more usual west-east direction) between Reit im Winkl and Berchtesgaden. 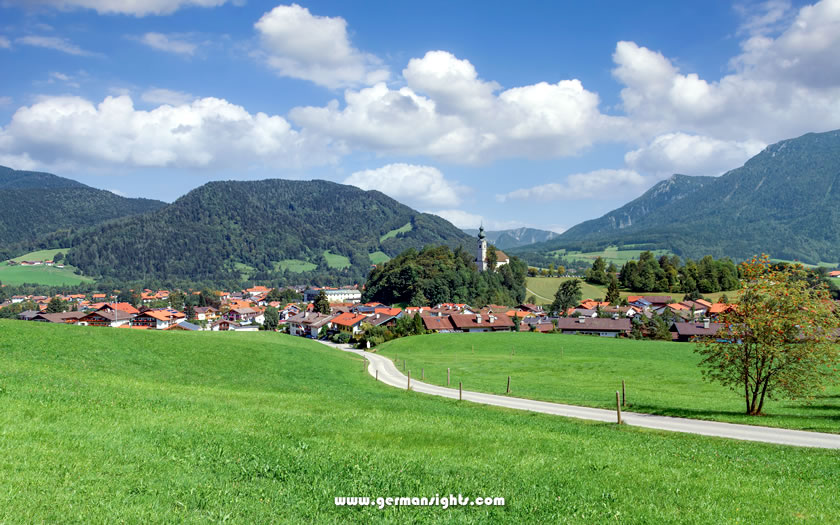 A view across Ruhpolding and the valley

As a popular 'Kur' and outdoors activity destination the town has a good range of accommodation. More details about getting there and where to stay are available on the travel page:
Ruhpolding Hotels & Travel

There are different theories as to how the name Ruhpolding came about. Some say that it comes from the ancient Bavarian meaning 'the place where the people of renowned strength are' while the local tourist office thinks that it is more likely to have emerged from 'the people of Ruhpold'.

In any case, more permanent settlement in this somewhat isolated valley took place in the 9th and 10th centuries and at this time the area was came under control of the prince-bishops who ruled in Salzburg. 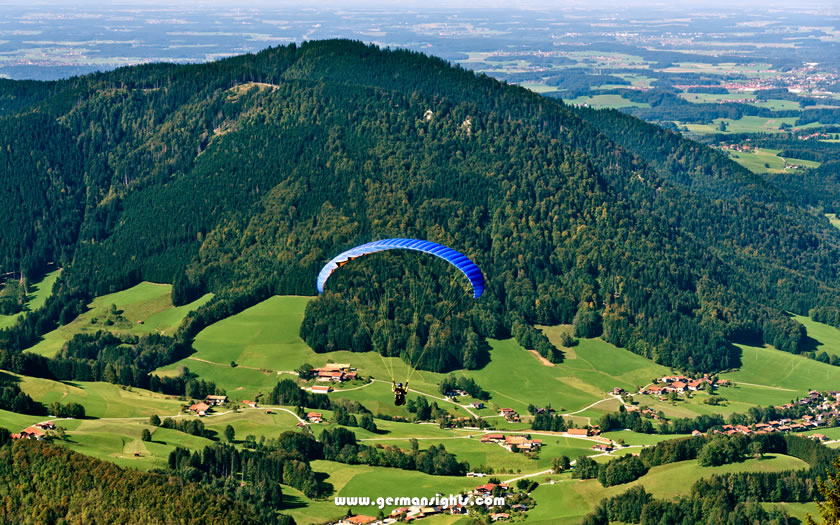 Paragliding from the Unterberg near Ruhpolding

The area was known for mining, mostly zinc and lead ores, but in the 15th century there is evidence that marble quarried from the area was used in the church on the island of Frauenchiemsee.

The rulers of region also liked to use the woods and mountains as a hunting preserve, although in the 17th century much of the woodland was cleared to serve the needs of the salt production at Traunstein.

The distinctive church on the hill above the town - the parish church of St Georg - was founded in the 18th century.

The town was connected to the rail network at the end of the 19th century and the era of tourism opened. By the 1930s the first rail charters were delivering people to the local guesthouses and hotels - in this era, the first spa building was opened.

Like many small alpine resorts, it concentrates on outdoor activities and 'healthy tourism' in the summer and winter seasons.

Although these days the town does have access to a limited amount of downhill skiing, it is far better known as a Nordic winter sports centre. It plays host to an Olympic training centre for biathletes and regularly hosts world cup and world championship events.

The tourist office is located near the Kurpark and the railway station. It is open Monday-Saturday and Sunday morning in season and closed on Saturday afternoon (and Sundays in November) in off season:
Website: www.ruhpolding.de