Regensburg is another of Bavaria's historic cities protected by the UNESCO World Heritage listing.

The protected area wit its medieval architecture is the heart of the city and it is considered to be the best-preserved city centre from the Middle Ages on the northern side of the Alps.

In those days it was a centre for culture and also for trade on the River Danube which runs through the centre of the city. 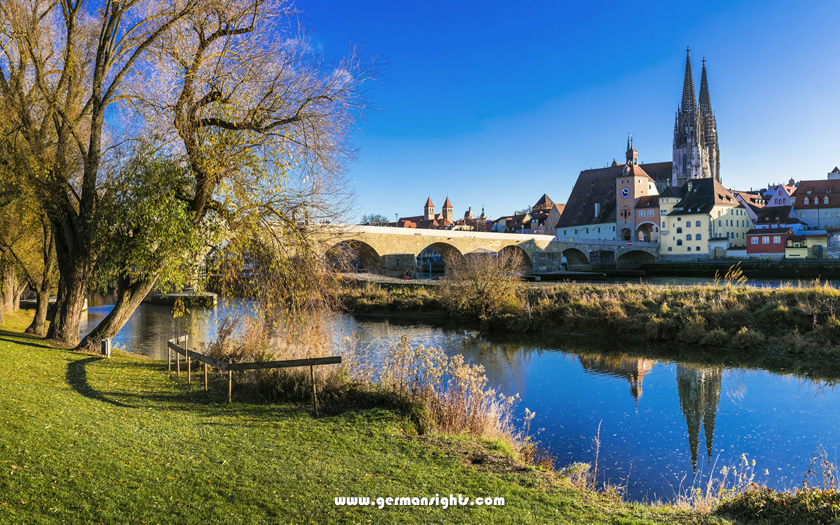 A view of Regensburg and the Danube river

As one of Germany's oldest towns, Regensburg is one of the most popular tourist destinations in Germany and can boast a wide range of hotel and other accommodation. Transport information and hotel details are located on our travel page:
Regensburg Hotels & Travel

Like so many towns steeped in history, Regensburg was originally built on an important strategic site.

Settlers had lived here since prehistoric times, but it was the Romans who saw the importance of the Danube river and the places where it could be crossed.

The Danube itself was a trade artery from east to west, while the ford here at the northernmost point of the river meant that traders travelling into their territory would be funneled through the settlement. 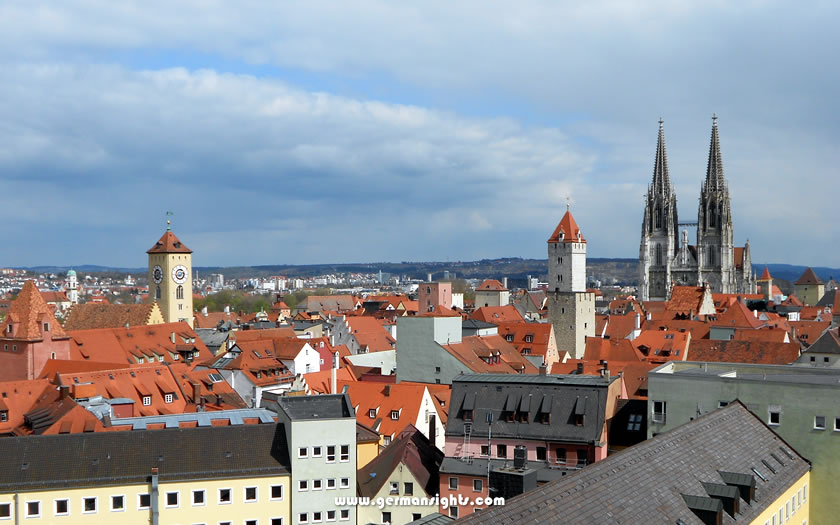 The rooftops of Regensburg and the cathedral spires

Regensburg was known by the Romans as Castra Regina. They had originally fortified a hill to the south of the river but Castra Regina was designed to be the headquarters of a Roman legion, built in stone and right on the banks of the Danube.

Following the fall of the Roman Empire, Regensburg was ruled by Bavarian counts and then became part of the Frankish empire under Charlemagne. When that empire split into two, Regensburg was the natural capital for the eastern Franks.

This prestigious position as an Imperial centre and the crucial location on major trade routes helped the city expand along the Danube and made some of its inhabitants extremely rich. The Stone Bridge across the Danube (see lower) encouraged trade between northern Europe and Venice to reach new heights and Regensburg became a Free Imperial City in the mid-13th century.

This status showcased the growing power of the merchants versus the nobility and bishops and also led to some of the most important medieval building projects which still stand in the old town, such as the Cathedral of St Peter and the Old Town Hall.

The merchant classes had however taken on a powerful opponent in the Bavarian dukes, who controlled the surrounding territory. Eventually they managed to bring the city to such a state that it voluntarily handed its hard-won freedom to Bavaria.

The Thirty Years' War and bouts of plague affected Regensburg as with any other central European location - it lost one in five of its population in one major outbreak - but the city recovered quickly due to the Perpetual Diet being held in Regensburg.

The Imperial Diet was the name given to a meeting of princes, electors and city representatives which functioned as an assembly in the Holy Roman Empire. At this time, the Holy Roman Emperor was obliged to follow the decisions of the Diet and his only power was not to call it into session.

Thus the Perpetual Diet, which never finished its session and lasted from the mid-17th century through to the beginning of the 19th century, became in essence the first German government.

The dissolution of the Empire and the loss of power and prestige to Munich meant that Regensburg became something of a backwater. It survived the Second World War with little damage and has boomed in the late 20th and early 21st centuries. Nowadays it is the fourth largest city in Bavaria (after Munich, Nuremberg and Augsburg) and is the capital of the Upper Palatinate region of the state.

Since 2006 the old town of Regensburg has been listed as part of the UNESCO World Cultural Heritage. Nearly 1000 buildings are protected by the UNESCO listing.

The Stone Bridge, which links the old town of Regensburg across various islands to the other bank of the River Danube, is one of the symbols of Regensburg.

This is hardly surprising as it is the oldest surviving bridge in Germany - having been constructed way back in the 12th century.

The bridge was not only important for linking the two sides of the river but for its function as a permanent trade crossing of the Danube even in times of flood and ice. 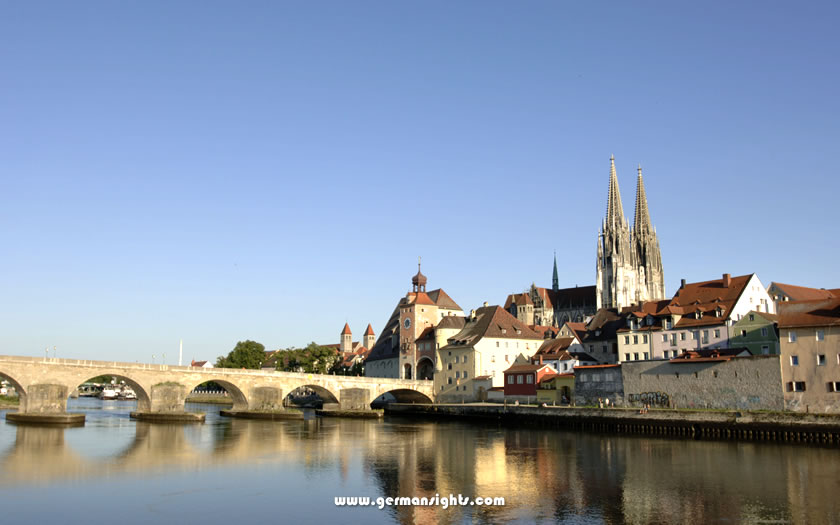 The Stone Bridge in Regensburg

The uneven pillars and arches were constructed on foundations of wood, which were then protected against debris and ice by large oval bulwarks. These in turn cause a strong current to run between the pillars which was used by watermills which in turn contributed towards the costs of bridge upkeep.

The bridge is now closed to traffic and has undergone extensive renovation to deal with the damage of centuries of traffic. There is also very little river traffic that now passes under the bridge. Because of the strong currents mentioned previously, a canal was constructed on the flood plains of the river to the north which is now used by the regular Danube shipping. Private boats and smaller excursion boats can still use the passage under the bridge.

One of the favourite stopping points after a morning spent traipsing around the city sights is at the Historic Sausage Kitchen near the Stone Bridge.

It stands on the spot where, from the 12th century onwards, a similar stand fed the dockworkers who served the regular shipping traffic on the Danube. In those days the fast food was boiled meat.

The current building dates from the 17th century and has, since the 1800s, served homemade sausages cooked on a charcoal grill. 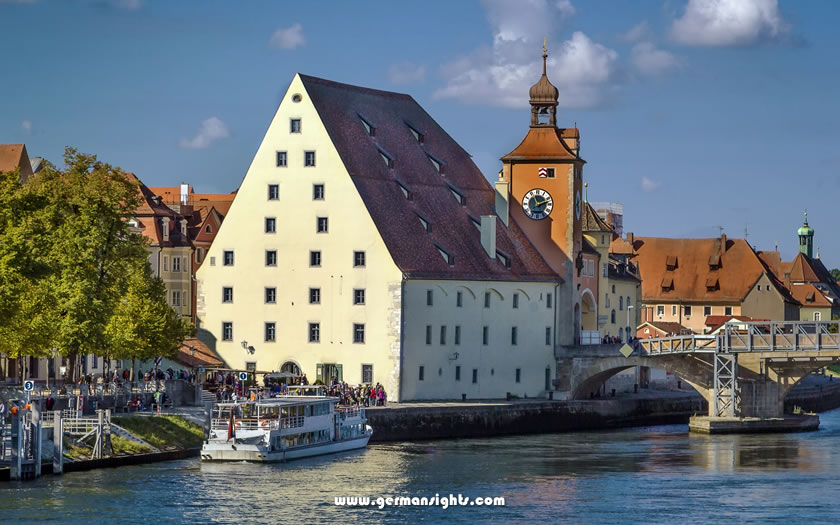 Boat moored next to the Regensburg Sausage Kitchen and Salzstadl

The traditional way to eat these sausages is the slightly saucy "Sechs auf Kraut" ('six on a plate with sauerkraut'). Those with a greater hunger or not wishing to be misunderstood can order eight or ten.
Website: www.wurstkuchl.de

The other great Regensburg sausage heritage is the 'Knackersemmel' - again a grilled sausage - but this time larger - cut in half lengthways and served in a crunchy roll with traditional sweet mustard, horseradish and gherkin slices.

It originated at the first Christmas market held after the Second World War. Descendants of the sausage stand owners who introduced it can still be found in the Neupfarrplatz in the old town from Monday to Saturday.
Website: www.wurstbraterei-reisinger.de

The tourist office is located in the pedestrian area at the heart of Regensburg's old town in the former town hall. It is open all year round - apart from Christmas Day and New Year's Day - with slightly restricted opening hours on Sundays in winter.
Website: tourismus.regensburg.de