Mainau is a small island in the western part of Lake Constance in southern Germany. It is famous for its display of flowers and trees in the botanical gardens on the grounds.

It is close to the town of Konstanz, but is also frequently reached by means of the ferry services around Lake Constance.

Mainau boasts more than a million visitors a year to the private gardens (mostly in summer), which are run by a company (Mainau GmbH) owned by the charitable Count Lennart Bernadotte Foundation. 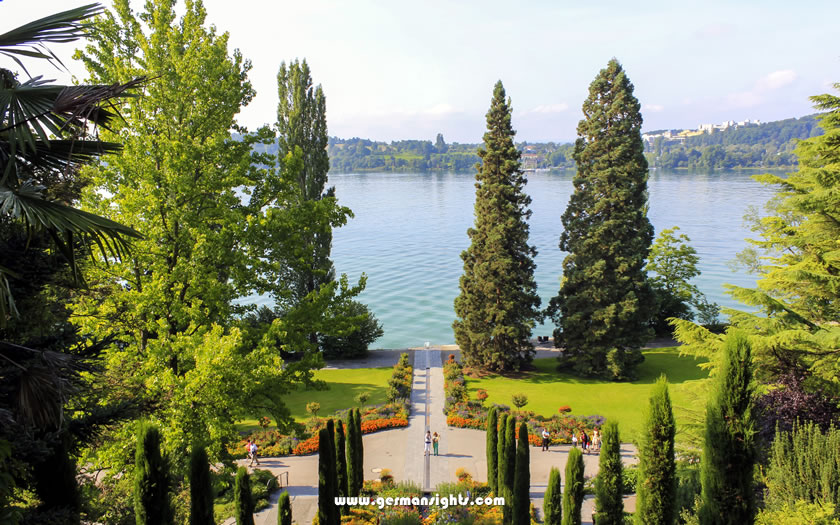 Mainau island in the German part of Lake Constance

Visiting the 'Flower Island' of Mainau

Mainau is part of the Konstanz council area and is a stop on the local bus service which runs from the railway station. The journey is around 15 minutes from the old town of Konstanz and drops people near the large car park near the visitors' centre before the short causeway onto the island.

Entrance tickets for both groups and individuals (different ticket offices) can be bought from booths before the turnstiles and ticket check. Just before the causeway visitors will pass the Schwedenkreuz crucifix in the lake. (Legend has it that Swedish occupiers during the Thirty Years' War tried to plunder the bronze crucifix but were forced to drop it here because it was too heavy!)

Those arriving by ferry from Meersburg, Unteruhldingen or Konstanz will be arriving at the jetty just under the castle residence on the lake side of the island. Again there are ticket booths available before the turnstiles.

The botanical gardens are open year-round from sunrise until sunset - specific times for each day are posted on the Mainau Island website. Entrance prices are substantially cheaper in the more unpopular winter months (where of course there will be fewer flowers on display) between November and mid-March. There is no charge for children up to and including 12 years of age.

There are various walks around the perimeter of the island with regular themed displays of flowers, trees and other plants. Towards the lake side of the island there is a small hill where the residence (a former castle) is located along with the Palm House and the Italian Rose Gardens.

The Butterfly House, the second largest in Germany, is siutated further round the island to the north.

Depending on the level of interest in botanical matters, visitors should plan on spending at least half a day visiting the island. There are various forms of refreshment available on the island, from a beer garden through to restaurant dining.
Website: www.mainau.de

The History of Mainau

The island of Mainau is just a short distance away from the UNESCO-listed pile lake dwellings at Unteruhldingen and it is likely that people lived in a similar fashion on its shores. Traces of settlement on the southern part of the island have been found which date back to 3000 BC.

The Romans under Emperor Tiberias built a base for a fleet of ships here to exercise their control over Lake Constance.

The island was granted to the Teutonic Order in the 13th century and they ruled over the island for the next 500 years. 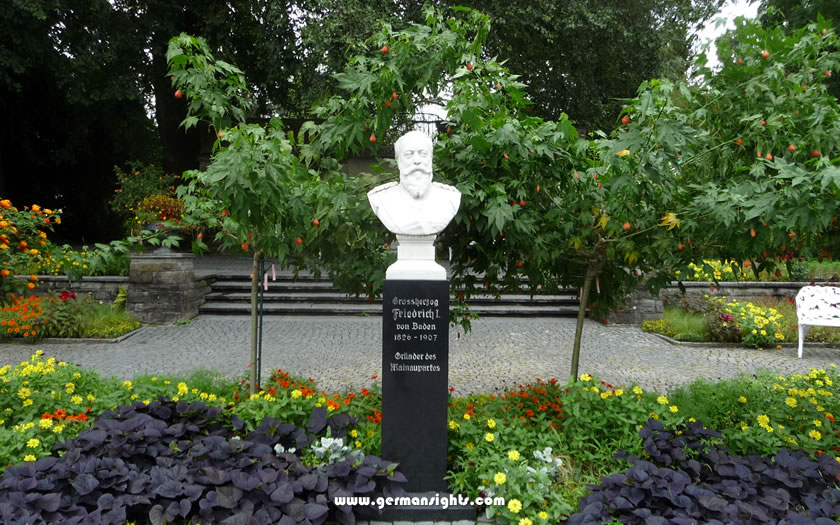 The gardens on Mainau island

The castle and church date back to their control over Mainau, with the castle being finished in 1746. As part of the secularisation in the Napoleonic era, the Teutonic Order was dissolved and the castle and grounds reverted to the newly-created Grand Duchy of Baden in 1806.

It was sold on to various buyers in the next decades but eventually reverted to the rulers of Baden and the man who is considered the founder of the botanical gardens: Grand Duke Frederick I. He not only established his summer residence here, but also began to redesign it and to settle rare exotic trees and plants, which he brought back from his travels. The Arboretum, the Italian Rose Garden, the Orangery and the first iron bridge to the mainland date from this period.

The island passed into the hands of the Swedish royal family through inheritance and then to the Bernadotte family (who had been forced to renounce royal claims because of a marriage to a commoner).

The development into the 'flower island' of Mainau really flourished in the 1950s. Much of the island is now under a protection order as a place of significant cultural value and it is run by a charitable foundation established by the family.