The Chiemsee is the largest lake in Bavaria and is a popular destination for a day trip and for longer stays.

As well as the lovely scenery, with the mountains to the south, the lake has two attractive islands which can be reached by boat trip and a number of different villages to explore.

It is also one of the stages on the German Alpine Road tourist route. Bernau am Chiemsee is the most commonly mentioned if driving the route straight through but those who are planning to make a stop might want to make the short drive north to Prien on the lake shore. 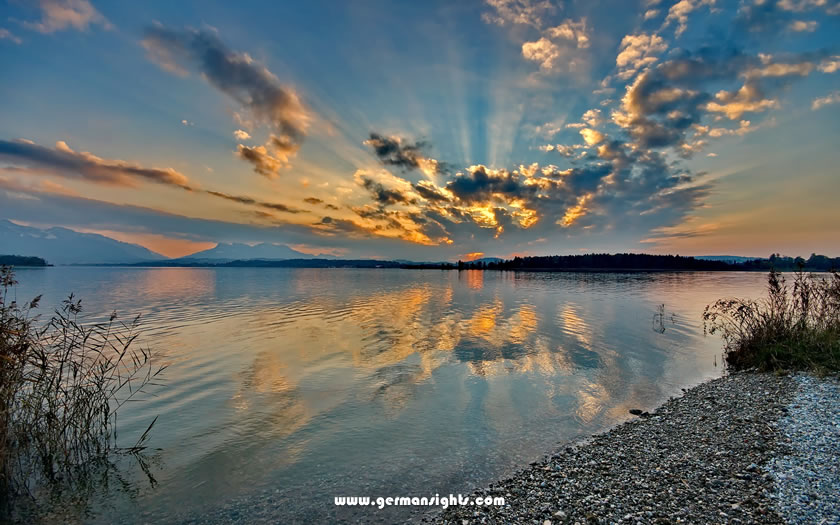 Yachts on the Chiemsee with the Alps in the background

There are a number of resorts around the lake and a good choice of hotel and other forms of accommodation. More details about what is available and directions on how to get to the Chiemsee can be seen on our travel page:
Chiemsee Hotels & Travel

Prien am Chiemsee is the largest of the villages on the Chiemsee with a population of around 10,000. Back in the 19th century it was only a tiny village but the advent of the rail link from Munich and the opening of Herrenchiemsee Castle to the public in the later half of the 1800s meant that it became a popular destination for visitors.

The flood of tourists who descended on the village meant that the connections between the settlement and the lakeshore - until now carried out in horse and cart - became completely inadequate.

The "Chiemsee Bockerl" - the steam train between Prien and its harbour at Stock - was finished in 1887 and is still one of the main ways for visitors to reach the lake. 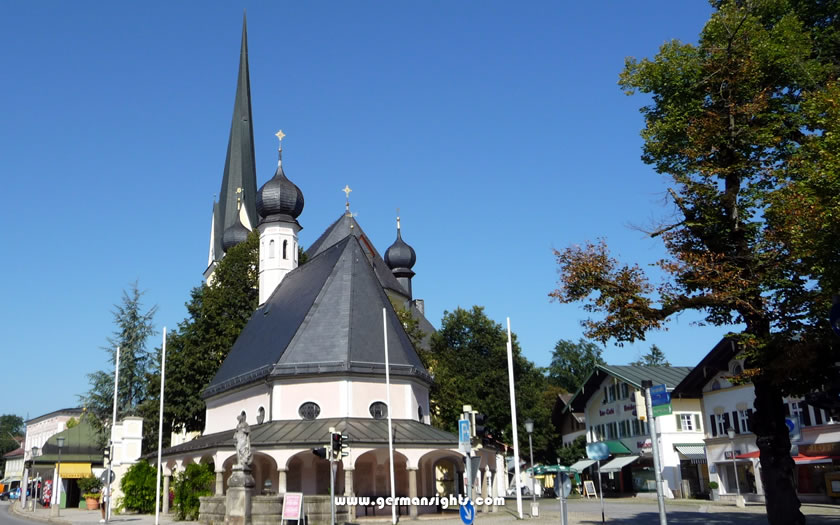 The parish church and market square in Prien am Chiemsee

The central square of the town features the parish church of Maria Himmelfahrt, built in the early 18th century. The small chapel in front of it is the Arme Seelen Kapelle (Chapel of the Poor Souls), dating from the 16th century.

Seebruck is situated on the northern shore of the Chiemsee and has a population of just over 1500 inhabitants. It was originally a stop on the Roman trade route between Augsburg and Salzburg.

The view of Seebruck from an approaching ferry features the masts of many yachts and the yacht harbour in the village is one of the largest in Bavaria.

Chieming is located on the eastern shore of the Chiemsee and is a small town of just over 4500 inhabitants. It is named - like the lake and the region - after the legend of an old Bavarian noble Chiemo who is supposed to have lived in this area.

It dates however back further than Chiemo, showing traces of Roman and Celtic settlement. Nowadays it is the second largest resort on the lake after Prien on the opposite western shore.

Bernau is the third most popular village for visitors to the Chiemsee and is situated on the southwestern corner of the Chiemsee near the motorway between Salzburg and Munich.

The town of 6500 inhabitants is set back from the lake and access to the shore and ferry service is actually via the hamlet of Felden on the other side of the motorway.

Bernau is a stage on the German Alpine Road route between Oberaudorf and Reit im Winkl.

The Fraueninsel, or Frauenchiemsee as it is sometimes called, is the second largest island in the lake.

The name ('Frauen' meaning 'ladies') probably refers to the Benedictine convent which was established on the island in the 8th century (the oldest convent in Germany).

The convent is a place of pilgrimage to the remains of St Irmgard, who died at here in the 9th century. She was the daughter of one of the Bavarian Kings and the abbess of the convent. 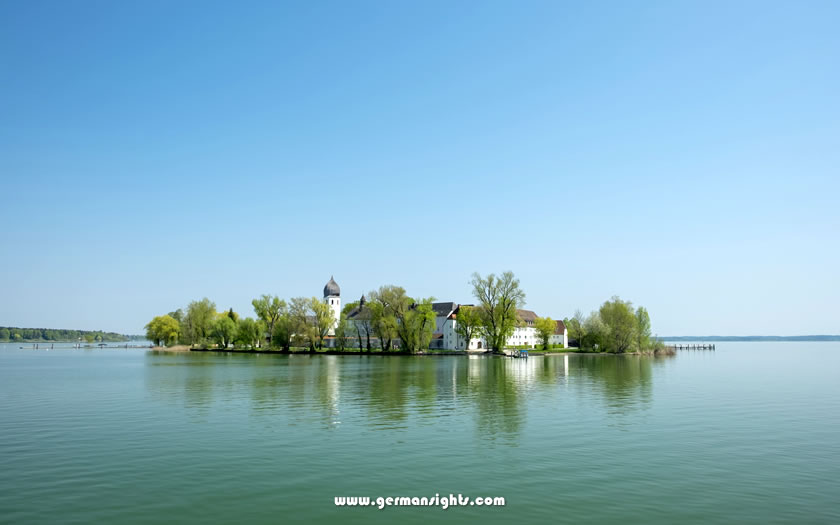 The Fraueninsel in Lake Chiemsee

The island has a peaceful and atmospheric setting and is (and was) a popular location for artists. It has a permanent population of around 300 inhabitants.