Kelheim is a small town located at the eastern end of the Altmühltal Nature Park. Habitation in this important strategic area can be traced back to beyond the Bronze Age.

The town itself has a small but attractive historic centre which is overlooked by the large Befreiungshalle ('Liberation Hall') monument on the Michelsberg hill above the town.

It is also the location where the Danube river proper meets the linking Main-Danube canal and boat trips up the Danube to the historic Weltenburg Abbey are popular with visitors. 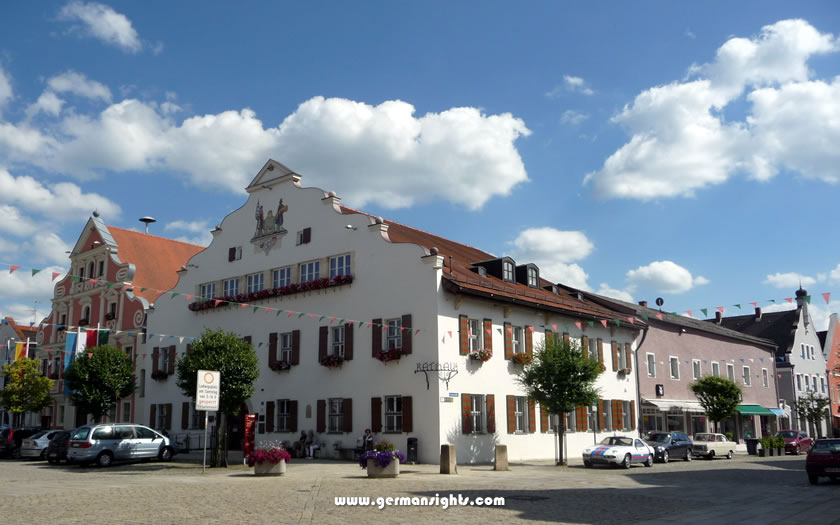 The town hall in the historic centre of Kelheim

More information about the different options for getting to the town is available on our Kelheim travel page along with some options for accommodation:
Kelheim Hotels & Travel

Archaeological digs in the area can trace settlements back to the Stone Age and there have been Bronze Age finds within the current town limits.

The Celts also had a settlement on the Michelsberg hill where the Liberation Hall now stands while Roman remains have also been discovered.

The first documented mention of Kelheim came in the 9th century, however. The town passed into the hands of the Wittelsbach dynasty two centuries later and the ruling family built one of their residences here.

One of the reasons that it was favoured was that the Danube could be crossed by bridge here. The river trade turned Kelheim into a prosperous town and the town walls were built in the 13th century.

Like many Bavarian towns, it underwent periodic hardship through the wars of the Reformation and Counter-Reformation and, as road and eventually rail traffic became more important, the town became something of a backwater. 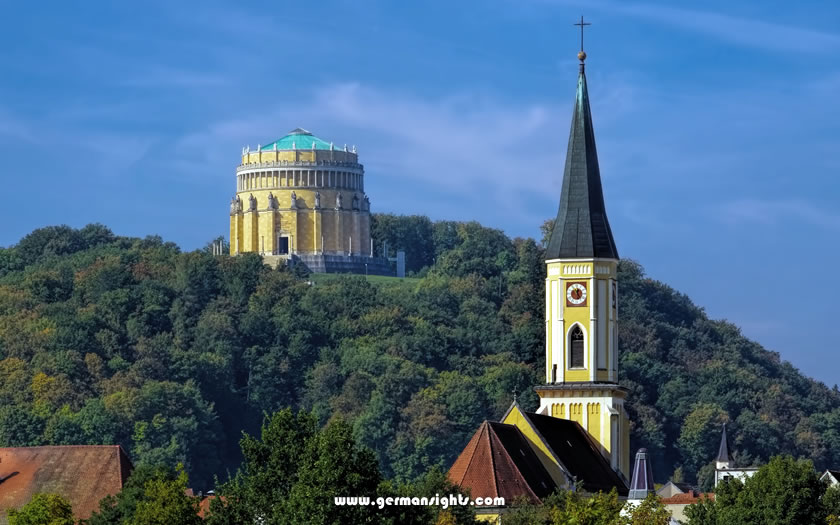 The Liberation Hall monument above Kelheim

The striking Liberation Hall monument on the Michelsberg above the town was created in the mid-1800s and is a memorial to the victory over Napoleon at the beginning of the century (and equally a propaganda call for unity amongst the German states).

At around the same time the original canal linking the Main to the Danube was built. This was an important trade link between northern and southeastern Europe. The current Main-Danube canal dates from the 1970s.

The Kelheim tourist office is located in the central square of the pedestrian area and offers a small leaflet detailing a walk around the town.
Tourist Office: www.kelheim.de (English and German)

Weltenburg Abbey and the Donaudurchbruch

Many visitors to Kelheim travel the short distance on the regular boat service through the Danube narrows to Weltenburg Abbey.

The Abbey is claimed to be the oldest in Germany and was originally founded by the Celtic missionaries who spread Christianity in this area in the 7th century.

The abbey also runs a famous brewery - dating from 1050 and claimed to be the oldest monastery brewery in the world. (The Weihenstephan brewery near Freising would argue strongly about this claim!) The dark beer produced by the abbey has won various awards. 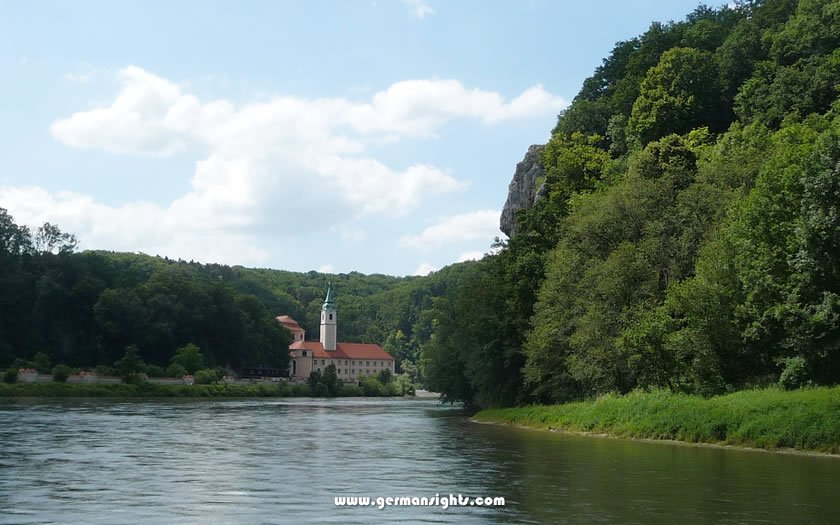 The journey up to the Abbey follows the Danube through a wide gorge, known in German as the Donaudurchbruch ('the Danube breakthrough'). The term implies that the erosion caused by the Danube eventually ate away the rock and created a new channel, which is not exactly correct in geological terms.

However, the original channel of the Danube was via the Altmühl until the water found an easier way through in its present route because of later Ice Ages. The river journey passes rock formations and beaches along the way. It is also possible to hike on a 12km round trip through the woods to Weltenburg on both sides of the river.