Nuremberg is the second largest city in Bavaria after Munich and is at #14 for the biggest German city overall.

It has a population of more than half a million in the city administrative area alone and the metropolitan region, which includes the neighbouring towns of Fürth, Schwabach and Erlangen, increases the number of inhabitants to 3.5 million.

Despite the size of the city, Nuremberg really is one of the 'must-see' destinations in the southern part of Germany. It has bucketloads of history and culture and boasts its own famous culinary specialities and events, such as the famous Nuremberg Christmas Market. 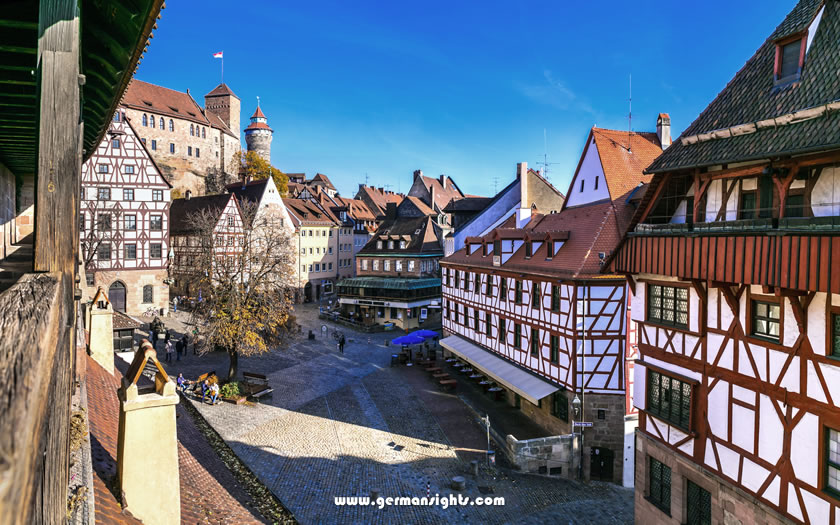 View of the old town in Nuremberg

Nuremberg - Try These Things To Do

Nuremberg is not only popular as a tourist destination but is also a thriving economic centre and, as such, can boast a wide range of accommodation. Transport information and hotel details are located on our travel page:
Nuremberg Hotels & Travel

Our Places To See page offers a series of shots of the city with short descriptions:
Nuremberg Sights

Our culinary specialities page will give you a little bit more information about some of the Franconian delights to be found in the city:
Food & Drink in Nuremberg

In English, the proper spelling of the town is Nuremberg, with two 'e's (although Nuremburg is a very common error). In German, the town is known as Nürnberg and the endings of the name can change when it is used as a location description (for example, 'Nürnberger Bratwurst' when talking about the local Nuremberg sausages).

A Brief History of Nuremberg

Nuremberg has enough dark episides in its history that it is something of a relief to be able to start with a romantic legend from the early days.

The first actual mention of Nuremberg (or Norenberc, as it was written then) was in 1050 when a noble Richolf petitioned for the freedom for a serf named Sigena. It is thought that the petition was in order to marry and to legitimise their children and the line of succession. The date of the petition, July 16, is considered the city birthday.

To be more realistic, there is evidence of settlement going back before that time, with archaeological finds from the 9th century. Although there were probably people living in the general area, the specific location of where the city now stands was unsuitable because of the potential of flooding from the Pegnitz river and the fact that the open sandy ground was hard to farm on.

Nonetheless, the hill where Nuremberg Castle now stands was a good defensive site and it seems that there were a number of inhabitants clustered around early fortifications by the middle of the 11th century, which was when the town received the right to hold a market, the right to mint its own coins and the right to levy tolls on goods passing through the area.

These were all major steps for a settlement to achieve on the way to economic growth in the Middle Ages and, by the middle of the 11th century, Nuremberg had grown important enough to host an Imperial Palace (a 'Kaiserpfalz'). These were stops along the way for the Holy Roman Emperor, who had no territory which he could call his own.

Even though there was no imperial capital, Nuremberg had a good argument to be the unofficial centre of the Empire, with the Imperial Diets (the 'parliaments' of the time) being frequently held there. In fact, an edict issued in the 14th century decreed that every Emperor must hold his first Imperial Diet in Nuremberg.

Economically, Nuremberg also had another advantage in that it stood at the crossroads of a number of international trade routes and, of course, the Imperial importance attached to the city meant that many traders and buyers used it as a marketplace.

The boom in population and economy also attracted artists and sculptors looking for patrons - Albrecht Dürer was perhaps the most famous of many renowned names who made their base in the city during the 15th and 16th centuries.

Albrecht Dürer, the most important of German painters, helped change the way that artists looked at portraiture and landscape and ushered in the era of the Renaissance.

Dürer was born in the 15th century to a Hungarian goldsmith who had emigrated to Nuremberg. At first he apprenticed to his father in the same trade, but later his artistic talent led to him learning from the most famous artist in Nuremberg at that time.

Having finished his apprenticeshop, Dürer took off on the first of his travels - something he was to do repeatedly during his life. On his return, he married to the daughter of another Nuremberg craftsman and his new status as husband allowed him to set up in business for himself.

Many of Dürer's most famous works come from the time at the beginning of the 16th century when he lived in Nuremberg at the foot of the castle. The house where he lived dates from 1420 and is a typical timber-framed structure which would have been used by a prosperous inhabitant from those days.

It has been used as a museum of his life and work since the 19th century and contains exhibitions of printing and artistic techniques from his era as well as historical copies of some of his best-known works. The museum is open all week in high summer and during the Christmas market - otherwise it is closed on Mondays.
Website: museums.nuernberg.de

In its time of prosperity, Nuremberg had become quite a large 'city-state' but the later stages of the Middles Ages with its succession of wars in central Europe and the changes in trade routes over the years meant that the city's territory gradually shrunk and that balance sheet deteriorated.

By the time of the Napoleonic Wars, Nuremberg was in desperate financial straits and asked to be incorporated into Prussia. That never happened, but it did finally join Bavaria as part of the Confederation of the Rhine alliance in 1806, with Bavaria agreeing to accept the debts of Nuremberg.

Freed from the weight of the debt and liberated by the end of the campaigns by and against Napoleon, Nuremberg started its slow climb into the industrial era.

Germany's first train ran between Nuremberg and the nearby town of Fürth and major manufacturers such as Siemens, AEG and Staedler turned the city into an economic centre for northern Bavaria. At the same time it was rediscovered by romantics looking for an idealised German past and finding it in the history of the ancient buildings and events.

This view of Nuremberg as a representative of 'lost Germanic greatness' was something that was shared by the the Nazi Party, who rose to power in the 1930s.

Nuremberg and the Nazi Party

For a city that is so closely associated with the Nazi atrocities of the 20th century, Nuremberg has actually always had a reputation as a 'red' workers' centre.

Nonetheless, some of the most famous features of National Socialism were closely connected to Nuremberg:

Nuremberg had been attractive to the extreme right because of its romantic association with German pre-eminence and culture in the Middle Ages. Rallies by the National Socialists started as relatively small events and were held in the city because it was reasonably accessible from all over Germany and because the Nazis had a strong foothold in the region around Nuremberg.

Once Hitler had come to power, Nuremberg became known as the "City of Nazi Party Rallies" ("Stadt der Reichsparteitage") and played host to hundreds of thousands of participants and spectators in annual propaganda events designed to display fanatical support for decisions already made by the leaders.

The rallies were held out Luitpoldhain area to the southeast of Nuremberg. This had been a park area with lakes but it was remodelled with grandiose architectural plans which were never completed. Photos of the military parades and spectators from that time are frequently from the Luitpoldhain parade area, which was demolished after the war.

What remains from the wartime are the Kongresshalle - designed at the time to be the largest stadium in the world - and the Zeppelin Field with its viewing galleries, which was also used for formation marching and other events during the Rallies. The Max Morlock stadium - home of the famous traditional football club 1. FC Nürnberg - stands on the original structure, which was used for Hitler Youth events.

One wing of the Kongresshalle is now given over to the 'Dokumentationszentrum Reichsparteitagsgelände' ('Documentation Centre Nazi Party Parade Grounds'). The centre has a permanent exhibition entitled "Fascination and Terror", which details the rise to power of the NSDAP and the role which the Nuremberg Rallies played in this.

The Documentation Centre is open every day, with slightly restricted hours at the weekend.
Website: museums.nuernberg.de

The proclamations which became known as the Nuremberg Race Laws were first announced at the Nuremberg rally in 1935. The laws removed German citizenship from German Jews and forbade marriages or sexual relations between Jews and "Germans or those of related blood".

The laws were the first time that the racial theories of the Nazis were institutionalised and, following the Olympic Games in 1936, led to further and more oppressive measures before the establishment of the extermination and forced labour camps.

The laws were based not on religion but on race, so a persons 'eligibility' to remain a German was based on degrees of family relationships.

The Nuremburg Trials is the name given to the tribunals held to prosecute high-ranking Nazi war criminals following the end of the World War II. Nuremberg was chosen as a venue for practical reasons, as the Palace of Justice in the city was undamaged and large enough to hold the proceedings, and for symbolic reasons, given the prominence of the city in Nazi ideology and propaganda.

Twenty-four of the leading members of government, industrialists, Nazi Party leaders and military officers were prosecuted for war crimes in the main trial, which started in 1946 at the end of World War II. Two committed suicide, some were acquitted and 12 were sentenced to death.

This International Military Tribunal was followed by 12 other trials presided over by the occupying American military. Just under 1,700 defendants were prosecuted with around 1400 being found guilty and less than 200 being sentenced to death.

The Palace of Justice now houses a museum dedicated to the Nuremberg trials. The Memorium Nürnberger Prozesse ('Nuremberg Trials Memorial') is located on the top floor of the courthouse. Courtroom 600, where the trials actually took place, can be visited when it is not in use as it is still a functioning courtroom. The Palace of Justice is located west of the city centre and is near the Bärenschanze underground stop on the U1 line.
Website: museums.nuernberg.de

Nuremberg had suffered heavily from bombing raids and from fighting at the end of the Second World War. Much of the historic town centre had been destroyed and there was a debate about how to rebuild the city.

Eventually many, though not all, of the historic buildings were reconstructed and inhabitants flocked to the city as the 'Wirtschaftwunder' ('business boom') took hold. Jobs available rose by 50% from the Fifties to the Sixties and the city continued to expand, helped by major infrastructure investments such as the airport and the underground rail system.

Nuremberg has two main tourist information offices. The first is just over the road from the railway station on the way into the old town and the second tourist information centre is on Nuremberg's Market Square. They are both open all week, with slightly restricted hours on Sundays.
Website: tourismus.nuernberg.de