Wartburg Castle is one of the most significant buildings in German history with an almost mythological connection to various significant events which have shaped the country.

"What a host of memories this name evokes for every German..." wrote the architect charged with the restoration of the building in the 19th century.

Catalyst for the Protestant Reformation Martin Luther, poet and writer Johann Wolfgang von Goethe and the start of the push for the creation of Germany in the 19th century are all linked to the castle. No wonder that the Wartburg fortifications have been listed as a World Heritage Site by UNESCO. 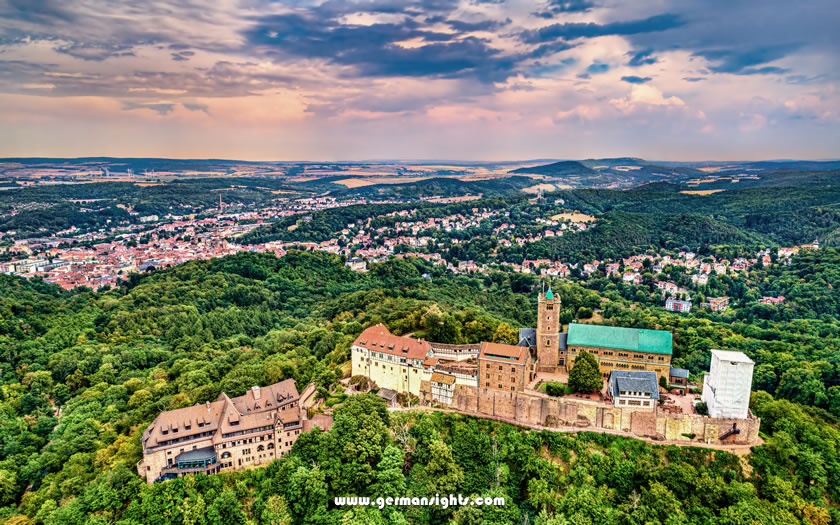 Wartburg castle above Eisenach in Thuringia

Where is Wartburg Castle located in Germany?

Wartburg Castle is situated just outside the town of Eisenach in the German state of Thuringia.

When was Wartburg Castle built?

The medieval castle was built around 1067 and was first mentioned in a document in 1080.

Wartburg Castle was built by Count Louis of Schauenburg (also known as 'Louis the Leaper').

How long was Martin Luther in Wartburg Castle?

Martin Luther stayed in Wartburg Castle for around 10 months for his own protection after his excommunication. He translated the New Testament into German during this period.

How do you get to Wartburg Castle?

It is possible to walk up to Wartburg Castle from Eisenach or to take a public bus from the centre of the town. There are also large visitor car parks at the base of the building.

The substantial lore around the Wartburg starts with its origins.

It was allegedly founded by the imaginatively-named Louis the Leaper, an influential prince in the 11th century. Ignoring the inconvenient fact that the land did not belong to him, Louis apparently took earth from his own property up onto the Wartburg and spread it on the ground. In subsequent court hearings, the accompanying knights - whose word was trusted - stuck their swords into the earth and swore that their weapons were in land belonging to Louis.

Perhaps more believable is the idea that a watchtower (a 'Warte' in German) already stood on the hill and gave its name to the later Schloss Wartburg castle.

In the following centuries, the legendary minstrels' battle (a duel between some of the famous in Europe) is supposed to have taken place here - the romantic concept of the contest between the medieval minstrels was taken up in later centuries by writers and composers, such as Wagner.

And St Elizabeth of Hungary, canonised for her charitable works, was the wife of one of the rulers (the Thuringian landgraves) resident at Schloss Wartburg.

A famous episode in the life of Martin Luther took place at the Wartburg. Luther had been taken into protective custody to keep him safe from the Imperial forces who had excommunicated him. Disguised as a country squire, he spent his time in the castle translating the New Testament from Greek into German - an act that helped to create a modern German language as well as to increase access to the Bible. 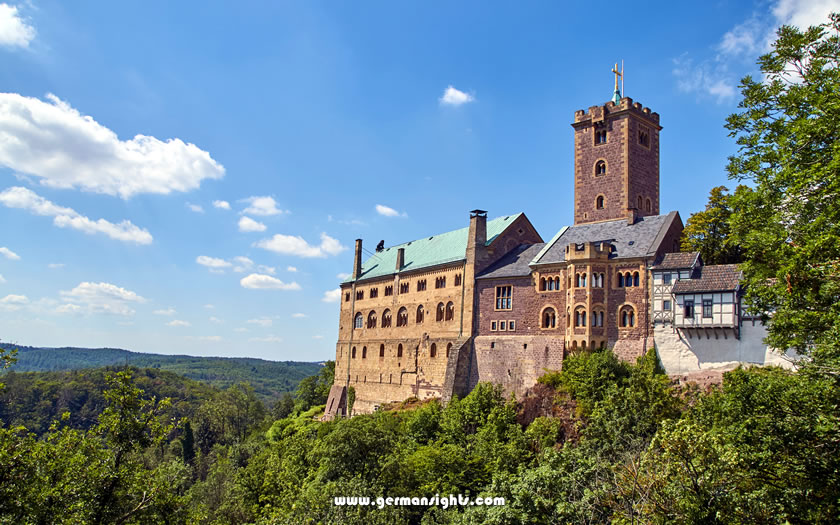 Goethe visited the Wartburg frequently during his time at Weimar and Eisenach. He was much taken with the location and with the intriguing history of the castle and planned to create an art museum there.

At around the same time - the end of the Napoleonic wars in the early 19th century - the Wartburg was used by student associations as an annual meeting place to push for their programme of German unification and a liberal constitution.

The Wartburg was renovated extensively in the mid-19th century. The Great Hall dates back to the 12th century and there are surrounding walls from the Middle Ages but much of the present castle dates from this renovation.

The Wartburg was placed on the register of the UNESCO World Heritage list in December 1999. UNESCO considers it to be a symbol of the past and present of Germany and an important location in the history of European Christianity.

How to get to Wartburg Castle

Wartburg Castle is located just outside the town of Eisenach in the German state of Thuringia. It can be reached by car - there are large parking areas available at the base of the castle - or by public bus from the centre of the town. It is also possible to walk up to the castle grounds on various routes, with most of about 2 to 3 kilometres in length.

The castle is open year-round and offers regular guided tours of the buildings (usually with one guided tour a day in English at around lunchtime).
Website: www.wartburg.de