Esslingen in southern Germany is an attractive town full of half-timbered buildings in the commuter region around Stuttgart.

It is also known as Esslingen am Neckar, adding the river Neckar to the name so as to avoid confusion with another Esslingen further north in Germany.

Although Esslingen is within the Stuttgart region and many residents travel to work in the big city, it is well worth a trip on its own merits. 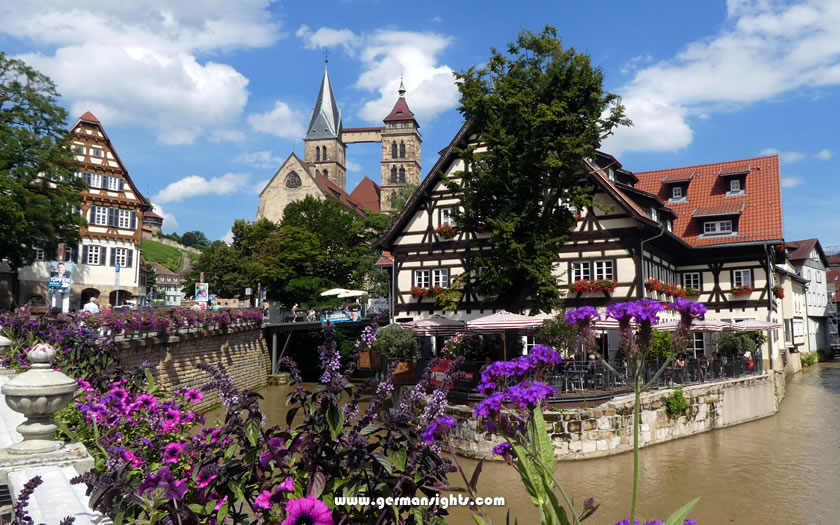 View of the timber-framed houses in Esslingen am Neckar

The timber-framed houses and other historic buildings in the medieval town, the city wall and towers and the vineyards around the city are all interesting attractions to explore in Esslingen.

More information about getting to Esslingen by road, public transport or air is available on our Esslingen travel page along with some options for hotel and other accommodation:
Esslingen Hotels & Travel

Map of Esslingen am Neckar

Archaeological finds have proved that there was a settlement at Esslingen back in prehistoric times and the Romans built villas in the area once it had become part of the Roman Empire.

The first time Esslingen was mentioned officially was in a document from the 8th century. The settlement, known as Hetsilinga, became a location for religious pilgrimage and the original town charter is supposed to have been granted early in the 9th century. 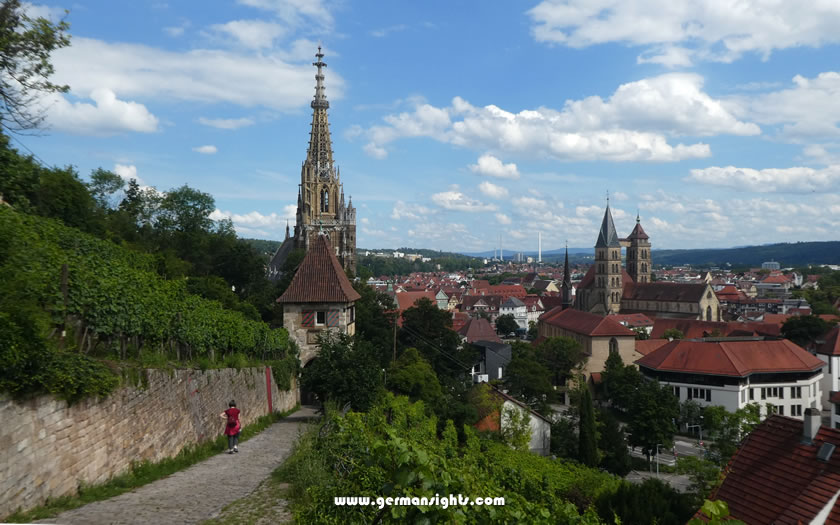 The hike through the vineyards above Esslingen

The early Middle Ages were the start of Esslingen's rise to prominence. Many important buildings were constructed in the 13th century including the parish church of St Dionysius and a bridge over the river Neckar.

It also became a Free Imperial City in the Holy Roman Empire (which gave the town a certain degree of independence from local rulers) but this did not stop Esslingen from being involved in an intermittent campaign against nearby Württemberg over the next two centuries.

The Imperial Diet was held in Esslingen at the end of the 15th century, where, among other things, the Swabian League of independent cities was founded. The last battles between Esslingen and Württemberg took place at the start of the next century. 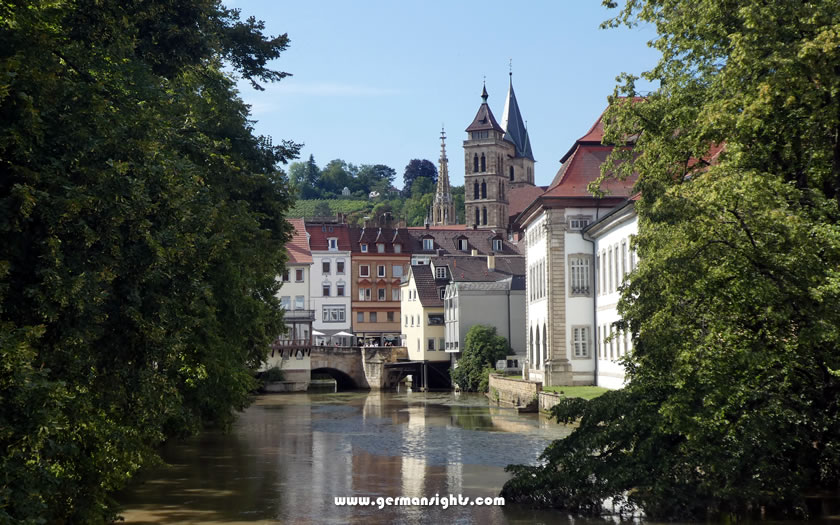 Esslingen and the Neckar river

Unfortunately for the town, the end of hostilities with Württemberg did not stop the seemingly endless round of battles during the following centuries, with the religious divisions of the Reformation, the plagues and refugees that followed the Thirty Years' War and the conflicts over who should succeed to the throne in faraway countries.

Esslingen finally lost its independence to its old rivals in Württemberg during the age of Napoleon at the start of the 19th century.

In the following decades, Esslingen was transformed into an engineering centre and lost a number of important historic buildings as factories and housing for workers were constructed.

The town suffered little damage in World War II, which meant that the medieval old town was preserved. The population had increased rapidly as a result of the industrialisation and underwent a further boom as refugees from East Germany settled in the town under American occupation.

Although it remains an important engineering centre and is full of students at the Esslingen University of Applied Sciences, it retains its attractions for visitors on a day trip from Stuttgart or even on a longer stay.

Marktplatz is another popular location, with the market square home to both the old and new town hall. It is also the venue for various festivals throughout the year, including the Esslingen Christmas market, which combines Advent celebrations with the style of a medieval market.

The old town hall, which the tourist office calls the most beautiful building in the town with its Renaissance facade, was built back in the 15th century.

Above the town it is possible to climb the narrow covered walkway up to the old city wall with its watchtower or, alternatively, to take a scenic stroll on the hillside through the vineyards which rise just outside the town centre.

The city tourist office is located on the Marktplatz and is open Mondays to Saturdays with slightly earlier closing on the Saturday.
Tourist Office: www.esslingen-marketing.de