Memmingen is an attractive town with a historic centre on the way south from Ulm towards Lake Constance and the Allgäu region.

It offers a small airport with international flights just outside the town which is becoming more popular with low-cost carriers. Although many of the arrivals may be on their way to other destinations, Memmingen makes a pleasant stopover for a night or two. 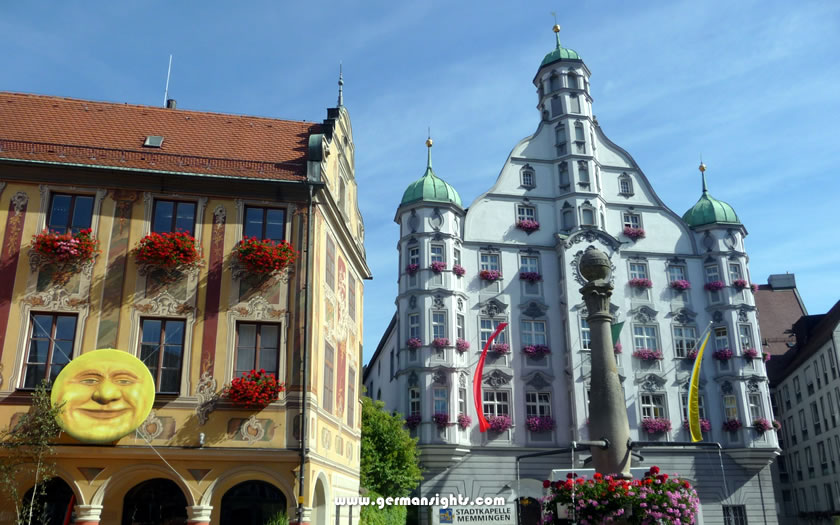 View of the Renaissance facade of the town hall in Memmingen

More information about getting to Memmingen and accommodation options in the town is available on the special travel page:
Memmingen Hotels & Travel

Originally a way-station on a Roman trade route, Memmingen grew in importance because of its position on one of the major salt roads and on an important route from Germany down into Italy.

It received its town charter in the 12th century and a hundred years on was elevated to a self-governing Free Imperial City ("Reichsstadt").

One of the most enduring historical aspects of the town is its participation in the upheavals at the time of the Reformation. 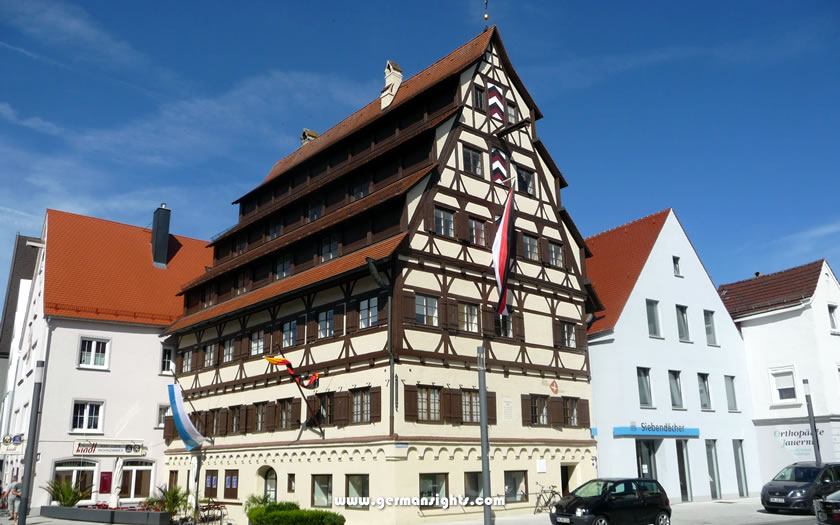 The 'House of Seven Roofs' in Memmingen

At the same time as Martin Luther was overturning the established beliefs of religion, there was a connected rebellion from the lower classes of society which ended up in the German Peasants' War of the 16th century.

One of the important documents from that time was the Twelve Articles agreed at a peasants' assembly in Memmingen - a declaration which some historians believe predates and influenced the ideas of the American Declaration of Independence and the French Revolution.

In memory of this declaration, Memmingen now awards the Memmingen Freedom Prize 1525 every four years to distinguish recipients who have performed outstanding work in the field of human rights.

After the 16th century the trading prosperity of the town began to decline because of changing trading patterns and the outbreak of war on important commercial routes. At the start of the 18th century the town was occupied by Bavarian troops and, for the first time, became part of Bavaria.

Some of the old town centre was destroyed during bombing raids in the Second World War - the nearby airport runways were also a target because of their military usage.

The tourist office in Memmingen is situated in the main square near the town hall. It offers information about the history of the town and two self-guided themed walks around the centre.
Website: www.memmingen.de