Mittenwald is a popular summer and winter resort in the Bavarian Alps on the edge of the Karwendel Alpine Park and just north of the Austrian border.

It is on the main route south from Munich to Innsbruck and, importantly for those looking to visit the town, it also has direct rail connections between the town and the two cities.

As well as the stunning alpine scenery, Mittenwald has plenty of history to explore - from markets in the Middle Ages to glaciers to river commerce to violin-making. 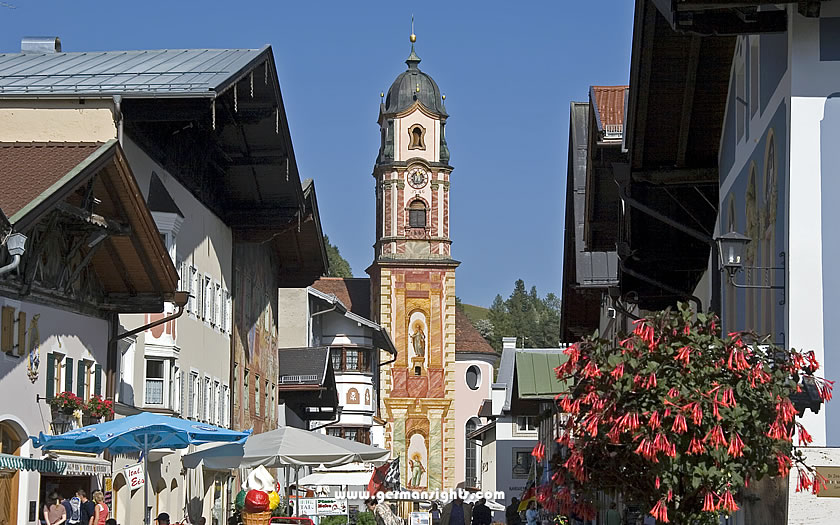 Mittenwald is very close to the border of the Austrian Tyrol in southern Germany. Transport information and hotel accommodation details can be seen on our travel page:
Where to Stay in Mittenwald

Like many of the principal settlements in southern Bavaria, Mittenwald was originally a way station on a Roman trade route. The route through what was then known as the "Scharnitz Forest" had previously existed but the Roman improvements made it into an important connection.

The Via Raetia ran from Venice up over the Brenner Pass, down to Innsbruck and then over the Seefeld plateau to Mittenwald. From there it headed on to Garmisch-Partenkirchen and, eventually through to the town of Augsburg.

The route shortened the previously-popular Via Claudia Augusta by two days and become the most important trade route between what is now southern Germany and northern Italy.

The trade traffic was obviously important to the towns which grew up along the way, but the improvements to the 'roads' and the feeling of safety in numbers encouraged other travellers (such as pilgrims) to use these routes as well. 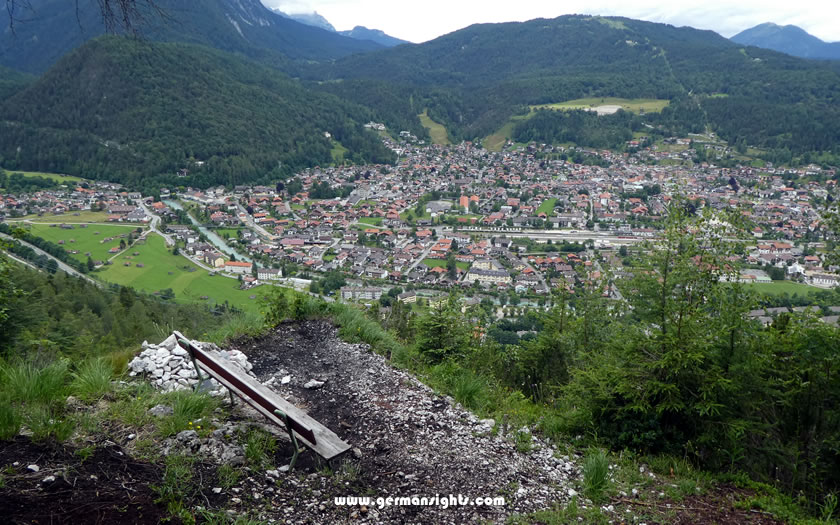 View over Mittenwald from the Karwendel mountains

The Roman road was built back around the end of the 2nd century AD but it wasn't until the 11th century that the first mention was made of a settlement where Mittenwald now stands.

By the 14th century it was granted market rights (important because of the guarantees it gave for the worth of the coinage and weights) and in the Middle Ages became an important point on the route for river traffic through to Munich. This rafting trade lasted through to the start of the 20th century.

One of the most important phases in the town's history came in the 15th century when the Bozner Markt (the major trading market which usually took place at the South Tyrolean town Bozen) was transferred to Mittenwald for two centuries.

The prosperity of this period was followed by a downturn when the market moved back to Bozen in the 17th century. As well as the loss of the trade and tax income, rival trade routes had opened up in the meantime.

At around the time of this economic downturn, Mittenwald's most famous son returned from Italy and brought with him the knowledge of how to construct a violin. Mathias Klotz taught his son and other apprentices what he had learned and that knowledge eventually made Mittenwald one of the most prestigious handcrafted violin-making centres in Europe.

Although the Mittenwald violin industry alone could not make up for the loss of the market and the trading opportunities, it did help alleviate the hardship. At one point there were more than 100 violin-makers working from home in this alpine town and violins made here are renowned amongst musicians.

A museum dedicated to the history of violin making in Mittenwald opened in 1930. It is located in the centre of the village in one of the oldest townhouses and is open all week except for Mondays. (Closed November to mid-December.)
Website: www.geigenbaumuseum-mittenwald.de

The more recent change to Mittenwald's fortunes came with the parallel development of mountain tourism with the expansion of the rail network.

Trips to the Alps started to become popular in the late 19th century and the opening of the rail link between Garmisch and Innsbruck before the First World War made it easier for tourism to flourish in the town and, nowadays, to become the major summer and winter industry.

As the last German town on the rail and road links south from Munich, Mittenwald is a popular day trip as well as a destination for longer breaks.

The boom in summer mountain tourism has helped the town. On the one side of the valley is the Karwendel Alpine Park, one of the largest nature reserves in the Alps.

On the other, the foothills of the Wetterstein range which runs between the border crossing into Austria and Germany's highest mountain, the Zugspitze. 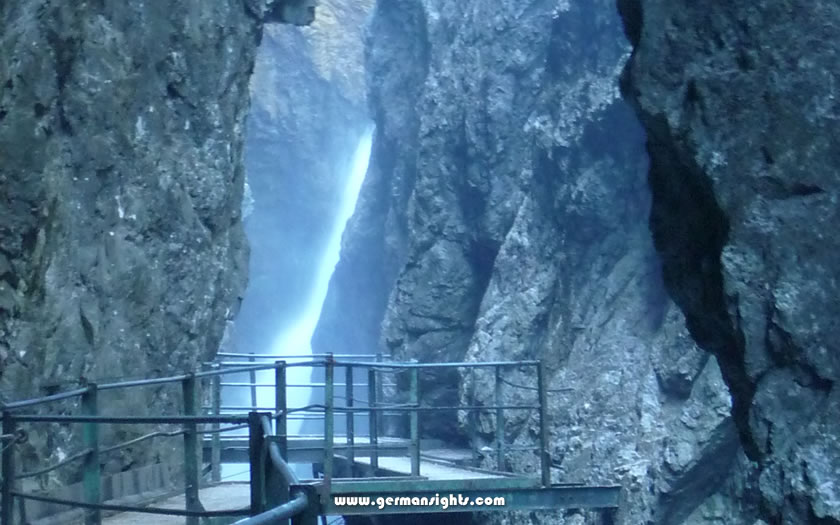 The Leutaschklamm gorge outside Mittenwald

One of the most popular walks outside the town is to the Leutaschklamm (pictured above). The 'small' gorge can be easily accessed from the town. Those who are a little more adventurous can climb up past a mountain restaurant (named after the evidence of the glaciers which formed the landscape in this area) to the Leutasch valley in Austria and the other end of the gorge.

The Austrians have renamed their part of the gorge into the Geisterklamm (the 'spirit gorge') and used EU funds to help construct an impressive walkway attached to the side of the cliffs above the fast-flowing water. It is now one of the most popular excursions in the area.

Just to the north of the gorge is the Franzosensteig - a mountain route over the Wetterstein ridge which was used by Napoleon's forces to outflank Austrian defences. And above the town on the same flank are the Ferchensee lake and Lautersee lake, two attractive mountain lakes, as well as the Kranzberg.

The Kranzberg is a rounded and relatively low hill which houses Mittenwald's small ski area in the winter and acts as an easily accessible mountain walking area in the summer.

On the other side of the valley across the river Isar, the Karwendelbahn cable car accesses the top of the mountain range of the same name. It is used by tourists (there is a nature information display in a centre which extends out over the drop above the town), by mountain walkers on their way into the Karwendel Park or along the high via ferrata between Mittenwald and Scharnitz in Austria, and by skiers in the winter looking to take the unpisted Dammkar run (the longest ski route in Germany) back to the town.
Website: www.karwendelbahn.de

The Mittenwald Tourist Office is located just outside the pedestrian centre in a side street on the way up to the railway station. It is open Mon-Fri year round and on weekends and public holidays in the morning during the winter and summer seasons.
Website: www.alpenwelt-karwendel.de