Hohenzollern Castle rises above the surrounding countryside in southern Germany as one of the most spectacular of the many castles in the country.

The ancestral seat of the family dynasty of the same name, Hohenzollern Castle as we see it today is actually a relatively modern construction, with much of the building dating from the mid-19th century.

The origins of the castle are much earlier however, with the first mention of a fortress in the location in the 13th century.

Where is Hohenzollern Castle located in Germany?

Burg Hohenzollern is located in the German state of Baden-Württemberg near the towns of Hechingen and Bisingen on the edge of the Swabian Alb mountains.

When was Hohenzollern Castle built?

The original castle is thought to date from the 11th century, but nothing remains of this building. The current version of the castle mostly dates from the mid-19th century.

How far is Hohenzollern Castle from Stuttgart?

Hohenzollern Castle is in Swabia around 70 kilometres south of Stuttgart and about an hour's drive from the city.

How do you get to Hohenzollern Castle?

The castle is located just off the B27 road just south of the town of Hechingen and not far from the A81 between Stuttgart and Singen. There are large car parks in the castle grounds with shuttle buses and walkways up to the entrance.

Hohenzollern Castle stands on a rock outcrop of harder Swabian Jura limestone that survived the erosion which flattened the surrounding countryside over the centuries.

It is thought to have first been built during the 11th century when the Hohenzollern dynasty started on its rise to prominence.

The first real mention of Hohenzollern Castle can be found back in the 13th century in the annals of the Stetten monastery when they refer to "sub castro zolre" ("under the Zollern castle").

This structure was destroyed after a ten-month siege in the Middle Ages. The second castle was built some decades later on the foundations of the first. With the rise of power of the Hohenzollern family, the castle was made into a fortress - one which observers in those days believed was impregnable. 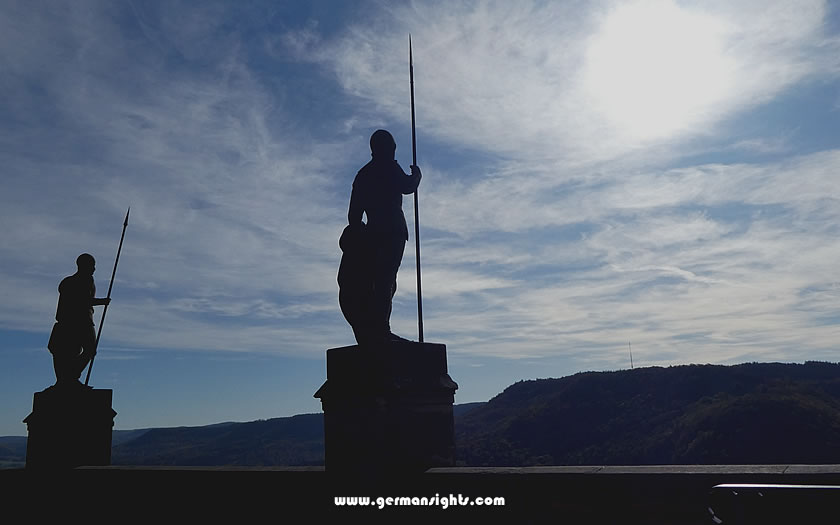 Knights on the walls of Hohenzollern Castle

However, just over a decade later, the castle was occupied during the Thirty Years War after a nine-month siege during which the defenders suffered from starvation.

The castle then came under the control of the Austrian Habsburgs before the French army occupied it during the War of the Austrian Succession in the 18th century. It fell into disrepair and was a romantic ruin in the Swabian Alps by the time it was visited by the Crown Prince of Prussia near the beginning of the 19th century.

The then prince and later King Frederick William (Friedrich Wilhelm II) wrote: "The memory of that time is tremendously dear to me and like a beautiful dream, especially the sunset we saw from one of the castle bastions. ... Now it is a childhood dream to see the Hohenzollern made habitable again."

Work started on the third version of the castle in 1850 and was finished by 1867. Like Neuschwanstein Castle in neighbouring Bavaria which was constructed around the same time, it was an expression of an architectural ideal, a romantic palace rather than a real castle. Although it was funded by the Hohenzollern dynasty it was rarely used as a residence for the royal family.

The castle is still owned by the two branches of the Hohenzollern family (the Swabian branch and the Brandenburg-Prussia line) and it welcomes just under 350,000 visitors each year to the gardens, chapels and a guided tour of some of the castle rooms.

Those who enjoy this castle may wish to take the short journey to the impressive Sigmaringen castle, also owned by the Hohenzollern family, or to Lichtenstein Castle, to the northeast in the Swabian Alb.

The map below shows the location of the castle and some of the accommodation available in the region. The map can be zoomed in and out by using the '+' and '-' markers.