Coburg is one of Bavaria's northernmost towns, located to the north of Bamberg in the Upper Franconia region of the state at the southern edge of the Thuringian Forest.

The relatively small town is known for its impressive fortress, the Veste Coburg high above the old town, and as part of one of the small German states which flourished in this area. The duchy of Saxe-Coburg has historical importance for the British royal family, as the current British monarchy are descendants of Albert of Saxe-Coburg-Gotha, the husband and consort of Queen Victoria. 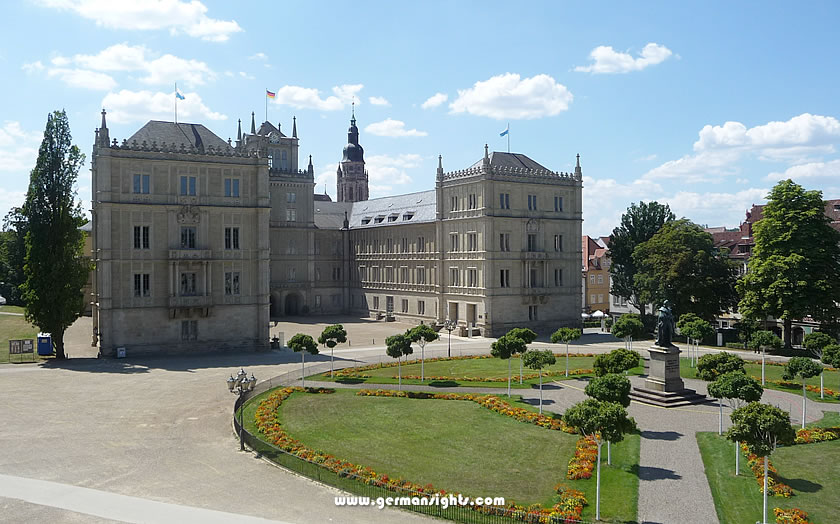 The impressive Schlossplatz in the old town of Coburg

The attractive old town and the fortress make this a pleasant base to stay north of the more popular tourist destinations of Bayreuth and Bamberg - more information about the range of accommodation on offer and how to get to Coburg is available on the travel page:
Coburg Hotels & Travel

Coburg first appears in official documents in the 11th century, when a monastery was built on the hill where the fortress now stands. The monastery later moved to the area of the St Maurice church in the present old town.

Although there was an earlier settlement at the base of the hill, the first mention of the town of Coburg comes later in the 13th century and the town received its charter in the 14th century.

Coburg changed hands between the rulers of the small states which were common in this area in the Middle Ages, eventually becoming a stronghold of the Reformation and coming under the control of the Dukes of Coburg in the late 16th century. 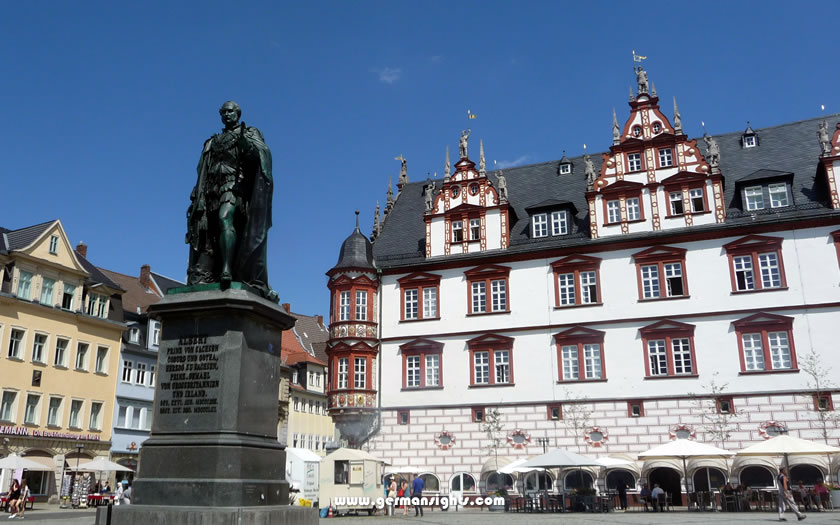 The Stadthaus on Coburg's Market Square

The town became the official residence of the Dukes of Coburg (later Saxe-Coburg) in the 16th century and they built the Palace of Ehrenburg in the Schlossplatz (see photo at top of article).

The end of the 16th century saw a spate of construction where some of the current more historic areas of the town were built, such as the central Marktplatz.

Coburg, like many other towns in Germany, was occupied during the Thirty Years' War and lost a good proportion of its population. Coburg experienced many more changes in rulership with the shifting boundaries of the fiefdoms in Thuringia and Saxony. One thing that its rulers were talented at was arranged strategic marriages into the European ruling houses and, at one point, members of the Saxe-Coburg-Gotha ruling family were part of the the royal families of Britain (later to change their name to Windsor), Belgium, Portugal and Bulgaria.

The end of the 19th century and beginning of the 20th century brought the advent of industrialisation before Coburg took the fateful decision to merge with the state of Bavaria rather than Thuringia after the First World War.

Coburg was renowned as a strongpoint for Nazi sympathies in the run-up to the Second World War. In 1922 a violent procession organised by the NSDAP - the "Zug Nach Coburg" - became one of the mythical points marking the rise of Hitler and his supporters. Coburg was the first town to elect the NSDAP to power and the first to award Hitler honorary citizenship.

It suffered little damage in the fighting of the Second World War but the end of the conflict had a major impact on it. Much of the countryside around it was occupied by Russia and eventually became part of East Germany, while Coburg, because of the previous vote to join Bavaria, came under American occupation and eventually joined West Germany.

The Coburg tourist office is located just off the Marktplatz in the centre of town. It is open from Monday to Friday and on Saturday mornings in the summer season:
Website: www.coburg-tourist.de

The fortress above Coburg - the 'Veste' - was constructed back in the 13th century. It was originally seen as a military strongpoint for the small province and the fortifications were expanded and improved over the centuries by successive rulers.

It served as a refuge for Martin Luther during one of the periods where he needed protection in the 16th century. During the six months he spent at the Veste, he worked on his translation of the Bible.

After the Napoleonic wars, the military significance of the fortress was less important and it became the home of the art collections of the rulers of Saxe-Coburg, with the moat being filled in and replaced by a promenade walk. 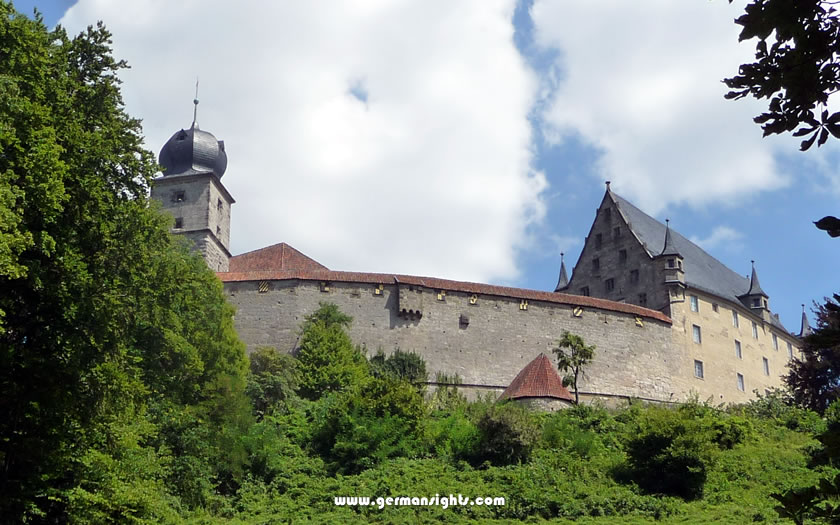 View of the Veste Coburg fortress

By the beginning of the 20th century, structural problems meant that renovations were necessary and many changes to the original designs were made in order to make it more suitable as its new use as a museum and monument in itself. Ownership was transferred from the ducal family to the state of Saxe-Coburg and, shortly afterwards, to the Free State of Bavaria after the unification.

The Veste suffered some limited damage after fighting in the Second World War but this was rapidly restored and the building returned to its role as museum.

The Veste is visible from the town centre of Coburg and it is around 30 minutes walk up from there through the pleasant shady Hofgarten park area to the entrance. There are impressive views from the battlements of the surrounding countryside.

The Veste now houses various important collections of art, interior decoration and military devices. It is open every day during the summer months and only in the afternoons from Tuesday to Sunday during the rest of the year.
Website: www.kunstsammlungen-coburg.de