Ludwigsburg is a sizeable town famous for its Baroque palace complex just to the north of Stuttgart, the capital of Baden-Württemberg.

The main town is located just to the west of the Neckar river, although the suburbs and several walks through the vineyards do reach the riverbank.

Although the town attracts many tourists to the famous residential palace and gardens, it is also home to a number of engineering, banking and insurance companies, as well as a prestigious film school, the Filmakademie Baden-Württemberg. 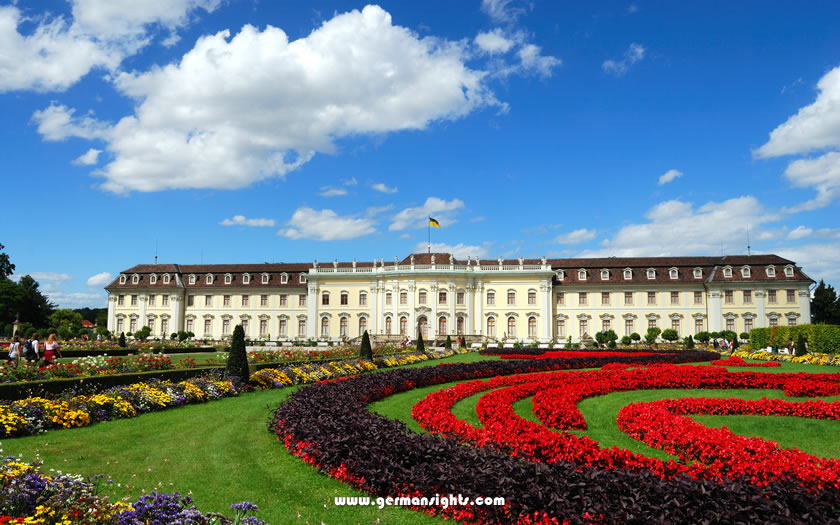 View of the Ludwigsburg Palace and Gardens

Although many tourists visit Ludwigsburg Residential Palace on a day trip from Stuttgart, the town makes a good base for exploring the sights around the state capital and other attractions to the north. The train station near the city centre offers regular services into Stuttgart and north to Heilbronn and Heidelberg.

More information about how to get to Ludwigsburg along with the best transport options is available on our Ludwigsburg travel page along with some details of hotel accommodation in the city:
Ludwigsburg Hotels & Travel

Archaeologists have discovered remains of prehistoric settlements in the Ludwigsburg region, although the city itself only really dates back to the early 18th century.

It was built to the west of the Ludwigsburg Residential Palace by Duke Eberhard Ludwig of Württemberg as a planned community according to the designs of the palace architect Donato Giuseppe Frisoni.

The idea was that wide avenues and low residential buildings would form a geometric pattern around the market square (Marktplatz).

The Duke aimed to use the new settlement as a new court (and location for him to spend time with his mistress) and offered various inducements for those wishing to move there from Stuttgart: freedom from taxes for a certain period; freedom of religious expression; and free land and building materials.

However, he also wanted 'ideal' inhabitants and so prospective citizens were required to meet certain income levels.

In 1718 the capital of Württemberg was moved from Stuttgart to Ludwigsburg and all government staff were ordered to relocate.

Nonetheless, by the time of Duke Eberhard Ludwig's death in 1733 Ludwigsburg still only had half the population of Stuttgart.

Under his descendants, the capital of Württemberg swapped back and forth between Stuttgart and Ludwigsburg before settling in Stuttgart under Duke Carl Eugen.

The final switch to Stuttgart in 1775 came as the result of a political power struggle and Ludwigsburg rapidly declined in importance (getting the derisive nickname of 'Grasburg' as the buildings and avenues became overgrown).

Ludwigsburg regained part of its former prominence when the Residential Palace was declared a 'summer residence' by Duke Frederick II of Württemberg at the end of the 18th century.

Between 1798 and 1804 he had the palace gardens redesigned into an English landscape garden as part of the then popular 'Classicism'.

Ludwigsburg had long been a garrison town and, allied with the French under Napoleon, thousands of Württembergers marched off on the Russian campaign - with only around 500 soldiers returning. The city however retained a large military presence during the following decades.

The religious freedom offered originally in Ludwigsburg had led to a sizeable Jewish population in the city. However the synagogue was destroyed during the 1938 pogrom - the original site now has a memorial of suitcases represented those murdered during the Nazi period.

The city suffered relatively lightly during the fighting at the end of World War II and a large US Army barracks was stationed there until the 1990s.

Ludwigsburg tourist office is located on the edge of the central pedestrian area. It is closed on Mondays and public holidays and has shorter opening times on Sundays.
Tourist Office: visit.ludwigsburg.de

The Ludwigsburg Residential Palace is one of the largest baroque palace complexes in Europe. It covers nearly 80 acres and includes more than 450 rooms.

The construction of the palace, sometimes called the 'Swabian Versailles', started in 1704 before that of the main town of Ludwigsburg as a retreat for the ruler of Württemberg.

Duke Eberhard Ludwig felt restricted by his original capital Stuttgart and the partial destruction of the New Palace there allowed him the opportunity to build a new court out in the countryside.

It was no coincidence that this also allowed him to live with his mistress, Wilhelmine von Grävenitz, rather than his wife, Johanna Elisabeth von Baden-Durlach.

Duke Eberhard never actually got to see the completed palace - he died a few months before the last rooms in the final building (the Neuer Hauptbau) were finished in 1733.

Although the palace is mainly known as a complex of buildings in the Baroque style, it also incorporates Rococo and Neoclassical elements added by Eberhard's descendants over the following decades. 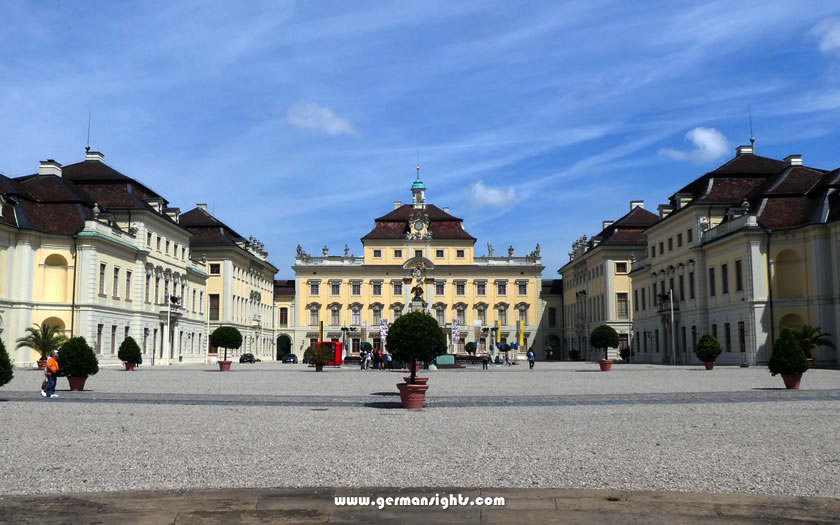 Nowadays, the palace is a major tourist attraction in the Stuttgart region, attracting hundreds of thousands of visitors each year.

It is possible to book a standard tour of the palace as well as visit one of the four museums in the complex.

It is also the site of the annual Ludwigsburg Festival, a major cultural event at the start of each summer.

The main palace buildings are surrounded by formal gardens at the front and other garden areas at the rear, including a fairytale garden for children, which are collectively known as 'Blühendes Barock' ('Blooming Baroque'). A separate entry fee is charged for a ticket to the garden areas.

A bridge leads over the busy road at the back of Ludwigsburg Palace to Favorite Park, a large parkland area with wildlife and paths leading through to the small lake palace of Monrepos. 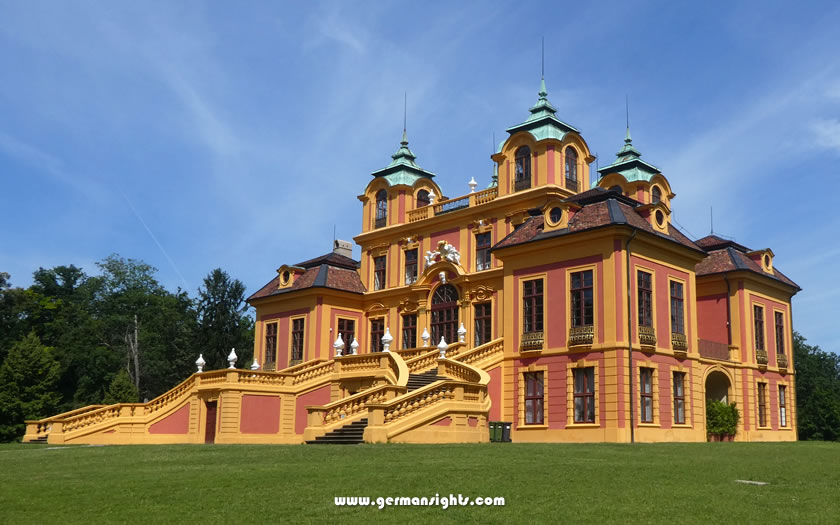 Schloss Favorite, near the entrance to the park, was originally built in the early 18th century and was designed as a small 'hunting castle' (or rather a large country villa) with access to the woods and fields of the surrounding countryside.

Part of the attraction of this type of building for rulers was to have an escape from the official duties of the court.

Monrepos Palace is another hunting lodge around three kilometres from Schloss Favorite through the parkland of Ludwigsburg. This lodge was built on a small lake a century after the other two palaces and still belongs to the former royal family of Württemberg. 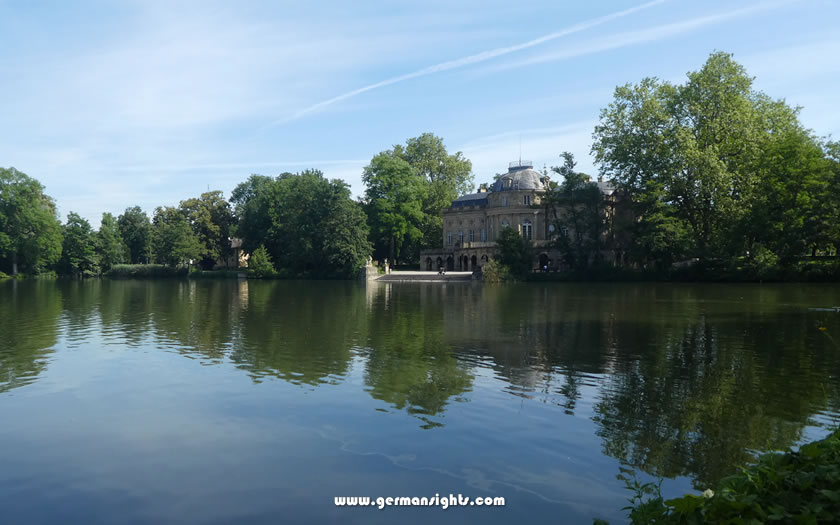 Monrepos Palace viewed from across the lake

The route through Favorite Park to Schloss Monrepos is a favourite outing for local joggers, walkers and cyclists. Paddle boats can be hired to explore the small lake near Monrepos.