Rottweil is a medium-sized town located just outside the Black Forest region to the south of Stuttgart which proudly holds the title as the oldest city in Baden-Württemberg.

It is popular with visitors for its medieval centre, its towers (not all historic) and its fountains.

And, of course, it is the location that gives its name to the renowned breed of Rottweiler dogs, possibly dating back to the days of Roman settlement and their use for herding and guard duties. 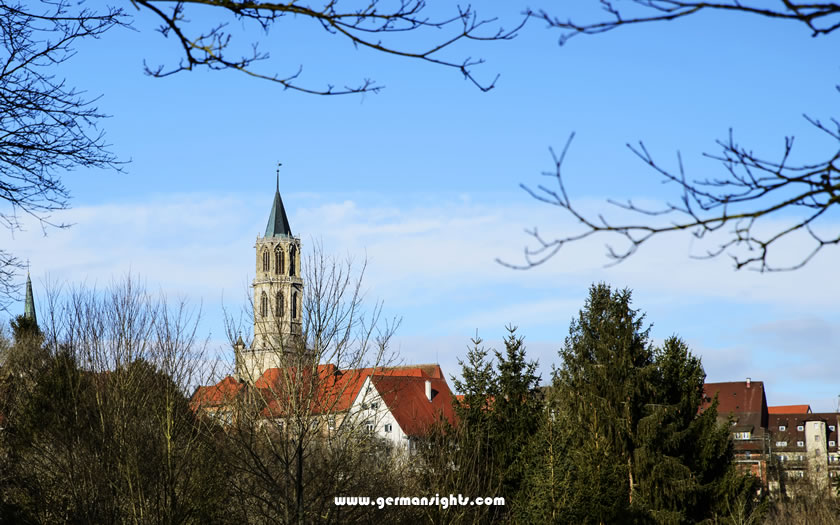 Rottweil is located on a main rail line between Stuttgart and Singen and more information about public transport or the nearest airport is available on our Rottweil travel page along with some options for hotel accommodation:
Rottweil Hotels & Travel

Settlement in the area around Rottweil dates back to prehistoric times, but the history of the town really begins with the Romans arriving in the 1st century AD.

They founded a strongpoint known as Arae Flaviae which was the only Roman location to possess a town charter in the area from the Rhine through to Augsburg.

The settlement which later became Rottweil was situated in a strategic position at the junction of a number of trade routes - at the time it was one of the largest Roman towns in the area. 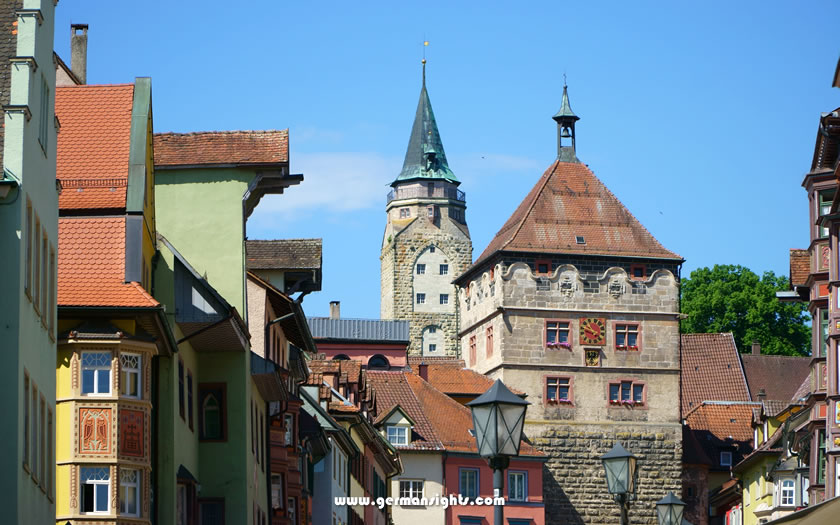 Following the withdrawal of the Romans, their settlement declined until it became the site of a royal palace under the Germanic tribes with the name Rotuvilla (first mentioned in the 8th century). Under the Hohenstaufen rule it reached the heights of an administrative centre and court for the surrounding area and became a Free Imperial City in the 15th century.

In the 16th century it joined the Swiss Confederation, although it remained staunchly Catholic in contrast to its allies during the period of the Reformation. It was occupied a number of times during the various wars which plagued central Europe in the Middle Ages.

Rottweil became part of the state of Württemberg as part of the legal dissolution of the Holy Roman Empire at the start of the 19th century during the period of the Napoleonic Wars.

The town was connected to the rail system in Württemberg in 1868 and is nowadays an important junction with connections to Stuttgart, Zurich and the Black Forest.

These days, Rottweil is an administrative centre with an attractive old town of towers, churches and fountains. 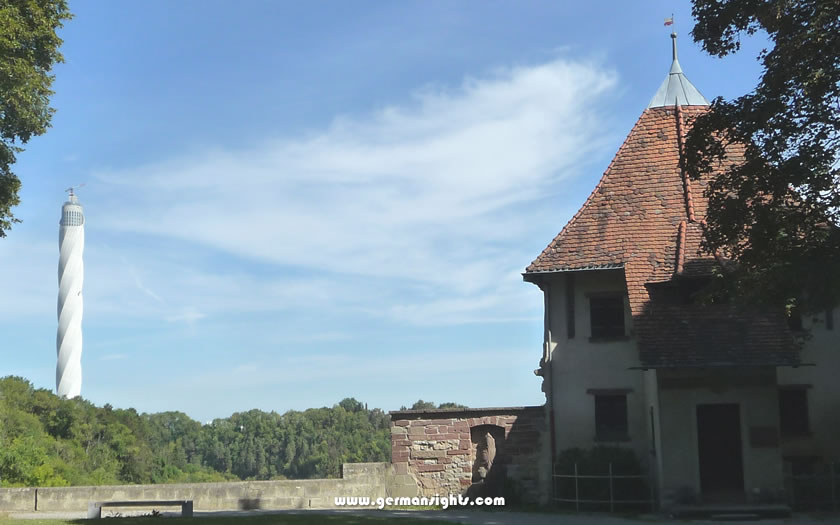 The historic Pulverturm and the modern ThyssenKrupp Test Tower near Rottweil

Another of the sights is more modern, with the construction of the ThyssenKrupp Test Tower in the nearby industrial area in 2017. The 246-metre tower was built for research into lifts (elevators) and has the highest viewing platform in Germany at 232 metres. It is open to the public from Friday to Sunday and occasionally on other dates during the summer high season.

The tourist information office in Rottweil is located about halfway up the Hauptstrasse. It is open from Monday-Friday year-round and on Saturday mornings in the summer months.
Tourist Office: www.rottweil.de (German only)