As the highest mountain in Germany, the Zugspitze holds a particular mystique in the country.

To be perfectly honest, the altitude of the cross on the top is dwarfed by other mountain ranges just a short distance away across the Austrian border.

But the setting, the history and the activities possible around the Zugspitze combine to make it a worthwhile destination for anyone visiting this part of Bavaria. 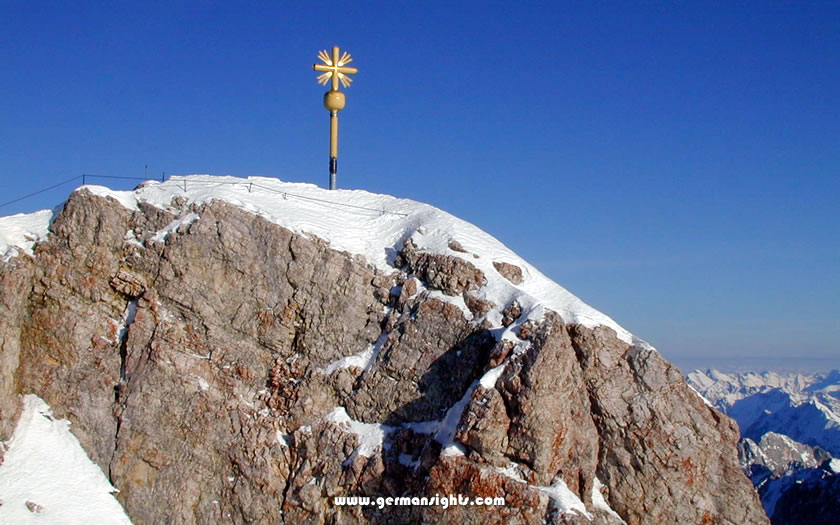 The cross on the peak of the Zugspitze

Quick Facts About the Zugspitze

Where is the Zugspitze?

The Zugspitze is part of the Wetterstein range of mountains which flank the Bavarian ski resort of Garmisch-Partenkirchen. It is located on the border between Germany and Austria.

How high is the Zugspitze?

The official height of the Zugspitze is 2962 metres.

How can you get up the Zugspitze?

The Zugspitze can be reached on the Bayrische Zugspitzbahn mountain railway which leaves from a building just behind the main Garmisch-Partenkirchen train station. There is also a modern cable car to the summit from the Eibsee lake. Or you can hike one of two strenuous routes from the town...

The Zugspitze lies in the Wetterstein range, a chain of limestone peaks marking the border between Austria and Germany and stretching from Ehrwald in the Tyrol through to Mittenwald in Bavaria.

At 2962m, it is both the highest mountain in Germany and in the Wetterstein range itself. It was first climbed shortly after the Napoleonic wars by an Austrian member of the Bavarian army - this was part of an effort to survey the area accurately as the border between the two countries then and now runs across the top of the Zugspitze.

The cross on the top was first erected in 1850 and moved to its current location in 1882. This was followed before the end of the century by the first building on the ridge - a hut for overnight stays by mountain climbers. A weather station quickly followed - the observers had to be supplied by the climbers until a more permanent access was constructed.

This came by means of the Bayerische Zugspitzbahn - a mountain railway which leaves from the main train station in Garmisch-Partenkirchen and skirts the base of the different ski areas in the town before heading up to Grainau and the Eibsee lake at the foot of the Zugspitze. Here the train turns into a cog railway and runs inside a mountain tunnel until the final stop in the middle of the glacier (originally the final stop was in the Schneefernerhaus hotel with a lift to the summit buildings).

The idea of a mountain railway had been around since the end of the 19th century but it was finally built by 1930, in time for the Passion Play at Oberammergau that year. The hotel and cable car to the summit buildings were added a year later. The final addition was the cable car down from the summit to the Eibsee in 1963.

With the addition of the new railway terminus in the middle of the ski area and a new cable car to the summit, the Schneefernerhaus closed in 1992 and was turned into a weather research station.

The modern cable car from the Eibsee to the summit only takes 10 minutes to span the altitude difference of just under 2000 metres.

The Zugspitzplatt ski area is understandably also the highest in Germany and is naturally popular because of its snowsure runs.

The area is not that big and it does take a while to get there from Garmisch but it is certainly an enjoyable winter excursion for a day.

It is also popular at the beginning and end of the ski season as the area opens earlier and closes later than the runs lower down nearer the town. 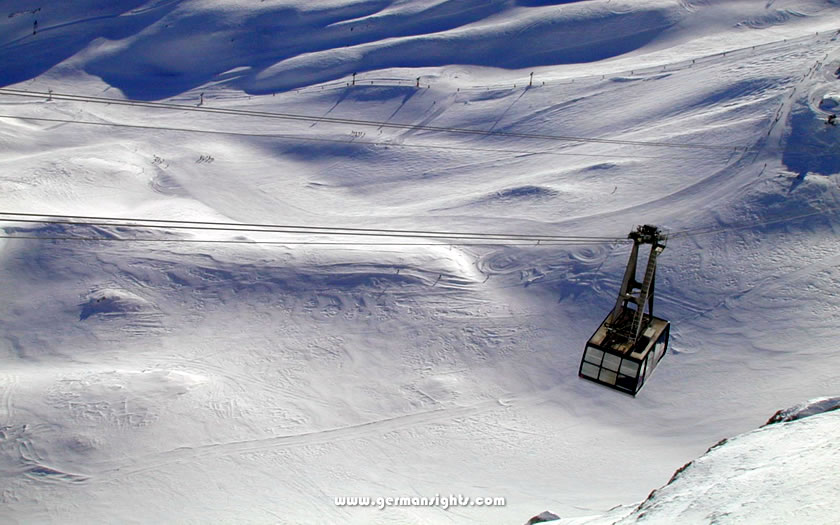 The cable car down to the Zugspitze ski area

Of course, the cog railway and cable car can be used by pedestrians as well in the winter.

An interesting ski excursion - in suitable conditions - can be taken using the mountain railway and getting off at the 'Riffelriss' stop inside the mountain. Exiting the tunnel into the fresh air, there is a generally-unprepared natural snow run down to the Eibsee lake.

How to Get to the Zugspitze

There are two real options:

The Zugspitze is possibly even more popular in the summer months. The views are stunning in good weather and the concepts of the round trip journey using both train and cable cars is attractive to many day-trippers.

There are also a number of routes up the Zugspitze for keen walkers.

The trail up the Reintal (and thus ending up where the skiers are in winter) is the easier route but probably requires an overnight stay in a hut for those not fancying the idea of 22km uphill in a day. 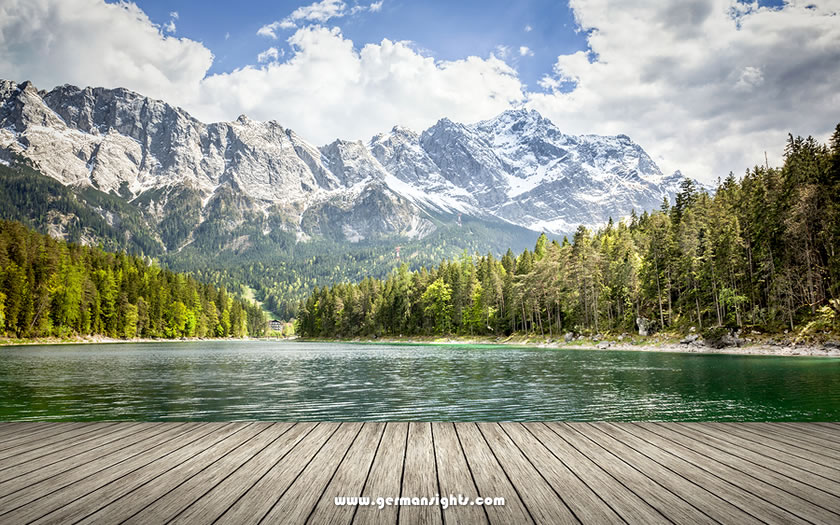 The Zugspitze from the Eibsee lake

A harder but very worthwhile alternative is the route through the Höllental gorge. This 9km hike has variety in spades, including metal ladders, airy (and serious) traverses and a trek across a glacier before the final stretch up the rockface to the top.

As they say, 'good weather, experience in the mountains, surefootedness and a lack of vertigo' are required for this trail.

Map of the Zugspitze