Deggendorf is a town of 35,000 in eastern Bavaria situated on the banks of the Danube near its junction with the Isar river.

It calls itself 'the gateway to the Bavarian Forest' and the town includes both the lowlands on either side of the Danube river as well as the foothills which rise towards the mountains on the Czech border - with the altitude varying between 300m and 1100m.

Deggendorf does have some hotel accommodation as it is also a cultural centre for the area - more information about different types of accommodation and transport to the town is available on the travel page:
Deggendorf Hotels & Travel

Deggendorf has always been a strategically important location - it was once where the trade route following the Isar downstream through Lower Bavaria met up with the traffic along the Danube and the tracks coming through the mountains from Bohemia.

The first mention of Deggendorf dates back to the 11th century with the first use of a similar name ('Techindorf') - the town charter was granted in the early 14th century.

Because of its important location in southern Germany, Deggendorf was granted financial advantages by the Wittelsbach rulers of the area, similar to those enjoyed by neighbouring Straubing. 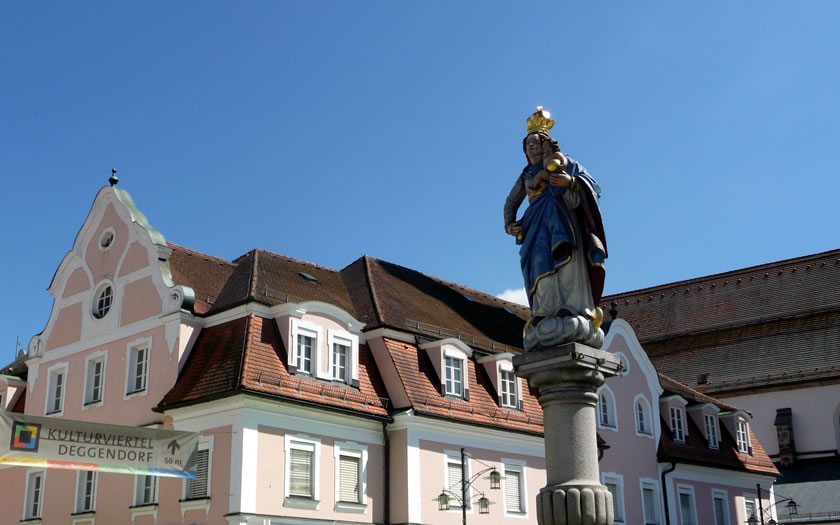 The entrance to the Cultural Quarter in Deggendorf

After its rise to riches and influence in the early Middle Ages, Deggendorf was badly affected by war and disease, losing two-thirds of its population at one point to the plague. It wasn't until the 18th century that the town started to regain its former stability (although most of the buildings were burned in the War of the Austrian Succession in the middle of the century).

The rail connection crossing the Danube and linking Deggendorf to the Bavarian Forest and the principal main lines in the south was a catalyst for an economic boom in the 19th century and the increasing prosperity led to the destruction of some of the historic remains, such as the old town walls.

Deggendorf never was a heavily industrialised town, although there were some mills using the power of the nearby river, and nowadays as in time gone by it lives from its convenient position at the junction of the Isar and Danube and, more specifically now, the junction of the motorways between Regensburg, Passau and Munich. As well as the access to the Bavarian Forest, leisure facilities in the town and Deggendorf's 'cultural quarter' with its museums and old town, attract visitors to the area.

The Deggendorf tourist office is situated in the central Altes Rathaus (former town hall) building in the centre of the town. It is open from Monday to Friday and on Saturday mornings:
Website: www.deggendorf.de