Bamberg is a beautiful example of a medieval Bavarian town - so much so that the city in Upper Franconia has its own UNESCO World Heritage site listing.

Built on seven hills, the city of Bamberg is often compared to Rome, with its mixture of religious and administrative buildings dating back to the Middle Ages.

And, Bamberg being located in Bavaria, it is also renowned for its breweries and its distinctive local beer with a smoky taste. Sample a drop of the Bamberg flavour in a brewery beer garden in the old town. 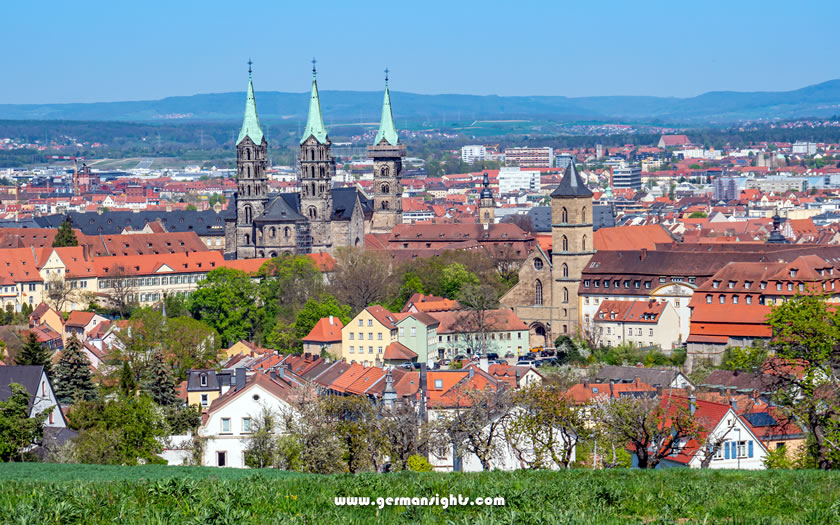 View over Bamberg in Upper Franconia

Bamberg is high on the list of sights that tourists are looking to visit in the Franconia region of northern Bavaria and, as a result, offers a wide range of accommodation. Details of the nearest airports, the rail connections and Bamberg hotel information are located on our travel page:
Bamberg Hotels & Travel

Archaeological remains show that there were settlers in the Bamberg area from the Early Stone Age onwards, but generally the history of the city is said to have started in the 10th century.

The first written evidence of Bamberg dates from this period and it relates to a fortification on the hill where the cathedral is located.

The construction of that cathedral at the start of the 11th century was important for the town status as it became the seat of the diocese.

Unfortunately the first two attempts both burned down and the current cathedral dates from the 13th century.

The architecture and infrastructure of the centre of Bamberg was listed in 1993 as a UNESCO World Heritage site and the main reason dates from this era in the early Middle Ages, when it became an important link with the Slav communities to the east and the layout served as a model for other medieval towns in middle and northern Germany. 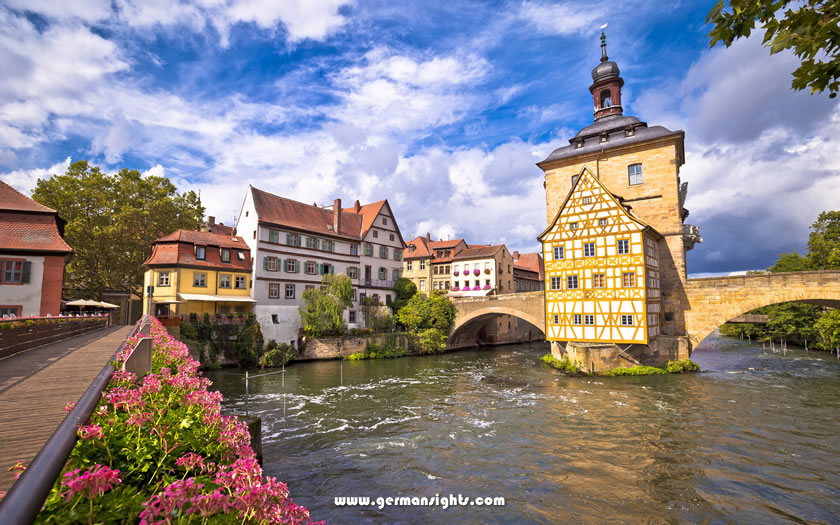 In the early Middle Ages, Bamberg became one of the most important cities in the Holy Roman Empire. Ruled by one of the early German dynasties, the religious Henry II along with his wife Kunigunde (who were both later canonised) developed the city into a northern bulwark against the power of the Slavic rulers to the east.

When the ruling line died out, the power in the city shifted to what were known as the 'prince-bishops' - religious leaders who also held political power. The bishops were not always popular with the influential leaders of the town and, while the hills in the town area became identified with religious institutions, down below the rich merchants and traders developed what became known as the 'island district' on the banks of the River Regnitz.

Bamberg suffered from internal divisions - an insurrection against the prince-bishops, pogroms against the Jewish population and regular show trials for witchcraft (involving prominent families) - as well as from external problems, with bouts of the plague and the frequent religious wars of the Middle Ages.

In the Thirty Years' War, for example, the city lost 40% of its population.

The 18th century saw the flourishing of the city again under more authoritarian religious control and many of the buildings in Bamberg centre in the Baroque style, such as the New Residence, date from this period.

As with many other German cities and towns, the Napoleonic era made major changes to Bamberg. Most of the religious institutions were disestablished and Bamberg lost its independence and became part of Bavaria (although it was also occupied by the French for a while).

The 19th century saw a rapid expansion of the city with the opening of the Ludwig canal (linking the Rhine and the Danube) and the connection of Bamberg to the rail system. The population of the city more than doubled by the end of the century and then, boosted by refugees, had doubled again at the end of the Second World War.

Nowadays it is a university city of just under 75,000 people in the Upper Franconia region of northern Bavaria. 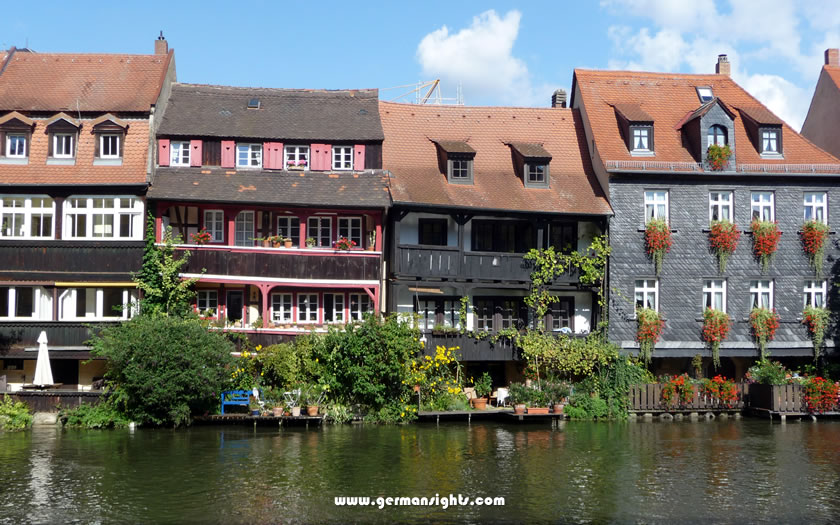 'Little Venice' on the Regnitz in Bamberg

The Seven Hills of Bamberg

The Domberg is the most important of them, with the imposing open space of the Domplatz bounded by the New Residence, Bamberg cathedral and the Old Household (Alte Hof) of the prince-bishops.

The silhouette of St Michael's monastery can be seen from the centre of Bamberg on the Michaelsberg. The former monastery church can be visited and the surrounding buildings also house the interesting Franconian Brewery Museum, run by beer enthusiasts.

The Jakobsberg, next to the Michaelsberg, hosts the Church of St Jacob and lies on the old pilgrims' trail to Santiago de Compostela on the northern coast of Spain.

The Altenburg is a little way outside the centre of Bamberg but the tower of the former fortress is a landmark that can be seen from most parts of the city. Tours are available around the historic building.

Back in the city, the Kaulberg is the next hill moving counter-clockwise. The Carmelite monastery and the Church of Our Lady (the Obere Pfarre) are situated here, as well as one of the youth hostels.

Down towards the banks of the river Regnitz, the Stephansberg is somewhat unsurprisingly home to the Chruch of St Stephen, the location of another of Bamberg's churches whose origins can be traced back to Henry and Kunigunde.

The final hill, the Abtsberg, is slightly to the north of the Michaelsberg and is these days mainly a residential area with no particular 'sights'.

If Germany is famous for its beer and the southern state of Bavaria renowned for its beer purity law, then the Bavarian city of Bamberg sees itself as 'Bierstadt' ('Beer Town').

Nowhere else, say the Bambergers, are there so many breweries as in the city and the surrounding districts. Nine private breweries still operate in the city itself.

It's not only the quantity of beer in Bamberg - the city also boasts its very own type of beer, the smoky 'Rauchbier'. 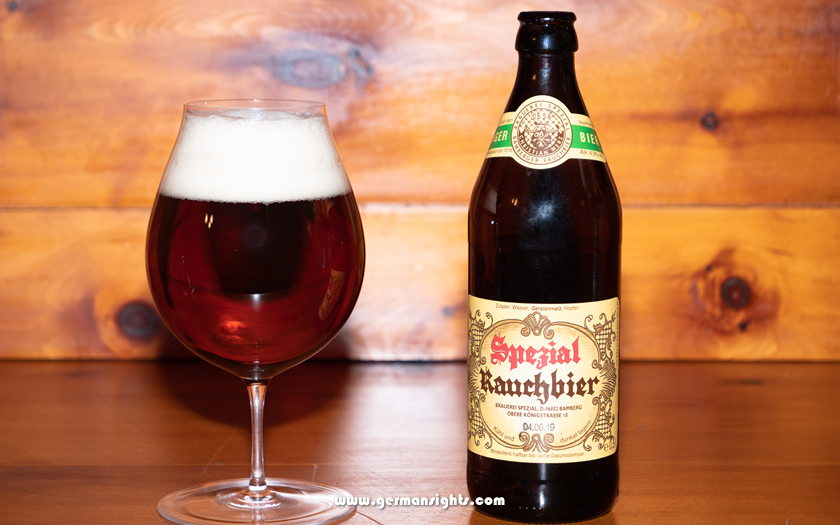 The smoked Rauchbier of Bamberg

Bamberg once had 68 different breweries and the art of brewing can be traced back to the 11th century in the city.

In those days, it was the monks who were granted the brewing rights and, as the monks suggested that everyone should have their daily ration of beer, the population became good customers. In the 15th century, every inhabitant averaged around 440 litres a year.

In these more health-conscious days that figure has shrunk a little bit but still stands at an impressive average of 280 litres.

The Bamberger speciality of 'Rauchbier' (smoked beer) comes from drying the malt over an open fire, usually using beechwood.

The Franconian Brewery Museum is located on the Michaelsberg and is open Wednesday to Friday in the afternoon and on the weekends from 11.00 in the summer months.
Website: www.brauereimuseum.de

Bamberg's sizeable tourist office is located on the 'island' on the edge of the old town area above one of the major underground car parks. It is open all year round - apart from some major religious festivals - with slightly shorter opening hours at weekends and on minor public holidays.
Website: www.bamberg.info