Friedrichshafen is one of the most important German towns on Lake Constance, with its nearby airport and rail connections acting as a transit hub for visitors to the area.

But, even though it is a relatively new creation, the town of just under 60,000 offers plenty of sights of interest within its borders.

As with most of the towns along the lake, the historic monuments are clustered along the shoreline. Friedrichshafen has a long lakeside promenade stretching from the twin towers of the castle church through to the harbour and the old town. 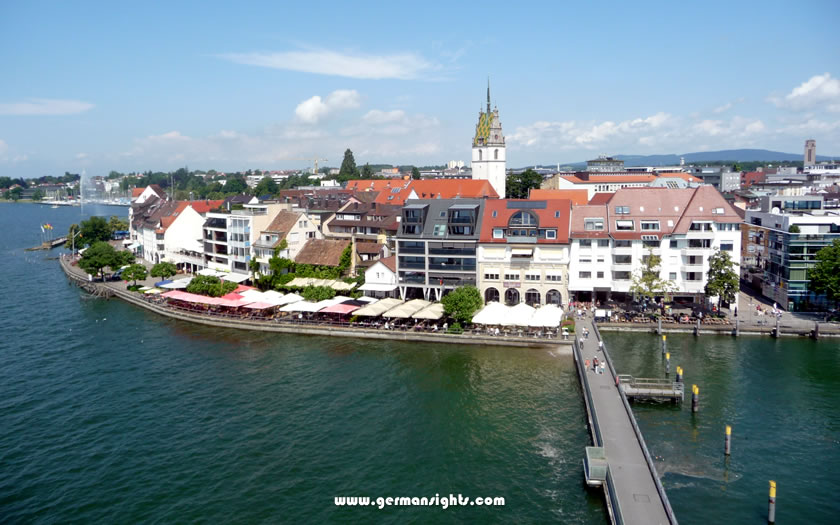 Friedrichshafen is still a town with important links to the aviation industry and the Zeppelin Museum on the lake and the Dornier Aircraft Museum near the airport showcase the development of air travel.

More information about places to stay both in the town and out at the airport are available on our Friedrichshafen travel page:
Friedrichshafen Hotels & Travel

The history of Friedrichshafen actually only dates back to the Napoleonic Wars of the 19th century.

The original settlement of Buchhorn in this location had been granted to the independent state of Württemberg in 1810 - previously it had been part of Bavaria.

Buchhorn had been a prosperous free Imperial city in the Middle Ages, benefiting from its position at the centre of the trade routes around Lake Constance. 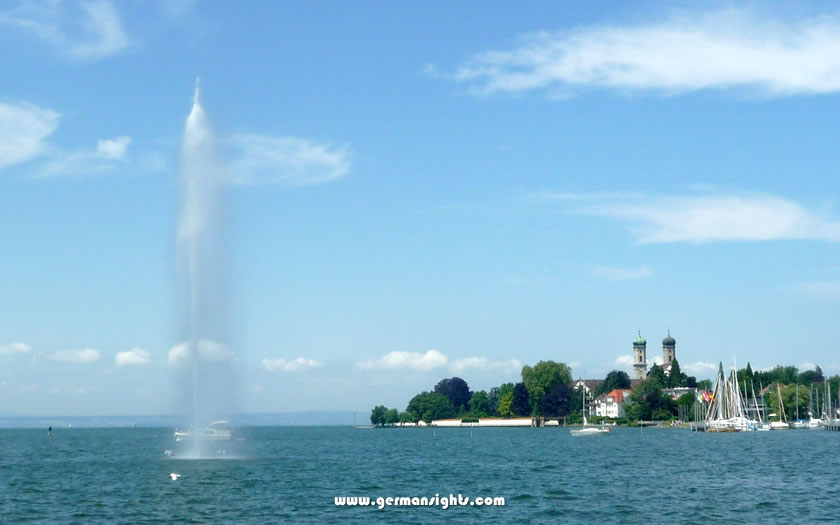 The fountain in Lake Constance near Friedrichshafen

Originally founded back in the 10th century, Buchhorn was one of the transit points for trade routes from Italy over the Alps. It received its town charter in the 13th century and shortly afterwards became a free imperial city (a 'Reichsstadt') in the Holy Roman Empire.

Although the town became prosperous from its merchants, it also then became a target during uprisings and wars. Buchhorn was attacked and plundered numerous times before the era of Napoleon.

It was however the era following the French Revolution which put paid to its independence. The last of the trade routes disappeared and it lost its status as an independent city, being granted first to Bavaria and then to Württemberg.

King Frederick I of Württemberg visited the town in 1811 and ordered that it be merged with Hofen, the area around the current Schloss Friedrichshafen. The new town was to be known as Friedrichshafen ('Frederick's Harbour') and to act as Württemberg's port and trading centre on Lake Constance.

The town became a fashionable place to stay with the Württemberg royal family using the former Hofen Abbey (see lower) for their visits and the 19th century saw the start of industrial development following the connection of the first rail line.

Of course, the main industry connected to Friedrichshafen was the Zeppelin airship production (see lower). The increasing production of rigid airships led to other companies settling in the area and the town was soon an engineering hub for the aviation and automobile industries.

Because of this it was a major target for bombing raids in the Second World War, with two-thirds of Friedrichshafen being destroyed. The population has tripled since the end of the war and it is once again an important location for engineering plants, as well as being a popular location for trade fairs and tourism.

The 'castle' of Schloss Friedrichshafen on the shores of Lake Constance is actually a former Benedictine priory.

Kloster Hofen, as it was known, was originally built in the 11th century but the present buildings date back to the 17th century.

The abbey and the neighbouring church were involved in the secularisation of the Napoleonic era and changed hands between Nassau, Austria and Bavaria before eventually being granted to Württemberg. 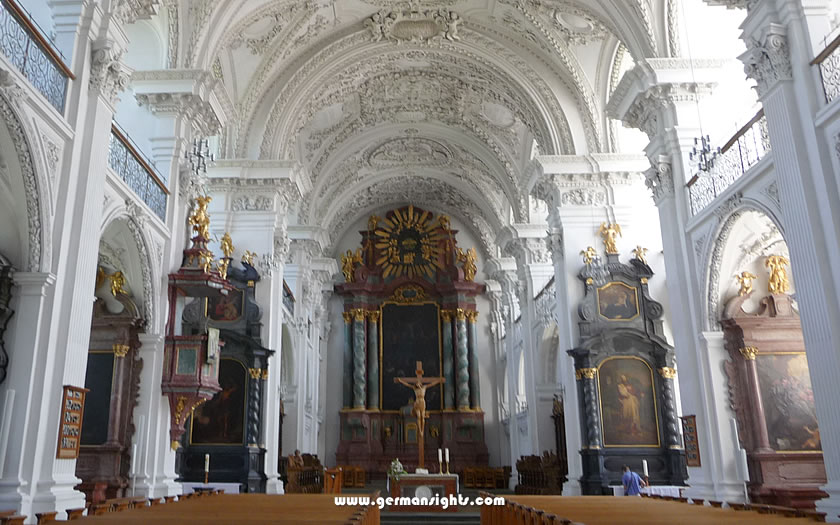 The interior of the Schlosskirche church, Friedrichshafen

The priory became the summer residence of the Württemberg royal family. It was damaged by a bombing raid at the end of the Second World War and has subsequently been restored and is still owned by the Count of Württemberg.

The neighbouring church, like the nunnery, was rebuilt in the Early Baroque style after being burnt to the ground in the Thirty Years' War. Its twin towers are one of the symbols of Friedrichshafen and it serves as the parish church for the Evangelical congregation of the town.

Count Ferdinand von Zeppelin is possibly the most well-known inhabitant of Friedrichshafen, with his influence still being felt on the town to this day.

The Count was actually born in Konstanz on the other side of Lake Constance. He followed in family tradition by joining the military and observed the uses of tethered balloons during the American Civil War and the Franco-Prussian war.

The first idea for the rigid airship which later bore his name was written in his diary in 1874.

The statue of Count Zeppelin, Friedrichshafen

Patents for his airship designs were granted in the 1890s but it was not until the turn of the century that the first went into production (not at this time in Friedrichshafen).

Although the experiences of the first airships were decidedly mixed, public and government interest grew in the concept. When one of the early zeppelins was wrecked on a test flight a public subscription in support of the Count's work raised millions of German marks and allowed him to set up a manufacturing company and a Zeppelin foundation.

The company produced numerous airships for both civil and military purposes, with the zeppelins being used by both the army and navy during the First World War. The results of their efforts, either in observation or in bombing raids, were questionable but they had an additional value in propaganda.

Count Zeppelin had died in 1917 but the success of the airship production facilities had led to related companies being established around Friedrichshafen to provide parts for the zeppelins. These later developed into important engineering companies in their own right.

Following the First World War, Germany was forbidden to construct any more airships and those still existing were handed over to the victorious allies as part of the reparations.

An order from the USA for a rigid airship led to the resumption of production and the 1920s were seen as the highpoint of the company, with trips taken around the globe. However the upswing was suddenly stopped with the Hindenburg disaster in 1937, with the live radio commentary of the airship erupting into flames spelling the end of any commercial use of zeppelins.

The engineering factories in Friedrichshafen made important contributions to the German war effort in the Second World War, especially in the fields of radar and rocketry, and were heavily bombed towards the end of the war.

The Zeppelin Foundation, financed by the profits from the Zeppelin holding company, was signed over to Friedrichshafen and the income used to encourage the revitalisation of the engineering industry in the town.

Nowadays it is an important part of Friedrichshafen's social life, providing the funds behind the Zeppelin University, for example, or various cultural initiatives.

In the meantime, ZF Friedrichshafen AG - nearly wholly-owned by the Zeppelin foundation - has become one of the largest car parts manufacturers in the world.

The foundation is also a shareholder in the companies which have been producing airships since the 1990s and which can be seen regularly around Lake Constance (now smaller and filled with helium rather than hydrogen). Passenger flights around the lake or further afield are offered on a regular basis.

The Zeppelin Museum on the lakeshore is also one of the initiatives sponsored by the foundation. It is open daily in the summer months (closed on Monday in the winter) and, as well as temporary exhibitions, has a substantial collection devoted to the history of airship travel.
Website: www.zeppelin-museum.de

The Friedrichshafen Tourist Office is situated just off the main street in the square in front of the main railway station. It is open Mon-Fri and Saturday morning in the summer and from Mon-Thur and on Friday morning out of high summer season.
Website: www.friedrichshafen.info