Where is Ansbach in Germany?

Ansbach is a small but attractive town in the Middle Franconia region of Bavaria in southern Germany. Although nearby Nuremberg is much larger and economically powerful, Ansbach remains the administrative capital of the region.

It is also home to the relatively new Ansbach University of Applied Sciences and to various garrisons for United States military personnel.

It was once the capital of a free and independent principality within the Holy Roman Empire and what remains of this medieval prominence can be seen in the pedestrianised area of the old town, with the churches and towers making Ansbach a good destination for a day visit.

It was ruled by a Margrave, and the Ansbach Residence and the Orangery are two of the historic sights to see in the town.

Some visitors also like to use it as a base for the area, as it has good connections to the Nuremberg region and across to the towns at the northern end of southern Germany's Romantic Road route. 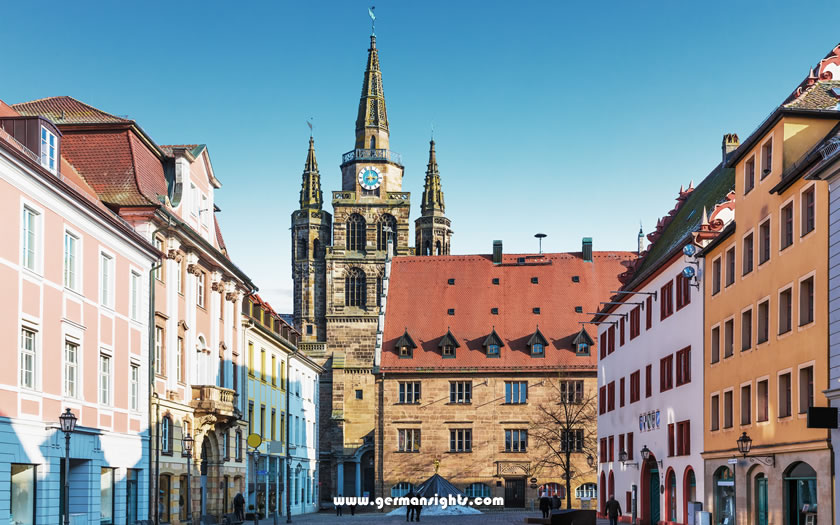 The former Margravial church of St Gumbertus in Ansbach

Ansbach has a small but decent choice of hotels and apartments. More details about what is available and how to get to the town by car or public transport can be seen on our travel page:
Ansbach Hotels & Travel

Ansbach is the site of settlements from different Stone Age eras, according to the archaeologists.

The first recorded settlement, however, was the establishment of a Benedictine monastery in the middle of the 8th century.

The town itself was first mentioned some centuries later with the building of a parish church and the charter was granted in the 13th century. The name Ansbach is thought to come from a corruption of the local name for a stream.

Ansbach - officially an independent margraviate with voting rights in the assembly of the Holy Roman Empire - was for centuries ruled by part of the important Protestant branch of the Hohenzollern dynasty. This house eventually formed the state of Prussia and became the first German Emperors after the unification of Germany in the 1870s.

For a long time the town was not known as Ansbach - after the above-mentioned stream, locals called it Onolzbach - and it was not until the 18th century that Ansbach became the more popular name. 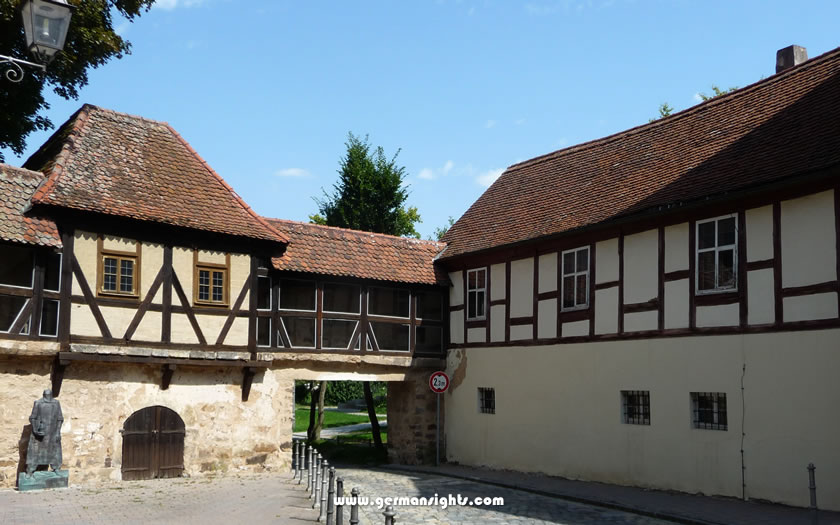 The remnants of the city walls in Ansbach

Ansbach came into Hohenzollern hands in the 14th century and, for a while, was the official seat of the Franconian branch of the family. This lasted until the family was granted the rule of Brandenburg and made Berlin their capital, leaving the control over Ansbach to less important members of the family.

The town had become quite famous for its faience porcelain by the 18th century and the Residence Palace and Gardens were built around this time.

In an unusual military episode, the Margrave of Ansbach (still an independent unit) sent 2500 troops to fight in the American War of Independence on the side of the British. Only 1000 eventually returned on the victory of the American forces, with some 400 having been killed in action and the rest deciding to settle in the American colonies.

Towards the end of the 18th century the Margrave of Ansbach decided to emigrate to the UK and the province was taken over by Prussia. It was granted to Bavaria during the turmoil of the Napoleonic Wars and has remained part of the state ever since, being absorbed into Germany during the unification process in the 19th century.

Nowadays it is the administrative capital of the Middle Franconia region in the west of Bavaria, despite being much smaller than three other towns in the area. Ansbach is home to over 40,000 people and host to a nearby US Army base.

The Story of Kaspar Hauser

The story of Kaspar Hauser is a famous identity mystery in Germany, in certain ways similar to the intrigue and interest in the true identity of Jack the Ripper in the UK.

Hauser was a young teenage boy who appeared in Nuremberg in the 1800s. He spoke only a few words and had a letter with him which claimed that he had been fathered by a cavalryman from the local regiment, had been raised near the Bavarian border in a house which he never left and now wished to be a soldier like his father. 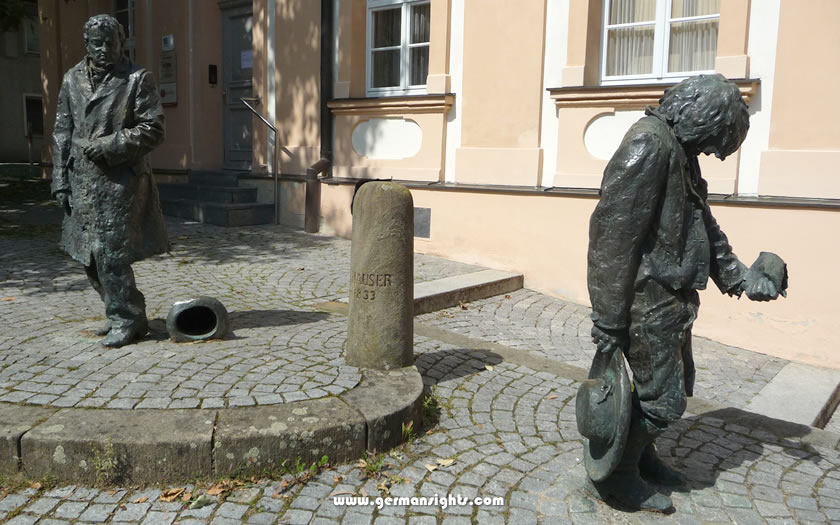 The statues of Kaspar Hauser in Ansbach

He was imprisoned as a vagabond and, during his time in the cell, claimed that he had been raised in darkness and only fed bread and water. Once he could stand and walk and repeat the phrase "I want to be a cavalryman like my father" in an old Bavarian dialect, he was brought to Nuremberg.

Many believed that Hauser was a conman but there was a lot of interest in his possible background. He was adopted by the city of Nuremberg and cared for by a local schoolteacher.

One day he was discovered bleeding from a head wound and claimed he had been attacked and threatened by the masked man who raised him. There were a number of subsequent theories that he had a noble Hungarian background or was related to the ruling family of Baden. Others however believed that he was an outright liar.

His cause was taken up by the British Lord Stanhope, who eventually tired of the case and transferred his care to an Ansbach teacher. In 1833 he came home with a cut to the chest, inflicted, he said, by an attacker in the Court Gardens and with a purse with a mysterious note in mirror writing.

Hauser died of his wound some days later and was buried in Ansbach. The mystery of his birth and death inspired German writers of the late 19th and early 20th century and the potential connection to the minor royalty of Baden was enough to keep the mystery of interest to subsequent generations.

The statues of Kaspar Hauser (see photograph) are located on a street corner just outside the historic city centre.

The Hofgarten and Residence in Ansbach

The Ansbach Residence and Court Gardens were built in the early 18th century as a palace for the ruling margraves. The buildings were constructed in the Viennese baroque style of architecture and the Residence nowadays serves as the seat of government for Middle Franconia.

The Residence itself was constructed on the site of earlier buildings, a castle with a moat built in the 15th century and a Renaissance palace from the 16th century, parts of which can still be seen today. 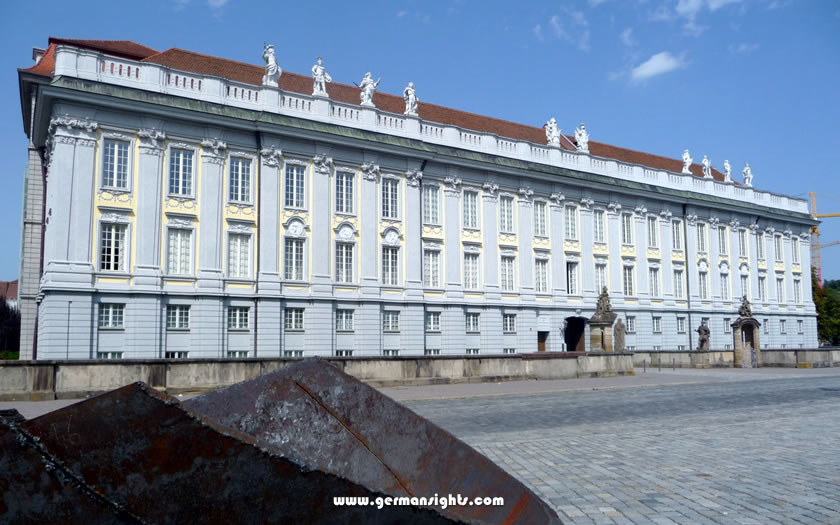 The Residence palace in Ansbach

The neighbouring Orangerie and Court Gardens were built slightly later in the 18th century, again on the site of previous versions.

The costumed Rococo Festival is held every year in July to commemorate the era of the ruling margrave who constructed the Residence and Orangerie.

The Residence also hosts a collection of porcelain and faience produced in the area as well as ceilings painted in the rococo style and is open from Tuesday to Sunday.
Website: www.schloesser.bayern.de

The tourist office is located near to the parish church of St Gumbertus. It is open all day Monday to Friday with more restricted hours on Saturday.
Website: www.ansbach.de