Ottobeuren is a pleasant town located not far from Memmingen in the Bavarian Allgäu region.

Its major landmark is the historic Ottobeuren Abbey, located at the edge of the central town square and these days also popular for classical music concerts.

But the area is also the birthplace of one of the founder of one of the popular health movements in the German-speaking world - the Kneipp method of therapy. 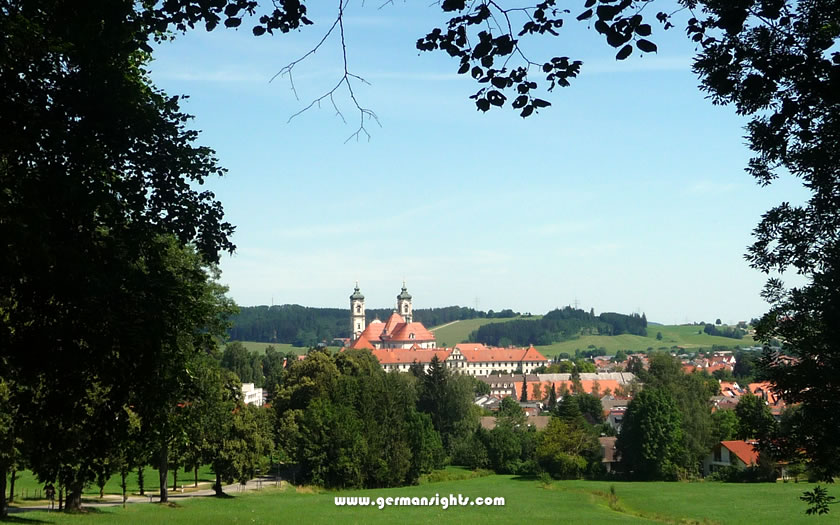 Ottobeuren abbey near Memmingen in Bavaria

The abbey was founded by the Benedictine order in the 8th century, one of a number of surviving important religious buildings in Bavaria which can date their history back to those times.

The early history of the monastery appears to have been somewhat of a rollercoaster, with enthusiastic abbots who installed reforms and set up centres for writing and, later, printing and the grant of the 'Imperial Abbey' status (which essentially gave the abbot the rights of an independent state subject only to the Emperor, including the right to raise taxes from the surrounding villages).

But the abbey also suffered from financial instability and the frequent central European wars. The 18th century, with a period of peace and prosperity, meant that the institution could start to bloom and the imposing Baroque complex dates from this period.

Ottobeuren was taken into government hands during the Napoleonic era and only became a religious institution again in 1835 (as a priory) and in the early 20th century it regained its status as an abbey.

Ottobeuren Abbey is these days also well-known for its series of classical music concerts held every Saturday in the summer months, which started after the Second World War and have attracted prominent conductors and musicians.

The abbey complex is also part of the Upper Swabian Baroque route, a self-drive tour which takes in some of the major buildings of that architectural era in places such as Ulm, Ravensburg, Lindau and Memmingen.

Sebastian Kneipp was a parish priest in the 19th century who grew up in a hamlet (Stephansried) over the fields from Ottobeuren. After a bout of tuberculosis, he turned to hydrotherapy (water treatment) and ascribed his recovery to daily dips in the freezing Danube river at Dillingen.

Water treatment already existed as a therapy, but Kneipp started to popularise his ideas, especially the concept of walking in cold water (which is now at the core of visible Kneipp therapy in many Bavarian and Tyrolean resorts).

The ideas were controversial and he was taken to court a number of times by medical professionals who accused him of practising quack cures without any formal license.

However the treatment and the books that Kneipp wrote about his theories became more popular, especially with the German nobility and upper classes.

Kneipp therapy grew into a movement based on the water treatment but also with ideas of healthy eating, the use of healing herbs and movement (especially barefoot walking or running) - a forerunner of today's concepts of complementary medicine and a 'whole body'.

Today, the Kneipp association counts more than 200,000 members and the typical footbaths and arm basins with running water can be seen in many towns and villages in central Europe. Ottobeuren is an official Kneipp 'Kurort' (a kind of spa).

Map of Accommodation in Ottobeuren