Meissen is a small town on the Elbe river downstream from Dresden which is world-famous for its production of porcelain.

It is also known as "the cradle of Saxony" as it was from here that the Wettin dynasty established control of the area that later became the Free State of Saxony.

As well as the stunning position on the river, with its historic centre at the foot of the castle and cathedral hill, it is also part of the Saxon Wine Route which runs from south of Dresden through to the villages north of Meissen. 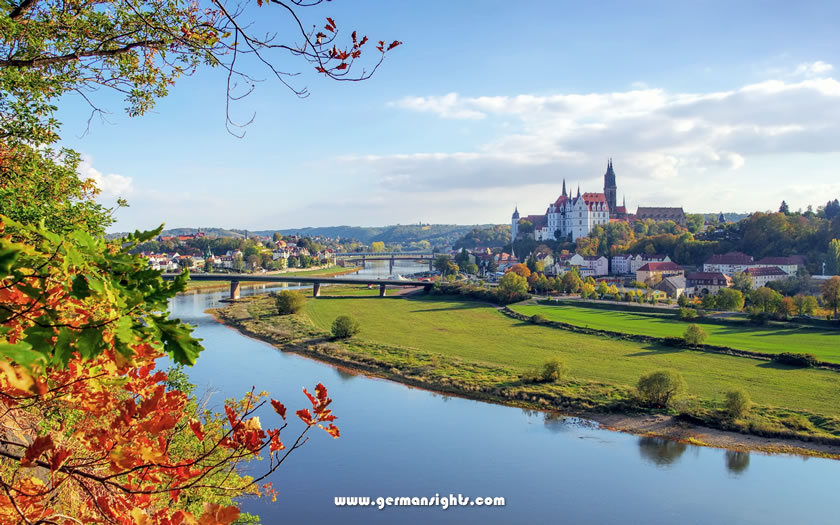 View of Meissen on the Elbe river

Meissen, or Meißen as it is written in the German alphabet, is easily reached on the regional train services from Dresden as well as via the Elbe river cruises. More about transport options and accommodation details can be seen on our travel page:
Meissen Hotels & Travel

Meissen was originally a small settlement which grew up in the 10th century around the fortifications on the Albrechtsburg castle site.

Originally known as Meisa, it had been the home of the bishops of the diocese of Meissen since that time and the original cathedral building on the site of the current structure is reputed to date from this period.

Meissen was given its town charter in the 14th century. Between the 10th and the 15th century it was the capital of its own region (the 'March' or 'Margraviate' of Meissen). 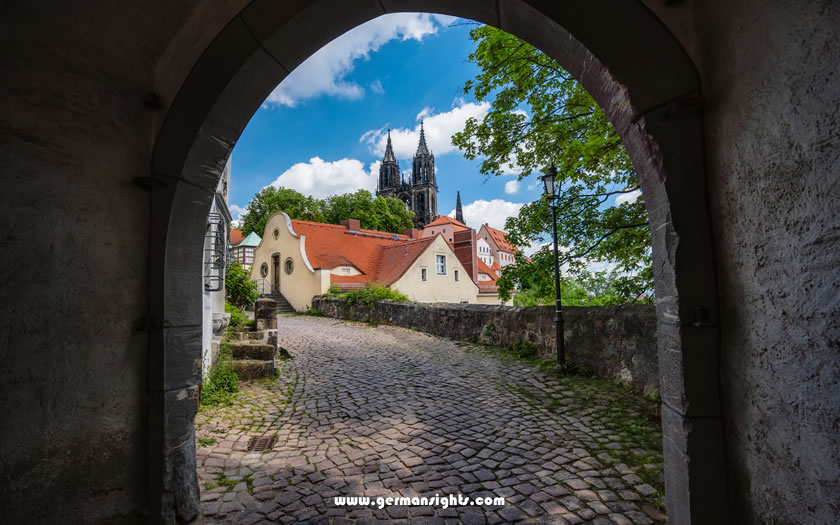 During the 15th century, the Duchy of Saxony-Wittenburg was added to the ruler's lands and what eventually became the states of Thuringia and Saxony were created by splitting the lands between two branches of the Wettin dynasty. It is for this reason that Meissen is sometimes known as 'the cradle of Saxony'.

The hilltop location of the Albrechtsburg castle and the Meissen cathedral make them visible from most points in the city. The steep hill was fortified much earlier but the construction of the Albrechtsburg dates back to the 15th century and the Wettin rulers. Although it looks like a stronghold in a fairly impregnable position, it was actually built as a residence for the Wettins rather than a fortification.

Unfortunately, shortly after it was finished, the ruling family moved their residence to Dresden and, having been badly damaged during the Thirty Years' War, it stood empty for years.

In 1710 it became the location of the new State Porcelain factory (see lower) until the late 1800s, when renovations on the old buildings started. It was used as a storehouse for works of art from Dresden and the surrounding area during the Second World War and, after German reunification, it has been turned into a museum.

The present-day cathedral, dedicated to St John and St Donatus, had its origins a little bit earlier than the Albrechtsburg, with construction having started in the 13th century. However, various parts of the building date from completely different periods and architectural styles, with the two Gothic spires only being finished at the start of the 20th century.

Originally a Catholic cathedral, it has been the bishop's residence of the Protestant Lutheran church in Meissen since the days of the Reformation. (The Catholic diocese of Dresden-Meissen is now based in Dresden.)

Meissen survived the Second World War relatively unscathed and became part of East Germany. Since German reunification much work has been put into the restoration of the old town at the base of the Albrechtsburg and Meissen is now one of the major tourist destinations in Saxony.

Meissen's connection with porcelain started at the beginning of the 18th century with a fraudulent and failed alchemist by the name of Johann Friedrich Böttger.

Originally an apprentice to a Berlin chemist, he studied the secrets of the 'Philosopher's Stone', which was supposed to be a mystical substance which could, amongst other things, convert metals into gold.

Supposedly he successfully transformed silver into gold in front of the chemist and other witnesses and the news of his achievement spread to the court of the Prussian King who ordered that he be brought to his Berlin castle. 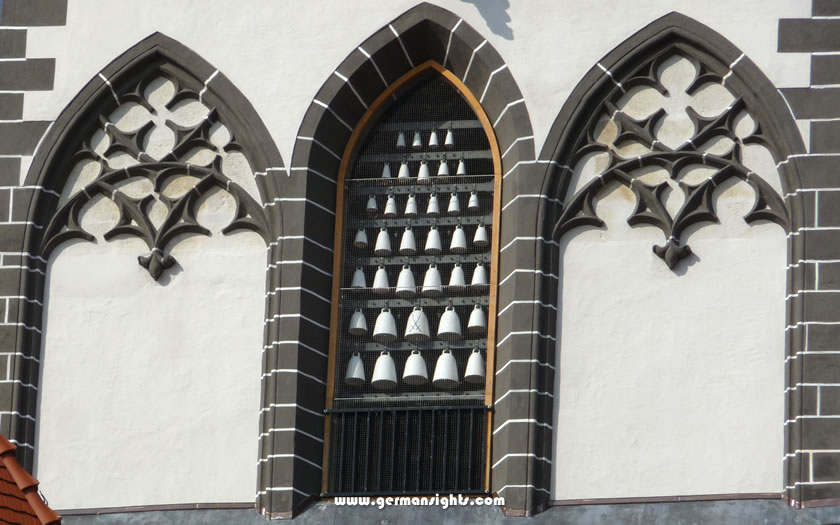 Porcelain bells on the Frauenkirche in Meissen

He appealed for protection from the Elector of Saxony and jumped from the frying pan into the fire. Friedrich Augustus, the Elector, had Böttger placed under guard and ordered him to carry on his researches into the 'Philosopher's Stone'. A research team was assembled to assist him and also to study the natural elements available in the Saxon mountains.

After a failed attempt to flee the 'protective custody' of the Saxon ruler, Böttger was ordered to produce certain substantial amounts of gold by specific dates.

As the financial noose tightened around his neck and his attempts to produce gold came to nothing, he was ordered to help out with the research of one of his supervisors and colleagues, who had been experimenting with porcelain production.

Together they managed to successfully recreate a type of porcelain which until then had only been produced by the Chinese (known as 'hard-paste porcelain') and which was tremendously expensive to import.

In 1710 the Elector of Saxony announced that the secrets of porcelain manufacture had been discovered and opened a factory in Meissen on the Albrechtsburg.

Continuous improvements in production and further discoveries, such as the use of enamel paints, led to the Meissen porcelain becoming extremely popular amongst the rich.

The famous trademark, two crossed swords, was adopted in 1720 and is one of the oldest European trademarks still in use. 'Meissen' with the non-Germanic spelling (without the SZ symbol 'ß') is a registered trademark when used in conjunction with porcelain.

From the mid-1700s onwards the Meissen products started to suffer from competition from factories in Sèvres and Vienna but still remained popular. As well as tableware and larger statues, Meissen is also associated with the production of figurines such as the well-known Dresden shepherdesses.

The factory in the Triebischtal part of Meissen is again owned, as when it started, by the Free State of Saxony. The Museum of Porcelain on the site is open all year round apart from the Christmas period.
Website: www.porzellan-museum.com

The Meissen Tourist Office is located in the Marktplatz in the old town, opposite the Frauenkirche church. The office is open seven days a week in the summer season. In the winter the office is closed on Sundays and has slightly shorter opening hours during the other days.
Website: www.touristinfo-meissen.de