Freising is one of the most historic towns in Bavaria and is host to an important cathedral and the oldest working brewery in the world.

Situated on the Isar River and close to Munich, it is also within a short distance of Munich Airport, which makes it a good option for those looking for an overnight stop at the beginning or end of their stay in Upper Bavaria.

The historic town square of Freising

As might be expected, Freising has a decent range of accommodation. More details about the options and directions for travel to the town are available on the travel page:
Freising Hotels & Travel
or check the available accommodation on the map below.

Map of Accommodation around Freising

The origins of Freising date back to the Stone Age and important settlements from the time of the Bronze Age have been discovered on the hill where the cathedral now stands.

The current settlement is thought to stem from the 8th century with the construction of a palace and chapel for a local ruler. This makes it the oldest settlement in Upper Bavaria.

The town is also connected to St Corbinian, a French monk sent as a missionary to Bavaria around that time, who became the first bishop of Freising and set up an abbey on the nearby Weihenstephan hill. 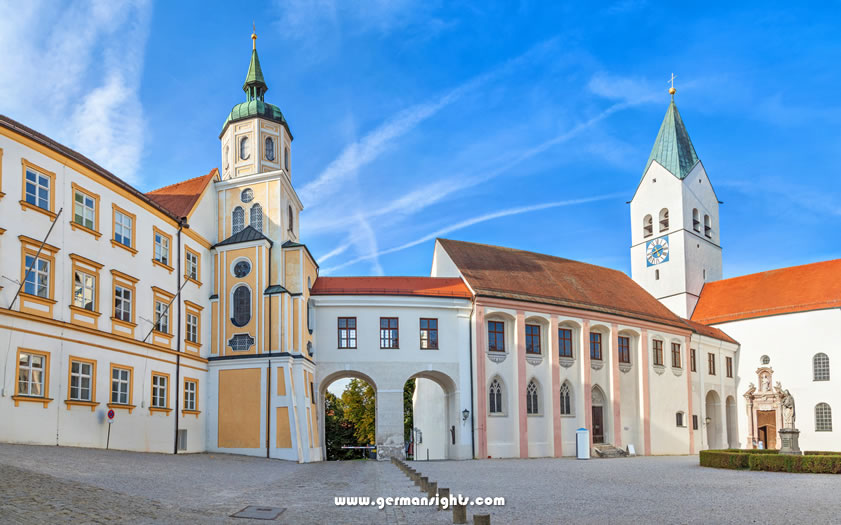 The cathedral in Freising

The coat of arms for Freising, a bear carrying a pack, comes from the legend of St Corbinian, who apparently ordered the bear to carry his load when his horse was killed during one of his journeys.

Freising, with its important strategic position on the Isar and its income from tolls on the river traffic as well as its religious importance, was one of the most prominent settlements in the southern part of Bavaria during the early Middle Ages.

It received rights to hold a market back in the 10th century and was ruled by the prince-bishops of the town for centuries, despite losing its regional prominence to the upstart nearby settlement of Munich in the centuries following the move of the Isar bridge in the 12th century.

Munich was forced to pay financial damages to Freising in recompense (which lasted into the 19th century!) but the town never recovered its former glory.

Instead under the prince bishops it became a centre of learning, religion and culture and profited from trade along the river, rather than those crossing it.

The reign of the prince bishops lasted until the secularisation in Napoleonic times. Munich became the seat of the diocese and the land once controlled by the religious authorities passed to the Bavarian state.

The prosperity of Freising became inextricably linked with the rise of Munich, with many residents working in positions linked to the Bavarian capital. The building of the new Munich airport nearby in 1980 also helped the local economy, with nearly 35,000 employees now working there.

The tourist office is situated in one of the buildings behind the parish church (not the cathedral!) and is open all year from Monday-Friday and on Saturday mornings:
Website: www.freising.de

Weihenstephan is a hill to the west of Freising where, it is believed, St Corbinian once caused a spring to flow by striking a rock with his staff. It became the site of an important Benedictine monastery which was built in the 11th century and eventually closed in the early 19th century.

The monks had an influence which lasts until this day, though, as they founded what is claimed to be the oldest brewery in the world. (It must be pointed out that the abbey at Weltenburg near Kelheim would dispute this claim!)

The monks were granted the right to brew beer in 1040, although it is believed that hops were being grown on the hill much earlier. It is likely that beer was being brewed as well, although without the permission of the rulers. 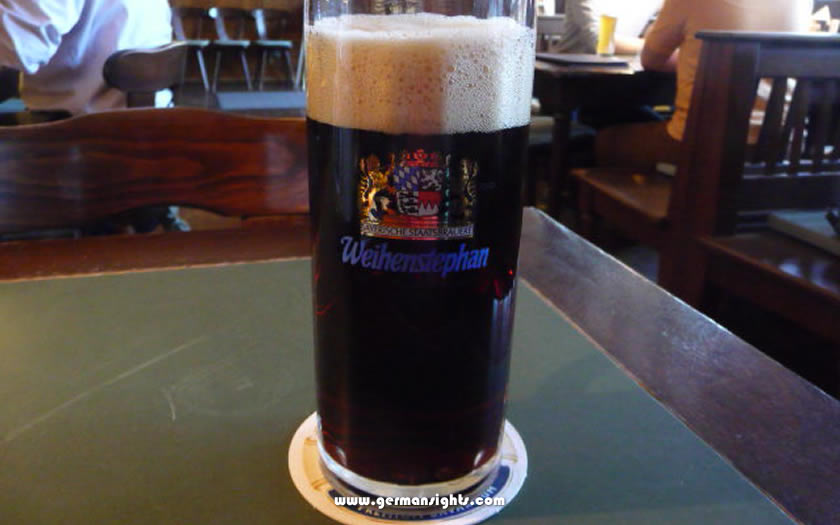 Despite various invasions from Huns, Swedes, French and Austrians and blazes which destroyed the monastery four times, the brewery has lasted through to this day. It was transferred to the Bavarian state at the start of the 19th century and the brewing college moved here in the middle of the century.

Nowadays Weihenstephan is still a Staatsbrauerei (publicly-owned brewery) and the brewery school has become part of a 'green' learning centre with more than 3000 students studying environmental topics, forestry and agriculture as part of the Munich Technical University.

The brewery produces 12 beers, including the traditional seasonal strong beers, and offers tours around the facilities.
Website: www.weihenstephaner.de