The southern town of Passau near the Austrian border is one of Bavaria's most popular tourist destinations.

As well as being a beautiful town with a stunning setting in the middle of three rivers, it is also a stop for those taking a Danube river cruise all the way to Vienna and beyond.

And the favourite version of the renowned bike route along the Danube also lies between Passau and Vienna. 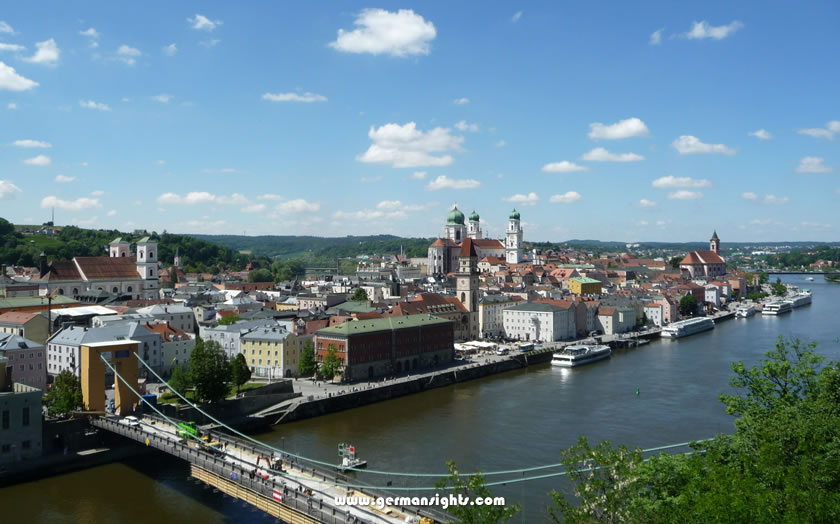 View over Passau from the Obere Veste

As a very popular tourist destination, Passau has a good choice of accommodation. Details of hotel and other accommodation and how to get to the town are located on our travel page:
Passau Hotels & Travel

Passau's situation at the junction of two major river transport arteries and trade routes led to a long history of settlement.

Archaeologists have found evidence of settlements dating back to 5000BC and the Celts had a fortification near the current town hall where they carried on a flourishing trade in salt and graphite.

The Romans, too, built fortifications here - their settlement was named 'Batavis' after a nearby Germanic tribe. 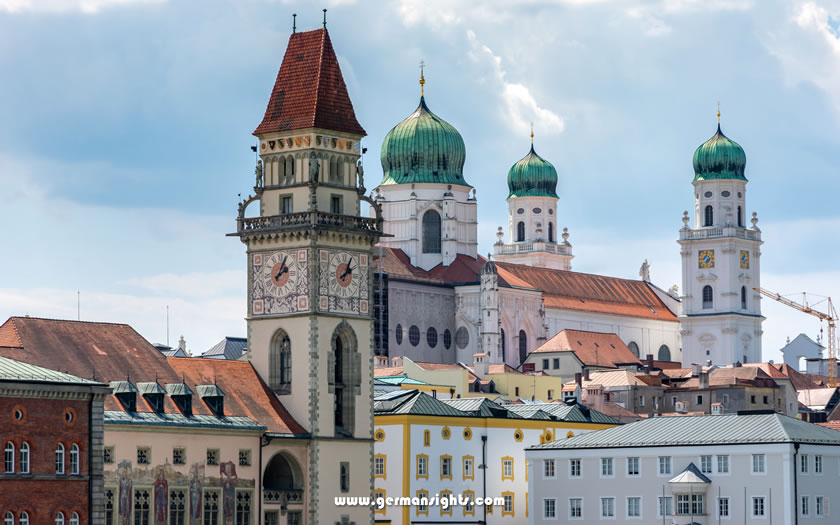 The old town hall and cathedral in Passau

Salt was the source of Passau's early prosperity - brought down from further up the Inn and Salzach rivers in present-day Austria, it was transported further into Bohemia to the north.

With the withdrawal and eventual decline of the Romans, the area was occupied by the Bavarii who strengthened the fortifications on the peninsula. By the eighth century Passau had its own bishop - the start of a close association between religious and worldly power in the city.

The town acquired its official charter in the 13th century and the castle above Passau, the Veste Oberhaus, was constructed at this time.

Like other settlements in this part of Europe, Passau was ruled by Prince-Bishops. Even though they were unpopular with the inhabitants, Passau became a wealthy city with the trade along the Danube and other industries which had set up in the area along the river banks.

At one point, the diocese of Passau stretched to Vienna and further into present-day Hungary. This influence led to political manoeuvring by the Hapsburg rulers in Austria and the Wittelsbach family in Bavaria which slowly diminished the geographical area ruled by the Prince-Bishops over the centuries.

Much of the current appearance of Passau is from the later Baroque era, caused by the massive town fire in 1662 which destroyed a quarter of all the buildings in the city and the subsequent rebuilding in the Italian style popular at the time. St Stephen's Cathedral in the old town is one of the largest Baroque churches to the north of the Alps.

The rule of the Prince-Bishops of Passau ended with the Napoleonic period and the secularisation at the start of the 19th century. During the same century Passau was linked to the main German rail network and became an administrative centre for the the Lower Danube region (which later became Lower Bavaria).

It was bombed in the Second World War in the vicinity of the railway station but the rest of the historic city remained relatively untouched from war damage. Nowadays, Passau is the second-largest city in Lower Bavaria and, as well as being an important tourist centre, is also the seat of a university.

The Veste Oberhaus is a castle complex which was built in the 13th century and continually expanded and improved as the fortified seat of the Prince-Bishops of Passau.

It is located on the opposite bank of the river Danube from the old town of Passau on the finger of land formed at the junction of the Danube and Ilz rivers. The Prince-Bishops used the Veste Oberhaus fortress not only as protection from external enemies but also from the population of Passau, who staged a number of attempted uprisings against their rule.

It is one of the world's largest surviving castle complexes and illustrates the history of fortification construction through the centuries. It is now a museum and exhibition centre. 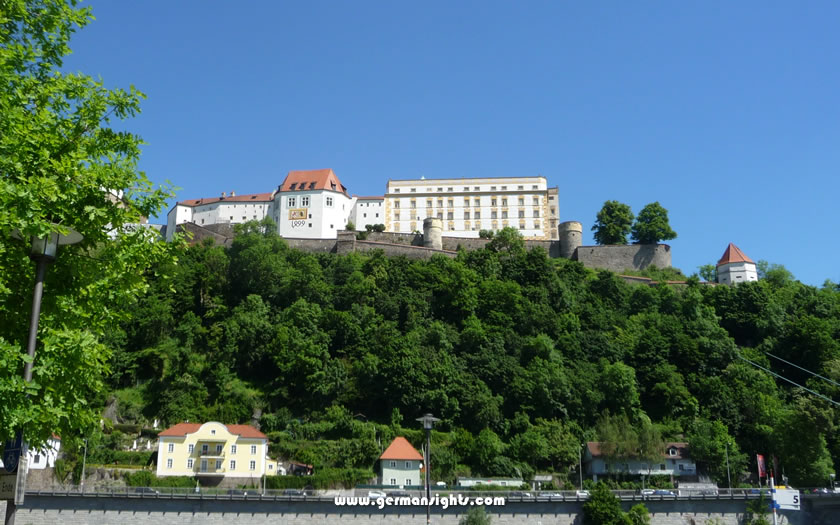 Although it was attacked many times over the centuries, it was never taken. It ceased its military role with the fusion of Passau into the state of Bavaria in the early 19th century. It became a military prison which also housed political prisoners and was known as 'Bavaria's Bastille'.

The fortifications were handed over to the city of Passau in 1932 and since the 1990s it has been used as a museum of city and regional history as well as housing regular exhibitions.

The museum is open from mid-March to mid-November. It can be reached via various paths from the city centre or by a shuttle bus up to the heights which leaves from the square in front of the town hall.
Website: www.oberhausmuseum.de

The City of Three Rivers

One of the names for Passau is the 'Dreiflüssestadt' - 'the city of three rivers' - as it sits at the important strategic junction of the Danube, Inn and Ilz rivers.

The tour guides like to speak of the colour of the rivers - the 'blue Danube' from the west, the 'green Inn' from the south and the 'black Ilz' from the north - and it is possible to see the division between the waters of the river Inn and the Danube quite clearly if the visitor walks to the end of the peninsula past the old town.

It must be said that although the boundary is quite distinctive the difference is more between a clearer and a muddier shade of brown! 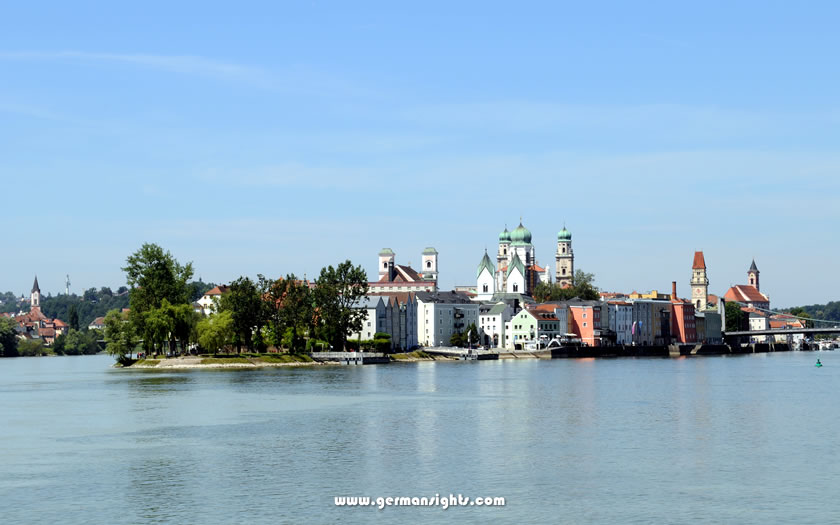 The rivers have of course had an important influence on Passau over the centuries. They formed the peninsula of land where the Roman fortifications were originally built and they enabled the prosperity of the town through the trade of salt, linen and grain.

And they have also wreaked their own regular disasters on the community, with the high water rushing downstream creating major floods through the years. A measure outside the New Town Hall shows the flood levels of various years - with the highest being in the 16th century but the next being in the relatively recent 2013 (the waters reaching up to the walls of the Veste Oberhaus - pictured above).

There are two tourist offices in Passau. One is situated opposite the railway station and the other is near the old town in the Rathaus building near the ferry mooring points. They are open all year round with slightly restricted opening hours on Sundays. The tourist office at the train station is closed on Sundays in the winter season.

A frequent walking tour is offered by the tourist office both for visitors from the river cruise ships and those who are travelling independently, as well as plenty of specialist options. Those not on a cruise ship can also take a day trip version of a Danube river cruise from private operators down at the cruise port with an 45-minute tour on the water.
Website: tourismus.passau.de