Erfurt is the capital of Thuringia and the largest city in the state. It is a road and rail transport junction and houses the state's only international airport.

Erfurt became wealthy in the Middle Ages through its position on the Gera river and important trade routes and the cross-fertilisation of cultures led to the German city becoming an intellectual centre with a prestigious university.

Martin Luther called Erfurt the 'city of towers' and its rich religious history can be seen today in the spires that mark the skyline. 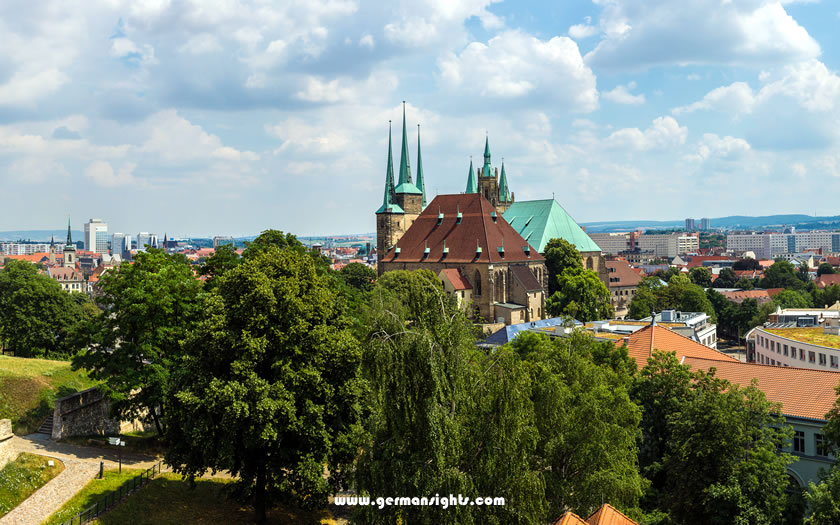 Erfurt cathedral and the church of St Severus

Erfurt has its own airport but it might not be the most convenient for visitors. The train station is within easy walking distance of the city centre. Find out more about transport options and accommodation details on our travel page:
Erfurt Hotels & Travel

The Erfurt region was first settled back in the Stone Age although the town itself was first mentioned in a religious document in the 8th century.

St Boniface, the missionary to the Germans, wrote that he wanted to create a diocese in Erfurt because it was an important heathen population centre. (Boniface was at the time the Bishop of Mainz.)

The official town charter was granted much later in the 15th century and, after a severe fire which destroyed much of the existing settlement, the castle fortifications were extended into a city wall - some of the remains of which can be seen today. 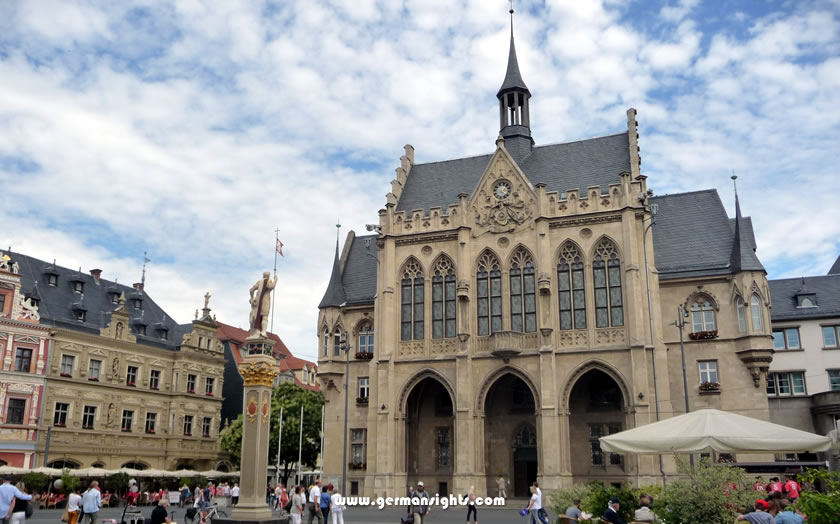 The town hall in Erfurt

Even as Erfurt was being properly fortified, it was starting a slow decline caused by the changing nature of the trade routes in the area and by the granting of trade fair rights to nearby rival Leipzig.

The 16th century was also a time of plague, with the Black Death visiting the city on numerous occasions, especially during the early part of the century.

This disruption coincided - or was even the cause - of civil unrest between the city's rulers and the population. The city had long fought the neighbouring mini-states in what is now Saxony and had been forced to pay 'protection money' to avoid any more fighting.

The continual blockades, the draining of the treasury through military expenses and the changes in commercial routes all meant that the city ended up dealing with uprisings from its own dissatisfied inhabitants.

During the Thirty Years War the city was occupied by Swedish troops and, when peace was finally declared, came under the control of the Electorate of Mainz. The massive fortress of St Petersberg was built during their rule.

Erfurt became part of Prussia during the Napoleonic era but was occupied by French troops. It returned to Prussian rule with the fall of Napoleon and later in the 19th century became an important engineering centre.

The fortifications were no longer needed in a unified Germany and some of them were broken down to provide housing for the increasing population. At the outbreak of the First World War, Erfurt could boast more than 130,000 inhabitants.

The city was hit hard by the Great Depression and became one of the military centres of the new Nazi government. It was bombed heavily during World War II and many of the historic buildings of the old town were destroyed, while 1600 civilians lost their lives.

A planned air attack to level the city was cancelled because of the rapid advance of US troops, who subsequently occupied the city. Erfurt was, however, handed to the Russians and became part of East Germany and the Thuringian capital in place of Weimar.

Nowadays the city is the centre of a thriving area with a population of more than 200,000.

Erfurt received an initial boost as a settlement by its strategic position on important trade routes between east and west.

The Via Regia was an imperial route (in the days of the Holy Roman Empire) which linked eastern Germany and Poland to the trading ports of Antwerp and Bruges, as well as the northern coast of Spain. 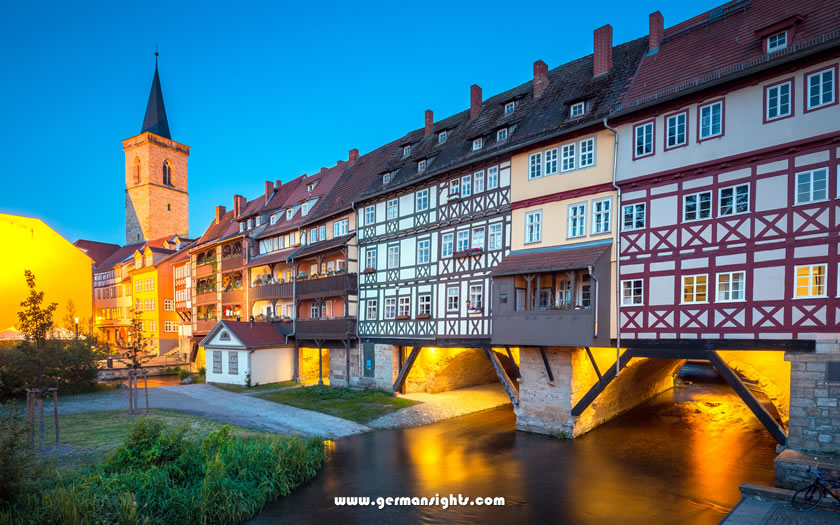 The famous Krämerbrücke in Erfurt

It was also close to the equally important Via Imperii, which took the north-south route from Innsbruck to the Baltic Sea and crossed the Via Regia at nearby Leipzig.

It wasn't just trade that made the routes important - pilgrims used them to travel to various holy sites (such as Santiago de Compostela in northern Spain) and essentially acted as a medieval tourist industry.

Erfurt was also a centre for woad production. A blue dye could be produced from the woad plant, important for dying clothes and thread for tapestries, and the city held one of the most profitable woad markets in the Middle Ages.

With the trade and pilgrim routes and the woad production, Erfurt grew into a city which was as important as locations such as Nuremberg and Cologne. The Merchants' Bridge (pictured above) dates from this time. The profits from the woad industry probably paid for the establishment of the renowned Erfurt University at the end of the 14th century.

Like many other cities in central Europe, Erfurt was badly affected by religious wars and repeated bouts of the plague. The colour blue eventually could be produced at less cost by using imported indigo and Erfurt suffered financially.

At the end of the 19th and beginning of the 20th centuries, Erfurt became a centre for mechanical engineering, as well as for seed production and horticulture. So much so, that the local nickname for a true-born Erfurter is a 'broad bean' ("Puffbohne")...

Erfurt played a prominent part in the Reformation and in the life of Martin Luther.

He first came to study at the famous university and later became a monk at the Augustinian monastery.

The city still uses Luther's famous quote in its marketing: "Erfurt is situated in the best location. It is the perfect place for a city." 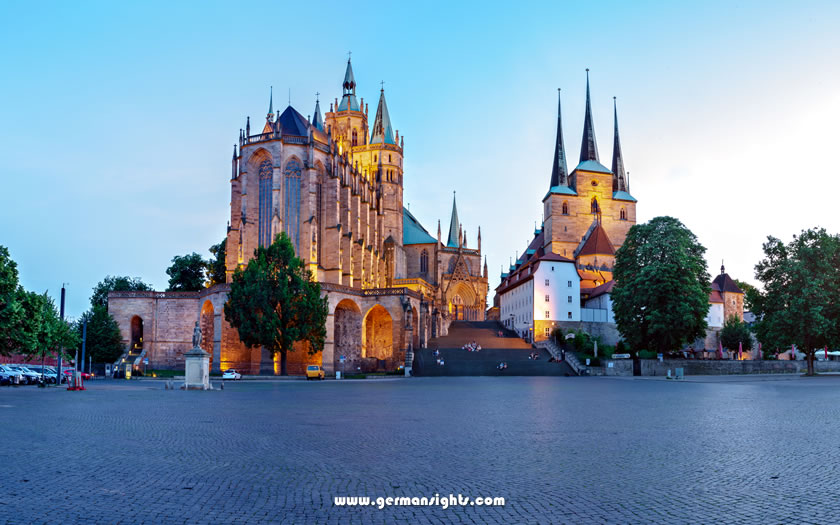 The Erfurt cathedral complex, where Martin Luther was ordained

Martin Luther first arrived in Erfurt to study the liberal arts. His four years at the university also included theology and then, at the wish of his parents, legal theory. He graduated with a master in philosophy.

The famous event that allegedly led to Luther becoming a monk took place in a field in one of the suburbs of Erfurt. Luther was walking from Mansfeld to Erfurt when he was caught outside during a violent thunderstorm. He swore to St Anna that he would become a monk if he survived.

Once the storm abated Luther made his way to the Augustinian monastery and applied for entrance. (The location of this incident in Stottenheim is now marked by a commemorative stone.)

Martin Luther was ordained as a priest in Erfurt Cathedral and left the city to study theology in Wittenberg. However, he frequently returned to Erfurt to preach in a number of the churches in the area (such as the university church of St Michael pictured above).

The Erfurt Tourist Office is centrally located in the Benediktsplatz in the old town. The office is open seven days a week with slightly shorter opening times on Sundays.
Website: www.erfurt-tourismus.de