Reit im Winkl is a small alpine village of just over 3000 inhabitants near the border with the Austrian Tyrol.

It is well-known for its winter sports - downhill and cross-country skiing - and for summer outdoor activities.

It is one of the villages on the German Alpine Road and the route from the Chiemsee and through to Ruhpolding is one of the most scenic stretches.

The village lives from tourism and thus has a good range of accommodation for those planning on a stay. More details about getting there and the choice of lodging are available on the travel page:
Reit im Winkl Hotels & Travel

The village, relatively isolated as it is in the mountains of Bavaria, is first mentioned in documents in the 13th century, although it is thought to have been founded earlier.

It remained for centuries a place of hard mountain labour, with farming and timber being the main source of income. 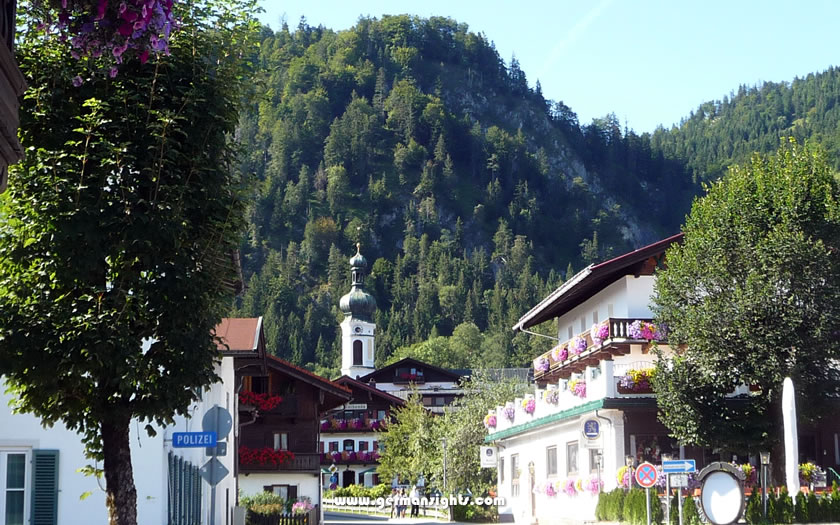 The symbol of the village is a jack (the 'Schellunter' - a picture card in a local game). According to local legend, when Napoleon was deciding how to partition his conquests in the early 19th century, everyone forgot about Reit im Winkl. When reminded, the rulers of the Tyrol, Salzburg and Bavaria played cards for it, with the Bavarian King winning with a jack.

Tourist started a little later the visit of a later Bavarian King in 1858 and the publicity around his journey led to increased interest in the village from around Germany.

The village was never connected to the local rail network, although the tourist authorities pushed for it, and the former Waldbahn (a narrow gauge railway between Reit im Winkl and Ruhpolding) was only used for transporting logs during its relatively short life in the 1920s.

With the no easy day-trip access, the village has retained its traditional culture, one of the reasons why tourism is so strong here. In the winter months, it is linked in to the Steinplatte ski area above Lofer in Austria and the area is renowned for its snowfall, attracting cross-country skiers and snowshoe enthusiasts.

The tourist office in Reit im Winkl is situated just outside the centre of the village on the road in the direction of the Chiemsee. It is open Monday-Friday and on weekends in season:
Website: www.reitimwinkl.de