Füssen is an attractive town at the foot of the Bavarian Alps near the Austrian border with the Lech river running through it.

It has an interesting historic centre and plenty of sights nearby - the world-famous Neuschwanstein castle and Hohenschwangau castle built by Bavarian King Ludwig II are just a short journey away near the neighbouring village of Schwangau.

The town is actually the southern end (or beginning) of the Romantic Road tourist route and makes a good stop-off point on the way along the German Alpine Road. 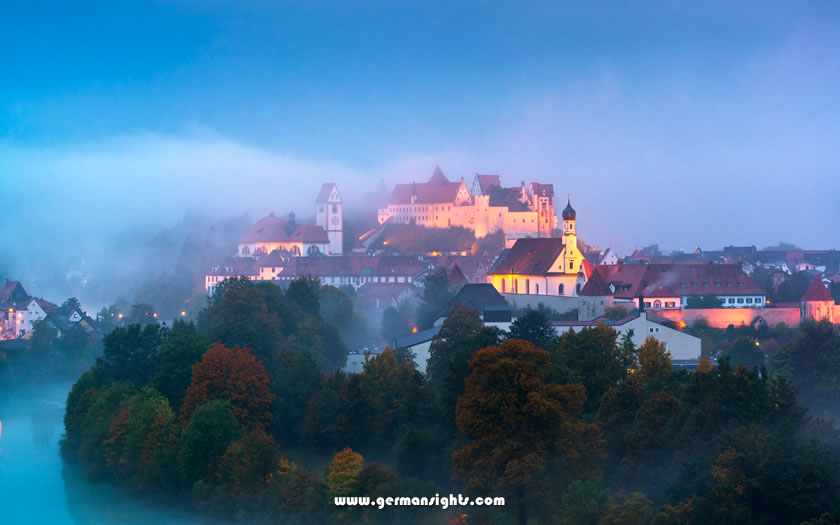 View over Füssen in southern Germany

Füssen is one of the last towns in southern Germany before the border with Austria. Transport information both north and south and details of hotel accommodation in the area can be seen on our travel page: Füssen Hotels & Travel

Füssen can trace its history back to the days of the Romans. As an important way station on the Via Claudia Augusta trade route, Roman legionaries were stationed here to guard the Lech river crossing.

The Romans called their settlement 'Foetibus' but later the name 'Fauces' was used meaning 'gorge' (in this case, meaning the Lech narrows and waterfall to the south of the town).

The current name of Füssen (also the word for 'feet' in German) was first used in the 12th century and the coat of arms for the town shows three joined legs (the 'feet' of the name). 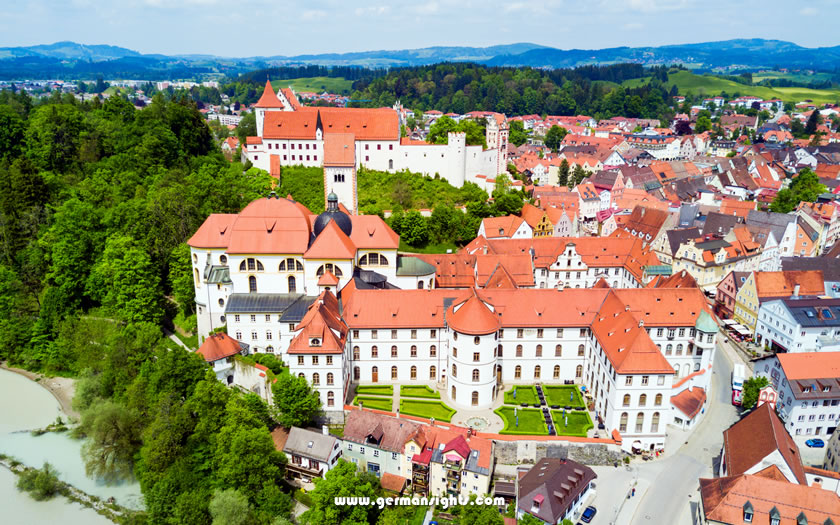 The Lechfall also boasts another, more legendary in nature, sight - supposedly the 'Apostle of the Allgäu' St Magnus leapt across the Lech in one bound while he was being pursued by heathens.

St Magnus, locally known as St Mang, arrived from the monastery at St Gallen and founded a church here which fell into disuse after his death. The Benedictine abbey of St Mang was ordered to be built later in the 9th century by the Bishop of Augsburg in memory of the saint.

Füssen received its town charter in the 13th century but, unlike several other similar settlements in southern Bavaria, it never received the status of an Imperial Free City (which would have meant that it had a great degree of independence and was only answerable to the Holy Roman Emperor) and remained for a long while under the control of the Augsburg rulers.

This lack of status didn't stop the Emperors (with their sizeable courts) coming to stay - the Emperor Maximilian, for example, stayed here around 40 times. The Imperial visits are now commemorated with historical parades in the town.

As it was with the Romans, the town of Füssen was an important trading centre in the Middle Ages but was badly affected by hostilities of the Thirty Years' War.

The Town Museum is located in the former Benedictine Abbey of St Mang in the heart of the old town.

The building is reputed to date from monastic quarters which were founded by St Magnus, a follower of the evangelising monks from Ireland who came to Central Europe in the 6th or 7th century.

The actual buildings consist of the Basilica, the Anna Chapel and the former monastery. The town museum is entered around the corner from the religious buildings. 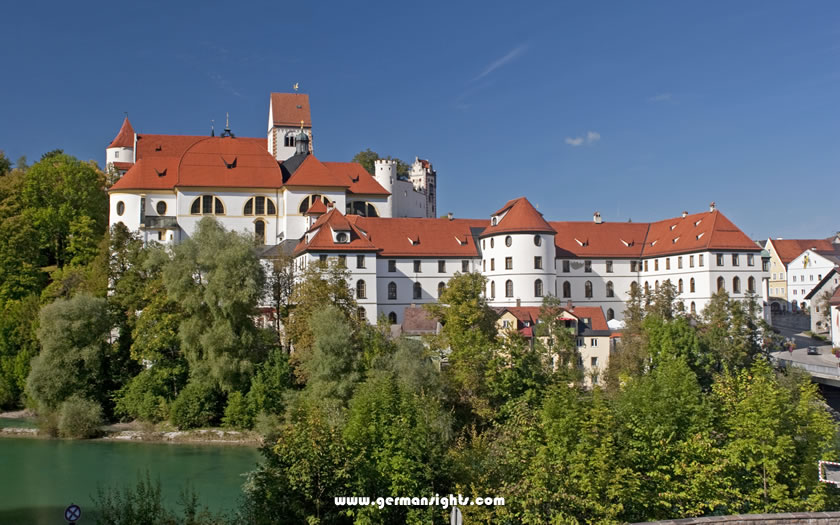 A selection of the Bavarian State Picture Collection is displayed in one of the wings of the Füssen High Castle. This fortification originally belonged to the Prince-Bishops of Augsburg and its imposing walls can be seen from most of the town.

The collection of paintings and sculptures offers works from the Middle Ages in this particular area of the Allgäu and Swabia, as well as allowing a visit to some of the impressive historic rooms.

The Füssen Tourist Office is situated outside the pedestrian area on the main road which goes around the historic centre. It is open Mon-Sat year round, and on Sundays and public holidays in the summer months and has plenty of information about mountain hiking in the surrounding area as well as day trip options to the Royal castles and other local attractions.
Website: www.tourismus-fuessen.de