Beilngries is a small town with a historic central core in the heart of the Altmühl valley nature reserve.

Although it is part of the nature park it is only a few kilometres from the main motorway connecting Munich to Nuremberg and thus makes a sensible and attractive base for exploring the area.

The main stream near the historic walls is the local Sulz river but both the Altmühl river and the Rhine-Main canal pass through the outskirts of the town before they meet downstream at Dietfurt. 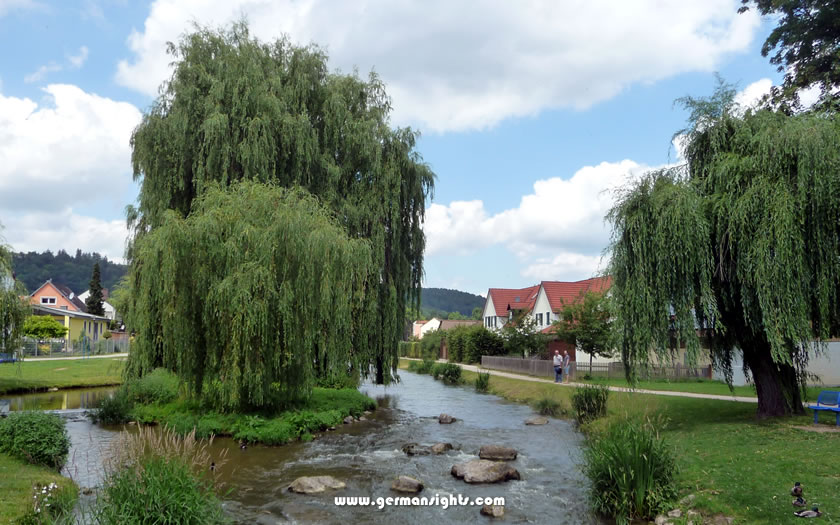 The park just outside the city walls on the Sulz river

More information about getting to Beilngries by road, public transport or air is available on our Beilngries travel page along with some options for accommodation:
Beilngries Hotels & Travel

Map of Accommodation in Beilngries

The town was first mentioned in the 11th century as a possession of the Eichstätt prince-bishops and received its market charter shortly after.

The historic sights of the town are mostly in the centre and surrounded by the old town walls which were erected at the start of the 15th century.

Nine of the former 15 defensive towers in the wall can still be seen. Many of them have evocative names relating to the profession of the town employees who lived in them or the uses to which they were put. 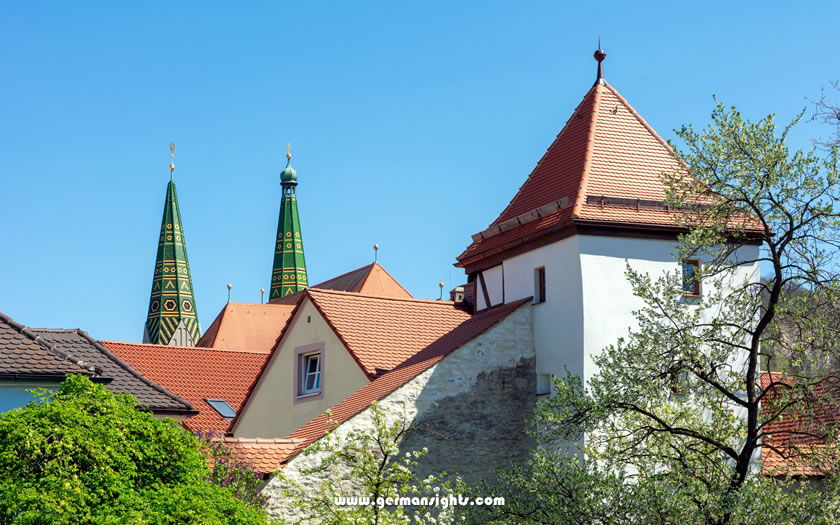 For example, the image above shows the Bettelvogt tower - occupied by an official who was employed to oversee licensed beggars in the town and to move them on once they had outstayed their welcome.

The walls also helped to protect the town during the religious wars of the Middle Ages. Beilngries finally became part of Bavaria during the Napoleonic era.

Apart from the former town fortifications there are a number of interesting historic buildings along the high street dating from the 16th century to the present day.

Some of them, such as the Kaiserbeckhaus near the parish church, show the stepped facades which are common in this area.

The town hall was built in the baroque style in the 18th century, while the facing parish church actually dates from the 20th century (although it was modelled on the original baroque style).

Just outside the town centre is the Frauenkirche, with its rococo architecture from the 18th century. On a nearby hill Hirschberg Castle can be seen, one of the former residences of the prince-bishops of Eichstätt.

The tourist office is located in the former grain store (originally built in the 15th century) and offers a pamphlet with a guided walk around the town centre.
Tourist Office: www.beilngries.de (German only)