Bautzen is a historic city in eastern Germany, located on a granite outcrop around 50km to the east of Dresden.

A number of the towers and fortifications constructed in the Middle Ages can still be viewed and the town is also the cultural and administrative centre for the Sorbs, a Slavic people and one of Germany's officially-recognised minority cultures. 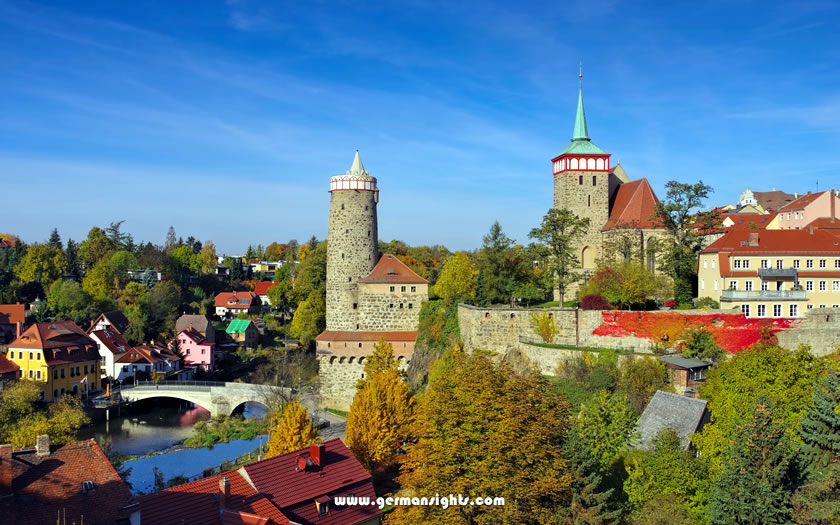 View of the town of Bautzen in eastern Saxony

Hotel and other accommodation choices for Bautzen and information about how to get there by car or public transport are available on the following page:
Bautzen Hotels & Travel

Bautzen is built on the site of a former Sorb fortification in eastern Saxony, although archaeological digs have shown evidence of earlier German occupation.

The Ortenburg heights above the river Spree had been used as a strategic defensive position in earlier times and, during the eastern expansion of the Germanic states, Ortenburg castle was built as a border outpost by the Margraves of Meißen. 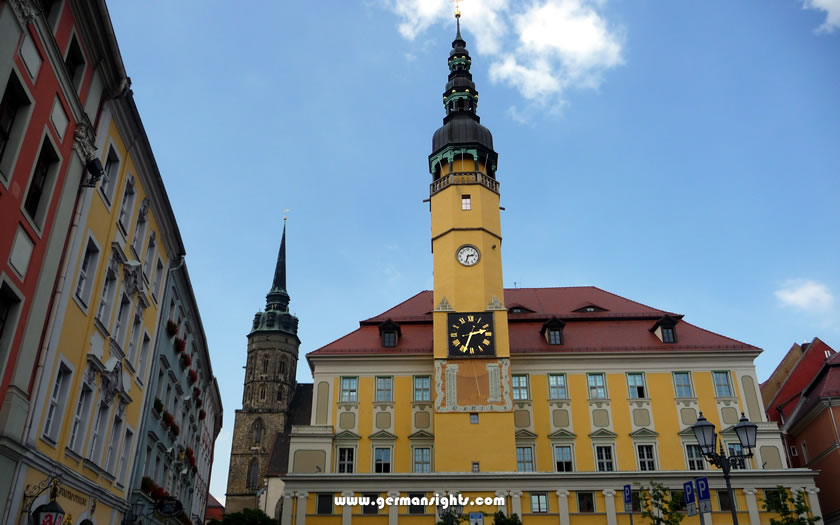 The town hall in Bautzen

As a border town in a strategic positions, Bautzen changed hands frequently in the early centuries of the Middle Ages, moving from the Holy Roman Empire to Czech control and into Polish hands before ending up in the Electorate of Saxony.

As well as being an important strategic point, Bautzen was situated on an important trade route. It formed the Six Cities' League along with other regional towns, like Görlitz, who shared the same interests. The League also had its own armed forces to protect traders on the economically vital route through its territory.

The cathedral of St Peter in the centre of the old town was built in the 15th century - unusually it shares both Protestant and Catholic congregations and has done since the 16th century.

The fact that Bautzen was the location of two famous battles shows its strategic importance and the reason for the city wall. The first was in the days of Napoleon where the French defeated a combined Russian and Prussian army, while the second was in the final stages of the Second World War, when a German counter-attack delayed the march of the combined Russian and Polish regiments on Berlin.

Street fighting in the latter battle caused the destruction of much of the city, although there has been significant restoration work in recent years. By 2011 over 80% of the listed building restoration work had been carried out.

The town is also famous for its mustard production ('Bautz'ner Senf') and hosts a special Mustard Festival in August.

Upper Lusatia and the Sorbs

Bautzen is known as the cultural centre of the Sorb folk - a linguistic and cultural Slav minority in German which is closely related to the Czechs and Poles.

The region settled by the Sorbs is known as Lusatia and Bautzen is part of Upper Lusatia.

The Sorb people settled Lusatia in around the 6th century but their leaders were defeated by the German forces bent on expansion to the east. 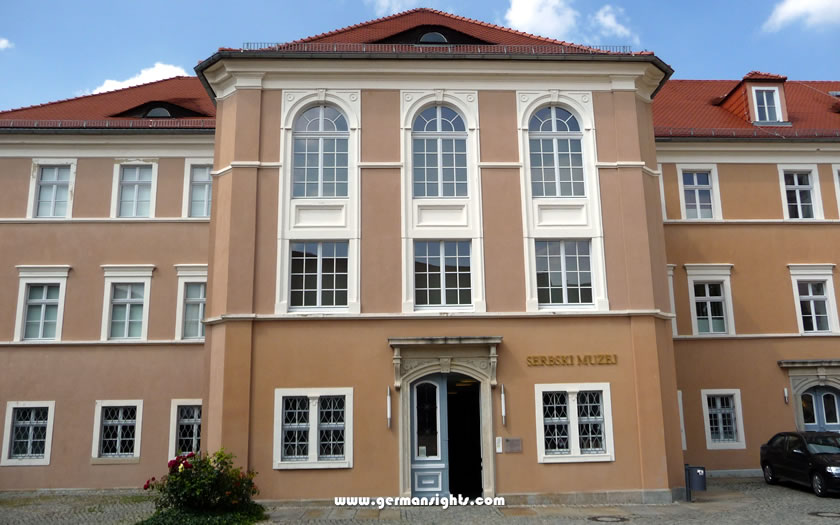 Despite influences from Saxony, the nearby Czech republic and Poland, the Sorbs have kept their own language and their traditions alive. Up until well into the 19th century, many of the villages around Bautzen were majority Sorb-speaking. Nowadays it is estimated that there are around 60,000 Sorbs living in Germany, an officially-recognised minority.

Bautzen these days hosts a number of cultural institutions related to the Sorbs (or the Wends, as they are sometimes known). Visitors to Ortenburg castle will come across the Sorb Museum (pictured above), while down in the town there are a number of cultural centres, such as the Sorb National Ensemble, the German-Sorb Playhouse, and the Sorbian Institute, dedicated to keeping the endangered language and traditions alive.

The tourist office is situated in the market square in the centre of Bautzen. It is open all week except Sundays with slightly restricted opening times on Saturdays:
Website: www.bautzen.de