Landshut is a former residence of the rulers of Bavaria in the Middle Ages and is these days the capital of the region of Lower Bavaria.

'Lower Bavaria' actually refers to the the river Danube and the part of eastern Bavaria which is further downstream, even though Landshut itself is situated on the Isar river.

The town is well-known for its re-enactment of a wedding from the Middle Ages - the Landshuter Hochzeit ('Landshut Wedding') is celebrated every four years and harks back to the festivities in the 15th century when the Bavarian ruler married the daughter of the Polish king.

As an administrative centre, Landshut has decent rail and road connections and a range of accommodation. Transport information and hotel details are located on our travel page:
Landshut Hotels & Travel

Like many towns in Upper Bavaria, archaeological finds date settlement back to the Stone Age. The area around Landshut was once part of the Roman Empire, which for a long time had its border to the north along the river Danube.

Although the 10th century saw habitation in the area, the town of Landshut was actually founded in the 13th century.

A previous fortress on the strategic heights later occupied by Burg Trausnitz had given the settlement its name (the German phrase "Hut und Schutz des Landes" meaning 'guard and protection of the state' is thought to be the origin of Landshut). 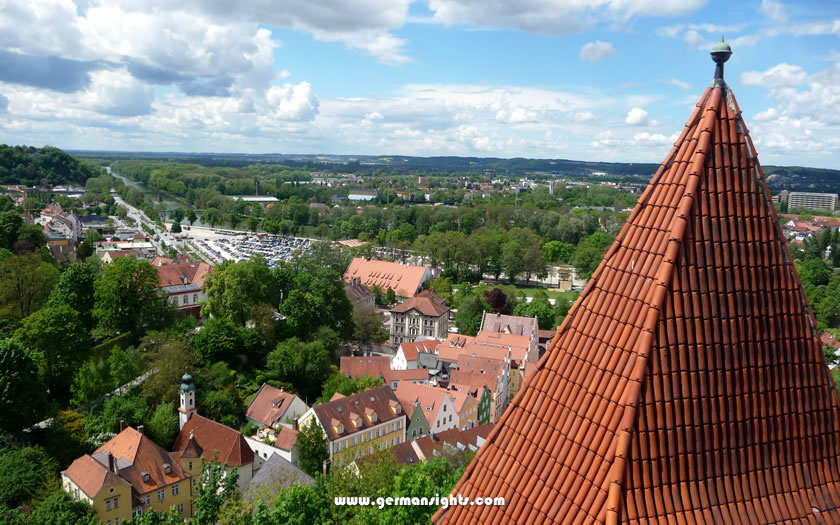 View over Landshut and the river Isar

The construction of the city in 1204 was ordered by one of the Dukes of Bavaria, Ludwig I, to control the crossing of the Isar and the important trade routes to and from the east which passed through the area. Landshut was perfectly positioned because the island in the Isar at this point enabled the simpler construction of two smaller bridges.

These advantages helped the town to expand quickly. The castle on the hill above the town was built at the same time and acted as the capital of what at that time was known as the Duchy of Lower Bavaria.

Bavaria was nowhere near the size of the state that it later became - instead the Wittelsbach family feuded, split and combined various duchies over the years. The duchy of Bavaria-Landshut was one of the family areas and this was ruled from the town.

Despite the political upheaval, this was the heyday of Landshut with the expansion and importance of the town aided by the profitable trade routes and the businesses and merchants that settled in this strategic position.

Like so many other settlements in this area, it was the combined effects of disease and war which put paid to the prominence of Landshut in Bavarian history.

By the 18th century it was something of a provincial backwater, overtaken by nearby Munich and other important cities to the north.

The 19th century saw something of an upturn, with the connection to the rail network and the start of industrialisation. In fact, the train station became so busy that it was relocated further away from the old town - something that helped the town avoid the devastating air bombardments of the Second World War.

Nowadays this town of around 70,000 inhabitants is a prosperous tourist destination profiting not only from its own history but also from the fact that it makes an ideal base for trips to other parts of south-eastern Bavaria.

It is also an attractive location for service industries because of its proximity to Munich and the airport and Landshut, with its low unemployment and flourishing economy, regularly features near the top of 'quality of life' surveys in Germany.

Burg Trausnitz is the castle prominent on the heights above the old town of Landshut.

It was built at the same time (the start of the 13th century) as the town was founded but only became known as Trausnitz later in its history.

One story says that the name Trausnitz comes from a German phrase which could be translated as 'don't dare to attack'! 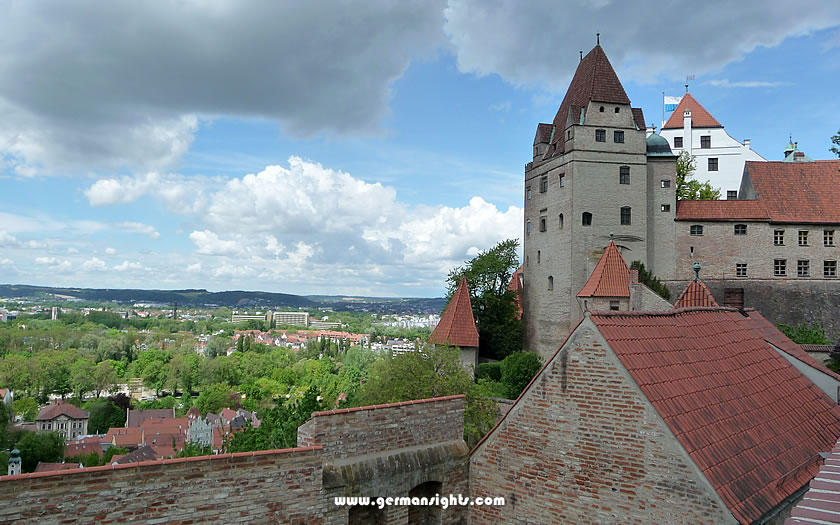 Once it was completed, the castle served as the residence for the Dukes of Lower Bavaria for more than two centuries and was extended and redecorated many times in different styles, with the medieval architecture and the Renaissance decoration still visible.

The defensive towers and the ring walls date from the 15th century and the reign of the prosperous Wittelsbach dukes, while a century later the use was turned into a more peaceful palace with Florentine designs.

By the time of the Baroque in the 16th century, the palace fell out of favour with the rulers and subsequently the buildings were used for purposes as varied as a prison, a cholera hospital and for the manufacture of silk and woollens.

Many (although not all) of the historic decorations were destroyed in a fire in the 1960s but it is still worth visiting the castle if only for its position above Landshut. There are guided tours available and it (as well as the Residence in Landshut below) is managed by the Department of Bavarian Palaces.

The Landshut Wedding is these days known as a historic re-enactment of an event dating back to the Middle Ages.

It draws a total of up to 700,000 visitors for the duration of the costumed processions, events and concerts.

The Landshut Wedding events are performed by more than 2000 local residents who must be members of a re-enactment society. The males, for example, let their hair grow longer if they are taking part and the town is redecorated in a more medieval style for the duration. 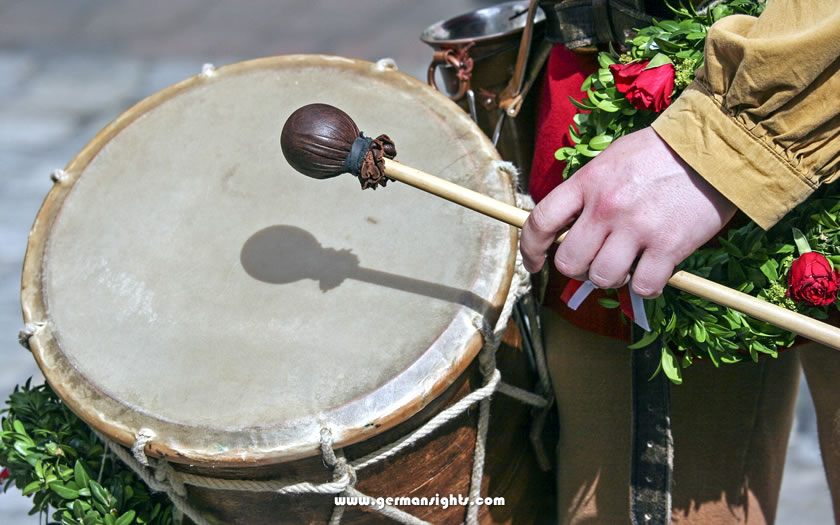 Part of the celebrations of the Landshut Wedding

The event that is being commemorated is the wedding of a son of one of the Dukes of Bavaria, George, to a Polish princess, Hedwig, back in the 15th century. In those days, this wedding served an important political purpose of fortifying the alliance against the pressure of the Turkish Ottoman Empire.

The pageant was first performed at the beginning of the 20th century and was originally an annual event. It has grown tremendously in popularity and now takes place over three weeks every four years.
Website: www.landshuter-hochzeit.de

Landshut's tourist office is situated in the town hall in the Altstadt (old town). It is open all year round from Monday to Saturday with slightly shorter hours in the winter months.
Website: www.landshut-tourismus.bayern